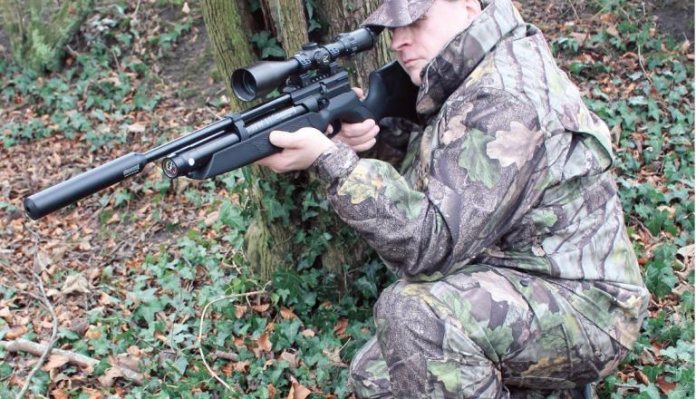 Although the hot news from Weihrauch is the nifty little uber carbine size HW110K I thought it would be beneficial to revisit the standard-length rifle it’s so obviously based upon. I mention this because I was fortunate enough to test a prelaunch model of the original just prior to it hitting the gunracks.

Today it’s become an established hunter PCP in its own right and as the rifle has now been slightly modified – here are my views since our first meeting.

Incidentally, I remember mentioning at the time, as I was so impressed with the gun, I intended to return to it once I’d used it in as many different hunting scenarios as I could – that I have so consider this a concluding conclusion on what is – discounting the HW101 – still the company’s only second model of multi-shot PCP.

Despite appearances, the ambidextrous stock is made out of beechwood and treated to a rubberised over mould. This ‘compound’ makes the rifle feel very sticky and grippy in the hold and certainly deserves its official and very descriptive Soft Touch designation

It features a very well-defined, high cheekpiece with a full rubber butt pad. The steep drop-down pistol grip has a very slim neck and thumb shelf while the trim yet nicely proportioned forend tapers gently upwards to end in a practical yet stark rounded edged angular tip. Though certainly not needed, but always nice to have are the twin panels of impregnated multi-directional chequering seen along both sides of the forend and grip.

The large colour enhanced numerical air gauge (manometer) is very easy to read and sits at the front of the air reservoir. Just behind this is the rifle fill point which when not in use is protected by a solid and well-sized friction fit plug. Using the supplied fill probe, from a recommended charge of 200-bar the rifle gives approximately 110 shots in .177 calibre and approximately 130 in .22 as per rifle on test.

The term modern is one that the HW110 deserves in bucket loads due in part to its overall styling but more so because the breech block, chassis, upper Weaver style scope rail (seen running uninterrupted along the top of the action) and barrel band are manufactured from a hi-tech ballistic polymer. Although this is new to the airgun scene, it’s a material that’s widely used in the manufacture of firearms. In other words, it’s strong tough and more than capable of coping with the knocks, scrapes and operational stresses an air rifle is subjected to in the field.

Bit on the side

The side-lever is similar in design to the 100’s but this time runs a large 10-shot wheel shape removable magazine. That might be 4-down from the Weihrauch flagship rifle but I’m sure many will agree 10 is far enough to have once you’ve just filled up with lead.

The magazine (as per 100) doesn’t protrude above the action but sits snugly in a very precisely machined housing. A noteworthy build characteristic is the action block not only sits quite high from the paired down and contoured sides of the stock but the magazine retaining catch and trigger safety lever have now been given a black anodised finish as opposed to the shiny nickel finish seen on rifles that initially came out on early production run models.

The magazine retaining lever is set at the rear right of the action while the trigger safety lever is positioned in front of the magazine well and has been manufactured so you have an operational ‘catch’ on both sides of the action. This not only gives it a true ambi-operational feel, but as some shooters prefer a safety to be on one side or the other – well, Weihrauch have here given us the solution.

The cocking-lever flicks effortlessly to the rear position on demand (pulling back), then to remove the magazine you need to lift the front of the retaining catch upwards.

However, as it’s under spring tension, you need to manually keep it in this position, or it will return thus preventing the magazine from being removed.

After filling all 10-chambers, you need to again lift the retaining catch, then you can slip the magazine back into the right-hand side of the action, release the catch and a slight ‘wiggle’ of the wheel will see it flick downwards indicating it’s taken hold. Finally, returning the side-lever to its original position probes a pellet out of the magazine and directly into the breech. At this point it’s wise to engage the ambi-safety lever by pushing one of the levers to the forward position, then when ready to take a shot, pulling either to the rearward position puts the rifle into live fire mode. At this point a red dot can be clearly seen on the action block to visually indicate status.

I scoped up with a low slung MTC 3 – 12 x 44 Mamba-lite in a set of suitable Weaver base twopiece Sportsmatch mounts and the optic soon showed it suited the rifle down to the ground. With a 25-yard zero, I soon began making ragged pellet size groups that even when taking shots right out to 45-yards only slightly widened into sub ¾-inch clusters. The 2-stage adjustable match grade trigger is a very precise unit that trips the sears crisp and clean. Accuracy is certainly aided by the predictability of the unit and the top-quality self-regulating valve system ensures a high level of shot to shot consistency. The firing cycle is best described as ‘dead’ and as expected the very effective time-tested and proven HE Silencer reduces muzzle report to absolute zero!

Considering the Weihrauch HW110 is lightweight, comes ready fitted with the company’s HE silencer, is accurate as any PCP on the market, handles and balances amazingly well then not surprisingly you have a recipe for success.

Add to this the modern styling, hi-tech polymer action result in a very user friendly, practical, all-weather, tough hunter PCP that can and always will go the distance.