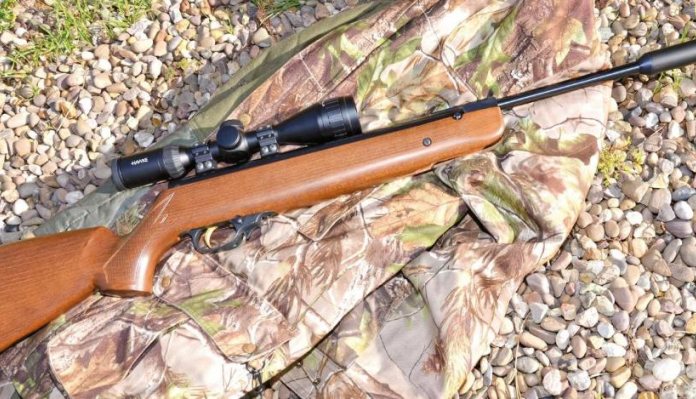 Whilst Theoben sadly no longer exist as a company, their legacy is assured. For their ingenious idea of replacing the conventional mainspring in a traditional airgun, with a gas-ram, (back in the early ‘80’s) was a seriously inspired move and also, a huge success. Now much copied by many of the mainstream manufacturers across the world, but, it’s fair to say, it has been very rarely equalled. In essence, the system uses an inert gas or air filled and pressurised piston and rod assembly that is compressed in the normal manner, either by breaking the barrel or operating an under lever; given the gun type. When fired, the rod, which sits down in the piston, is released and reasserts itself at high speed, so a sort of ‘air spring’.

One model, which is on a par with Theoben’s own Sirocco derivatives, is of course the Weihrauch HW90K; on test here. No surprise really, since this rifle’s technical credentials were originally arrived at through a major tie-in between Theoben, at the time based in Cambridgeshire, and this great German brand. The ‘90 has stood the test of time, and whilst the air of originality may have gone, this solid old workhorse remains a stalwart in their product line-up. With plenty to offer the enthusiast, it speaks volumes that’s it’s still a highly viable product in their portfolio.

Now all made in-house in Weihrauch’s Mellrichstadt factory, (Theoben made and supplied the original gas-rams I believe) the HW90K has otherwise remained largely unchanged, from its original specification, deemed ‘cutting edge’ at the time. A break-barrel configuration, complete with Weihrauch’s signature chunky adjustable breech bolt, the gas-ram power plant, quality two stage Elite trigger, beech sporter stock, resettable safety catch, and their own renowned silencer, are all part of the deal.

First impressions when you lift the HW90K, is of a solid and well-engineered rifle, with bold styling and that classic air of quality that Weihrauch are known and loved for. It is quite a handful though, and at 8.8lbs un-scoped, this model sits firmly in adult territory. An oversized cylinder of 35mm diameter is there to give Weihrauch the opportunity for FAC energy levels, which all adds to the weight, but the mirror finish chemical bluing and all-metal construction, can’t fail to impress.

OK; the relatively shallow chequering on the grip isn’t in the league of Weihrauch’s of old, but overall, the usual mix of wood and steel upholds the company’s pedigree. The stock is a modern beech sporter, but offers a dedicated right hand raised cheek piece. I’m not quite sure why Weihrauch don’t just design an ambidextrous version of the butt, given the relatively bland configuration, aimed at the average shooter. That said, the slimmed down forend tip, smart recoil pad and drop down grip all work well.

Cocking the HW90K needs a small jolt at the breech to release the barrel, but the subsequent stroke, is super smooth and fairly easy, when completed in one quick sweep. Insert a pellet flush into the crisply machined breech, snap the barrel closed, and the shot is ready. The ‘90 has an automatic safety catch, which is set once the action is cocked, but the design is nothing if not thorough. Press the small button just forward of the trigger to put it into FIRE mode and press the small triangle at the front of the guard to set it to FIRE if you so wish. Alternatively, the action can also be decocked.

So, just what is the benefit of the gas-ram? Well, by using a contained chamber of air to compress, instead of a mainspring, all the usual twang resonance and vibration is eliminated, as the shot is released. Instead, we are left with an ultra-quick snap, which gives a super-fast lock time, measured in milliseconds. Yes, there is still recoil, but it is slick to say the least. I would recommend the use of a one-piece mount, as with any recoiling airgun, which should guarantee that the problem of scope creep doesn’t occur. Scoping up overall is easy here, with the usual generous length of dovetail, and arrestor mounting points drilled in the receiver.

And so, to the business end of this test. The classic Air Arms Diabolo Field pellets are so often my go-to ammo, by virtue of the fact that they more often than not, edge the accuracy tests. Joining them here, were the lighter Bisley Long Range Gold (LRG), and the mid weight Daystate Rangemaster Li’s. Over the chronograph, my test rifle, returned fairly textbook figures of around 11 ft/lbs of energy, with both the Diablos and LRGs, whilst the Rangemasters posted around 10.3ft/lbs.

In terms of accuracy, do your bit, and this model will return groups of better than ½” centre to centre over 30 yards, with compatible ammunition. I did just that, from my over knee, FT sitting position, with both Air the Diabolo Fields, and Rangemaster Li’s. With the LRGs not far behind, I had proof enough that my test model at least, was anything but pellet fussy. The ‘90 is a big bold air rifle, and is not for the feint hearted, but if its returned weight isn’t a problem, then this model has to be a sound investment.

The small screw at the rear of the cylinder is the air release and entry point for the gas-ram unit incidentally; so, if you purchase a comparable Slim Jim style pump for the task, you can keep a check on power levels, and increase or decrease the internal contained pressure as necessary. All part of the enjoyment of owning this particular model in my book.

Admittedly, the frenzy for gas-ram models seems to have subsided somewhat for now, but that hardly detracts from the validity of the HW90K. Weihrauch wasted no time in exploiting Theoben’s ground-breaking idea and this polished performer remains one of the very best gas-ram powered airguns on the market today. Bold, quirky, and every inch a Weihrauch Classic.