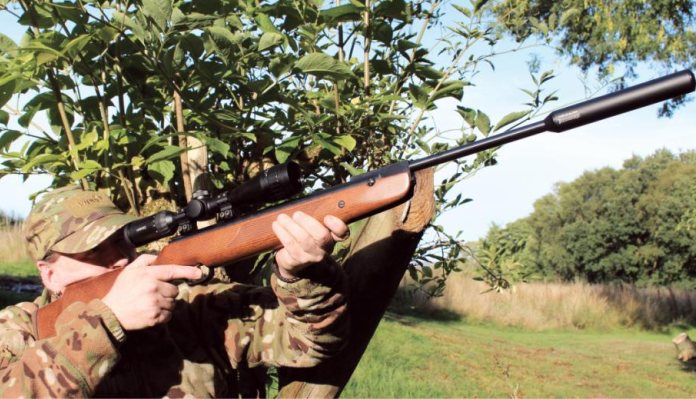 The original HW95K has been with us for quite some time and was always a stalwart, reliable springer but, in some ways, seemed to be a much undervalued and underrated model in the Weihrauch roster.

In a way, this was understandable when you consider the original had a very bland and basic stock design and what some mistook for a silencer was actually a steel muzzle weight; the only redeeming feature of this ‘chunk’ o’ steel, was that it made itself useful as a cocking aid. But, for those in the know, the 95K was a wolf in sheep’s clothing, as the internals and action weren’t a million miles apart from the HW80. In that respect, hardly surprising so many custom houses and tuners used the 95K as a base chassis to tune-up; the most known and revered being the Banshee that after Tony Wall (co-owner) and resident ‘airgun guru-smith’ at S.F.S had worked his magic on, was transformed into a highly sought-after breakbarrel. The end product has a very smooth firing cycle plus, after the muzzle weight was dispensed with, it often had the tube shortened and screw cut to accept a silencer of choice.

So now to the new look and, quite grandiosely named, HW95K Luxus with Silencer. This is Weihrauch’s official name for this model, Luxus relating to the stock design and obviously ‘with Silencer’ is self-explanatory. The Luxus stock is a very aesthetically pleasing and quite stylish piece of furniture that plays a huge part in the transformation of this rifle’s modernised appeal.

This fully ambidextrous beech wood handle now boasts a very well configured, medium height cheek-piece that’s made even more distinct due to its straight angular edges. Shoulder fit is catered for by a nicely contoured, brown rubber buttpad with a black line spacer.

Moving forward towards the trigger, you notice the stock has been paired back, so that the grip is much easier to hold, as the heel of your shooting hand has more allowance to nestle into the stock before it swells out into the steep drop-down pistol grip. A slight thumb shelf sits aloft the top edge of the neck; all these features now making a big difference into how the rifle feels in the hold.

The slim forend fully complements the rear section of the rifle and, although being quite deep in profile at this area, has a nicely rounded underside. For assurance in the hold, there are long panels of finely-cut chequering on both sides of the forend and two either side of the pistol grip. Maybe just for cosmetics, the forend ends in a rounded tip but even here it stylishly yet very subtly tapers in from either side.

The cocking stroke is very smooth and not overly strenuous, the operation of which is certainly aided by the company’s HE silencer, which doubles up as a very useful cocking aid.

Lock up in the open position is very secure and at this stage of operation the automatic trigger safety also engages. After thumbing a pellet directly into the quality tube, when returned to the closed position, due to the well-sized wedge shape steel detent and generously size breech seal, lock up is solid and airtight!

Incidentally, as there’s no anti-beartrap mechanism, the rifle can be de-cocked at any time by simply pushing in the protruding safety button on the left-hand side at the rear of the cylinder. Then, while holding the barrel in the cocked position, pull the trigger, while allowing the barrel to return (under control of your hold) to the closed position.

This scope-only rifle has quite a lengthy run of deep, well-cut dovetails, with the addition of three scope mount stud arrestor holes to prevent scope creep. I opted to fit a Hawke 3-12 x 40AO Airmax with AMX reticle; one of the re-vamped scopes from the Airmax range and one of a size and type that suits a rifle such as this perfectly. Obviously, the legendary Rekord trigger unit aids accuracy, a 2-stage fully adjustable unit that is still classed by many as the industry standard by which other similar trigger mechanisms for a springer are judged. The nicely curved steel blade (as is the adjuster screw) are gold anodised, giving the rifle an air of class. As for the unit, itself, when adjusted to suit, it releases shot after shot without a hint of creep. Recoil is low for a full-power springer and the company’s own HE (High Efficiency) silencer does an excellent job of quelling muzzle repot.

I was soon making ragged ½-inch groups at my 25-yard zero and the rifle proved it was certainly capable of maintaining kill-zone accuracy out to 40- yard. As a matter of interest, the original silenced versions of this rifle pushed the tape to 49-inches, thankfully these rifles now measure 45.5-inches from butt to tip with silencer fitted.

Some will still find this a tad lengthy and to be honest I’m sure the barrel could stand being shortened further. However, even scoped up it’s still a reasonably light rifle plus handles and balances more than adequately.

So, to sum up, the HW95K Luxus with Silencer is now a much better option for those looking to get a very smooth firing, highly accurate, well-balanced and ready silenced springer straight off the shelf. It’s not that surprising considering the rifle features those familiar Weihrauch goodies we’ve now come to expect from them, such as the Rekord trigger unit, quality barrel and action plus a silencer that performs so well.