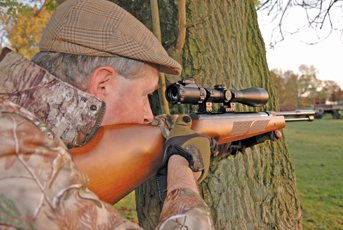 Based on the iconic HW77, Weihrauch’s fixed barrel HW97K takes the concept even further Laser cut chequering on the well-shaped grip The rifle has a semi-angular but stylish fore-end

In the world of spring powered airguns, few manufacturers can boast the pedigree of Weihrauch. This renowned German manufacturer is held in high regard for good reason too, and with a comprehensive range of rifles and pistols to suit most tastes, all manufactured in the time honoured way, their loyal fan base seems assured.

Built To Last
The HW97K, under the spotlight here, is a classic example of the marque. My test rifle has been supplied in the sporter stock, and very attractive it is too; whilst a thumbhole stocked version with the same ’97 action is also available…

This classic under lever is the flagship springer in the line-up, and it’s a robust answer to PCP power, if the thought of air tanks and such like doesn’t appeal. Solid, traditional engineering means that Weihrauchs are built to do a job, and last the course; with the possible down side that many of their full sized models can become a handful over a lengthy session. The HW97K feels every inch an adult sporting airgun, and since it tips the scales at well over 9lbs, this is defi nitely a serious tool for the more mature shooter.

It’s been well documented, not least by myself, that these rifles represent the pinnacle of spring powered airgun design - certainly where production rifles go. With the notable exception of Air Arms and their top class TX200 models, few other manufacturers can compete with the likes of the HW97K and it this that makes it such an important rifle in Weihrauch’s line up.

Fixed Barrel
For anyone unfamiliar with this type of rifle, the HW97K offers the shooter serious accuracy potential by virtue of a fixed barrel, secured within the breech block. To load the rifle, the under lever, running parallel with the barrel, needs first to be unclipped and then pulled all the way down and back, until the trigger sear engages with the piston, and the safety button clicks into position. At this point, and with a firm grip on the under lever, a pellet can be fed directly into the lip of the barrel. Being able to directly feed pellets is invaluable, since it enables the shooter to feel how well a pellet fits or mates with the rifling in the barrel. Some pellets may feel slack, and likewise, some too tight. In either case, the shot can be called.

A safe regime makes sense with this style of rifle, and if adopted then there should be no cause for concern. The issue arises with an open sliding breech, where fingers feel vulnerable. Weihrauch fit an internal anti-beartrap device which means that the lever should not be able to return under spring pressure, with fingers still inside the breech area; yet the best policy is always to keep a tight grip on the under lever as a pellet is chambered- every time!

Extras Included
The concept of the HW97K was always to include the features which were previously considered optional extras on its predecessor, the original HW77 model (still available). Where customizers such as Airmasters would re-machine and open out the breech area- to allow easier access, so Weihrauch went on to widen the breech - with the result that loading the ’97 is now easy. Likewise that under-lever retaining catch and integral silencer assembly; once an expensive add-on – are now fi tted as standard. With a spring loaded release button at the muzzle, the lever on the HW97 is effectively locked. This means the fitting of a sling swivel to the lever is an option, without having to worry whether the lever will spring open under tension.

All the metalwork on the HW97 is supremely well finished; being evenly polished, then treated to a deep lustrous chemical blue. Full length dovetail scope rails run along the top of the cylinder, and with the usual three arrestor stud holes present, the fitting of a scope is relatively simple. I say ‘relatively’, since care has to be taken to make sure that a particularly long scope body tube doesn’t foul or obstruct the sliding breech area as it opens. Having enough clearance in this area to chamber a pellet is a prime consideration, and just something to bear in mind.

Finally action wise, the gold finished Rekord trigger is the icing on the cake, completing a spec list which has to make any self respecting enthusiast’s mouth water.

Taking Stock
The beech sporter style stock comes supplied with a highly attractive walnut finish, and having seen many examples of these in the flesh, I’m confident that my rather appealing test rifle is representative of the average rifle.

A dedicated higher cheek piece on the HW97K means that eye scope alignment is far more likely to be satisfactory, when compared with the compromise that comes with a stock designed primarily with open sights in mind. Add to this a stylishly angular fore end and four panels of laser cut chequering, and the spec begins to stack up nicely. OK; back in the real world, many owners of these rifles will be binning the stock altogether, and fitting custom woodwork from the likes of Custom Stock in Sheffield, or even a completely bespoke design from one of the many specialists on the FT scene; yet the fact remains that as factory furniture goes, this HW97K can hold its own with the best of them.

Home On The Range
Cocking the ’97 admittedly requires significant effort, and the relatively short carbine length under-lever needs to be gripped firmly for safety, in the process. As previously mentioned, the manufacturer fits an internal safety system which should prevent the breech from slamming closed under pressure, yet good practise dictates that that lever be gripped throughout the operation. My batch of Daystate Li pellets just felt right as I chambered them directly into the barrel; yet time would tell if that apparent compatibility would translate to tight groups down range.

Performance is what these guns are all about, and with the HW77 one of the most successful Field Target rifles of all time, it should come as no surprise that this HW97K, as an effective upgrade, can shoot!

As for the firing cycle, no spring resonance was present, with the action feeling both snappy and crisp. Some felt recoil is generated, yet the sheer mass of the rifl e goes some way to keeping this to a minimum. Take the trouble to tune these rifl es though, and experience tells me that an even slicker performance awaits.

Over a ten shot string, Daystate Li Pellets showed a variation of 18fps. Accuracy was stunning with a variety of pellets, including Daystate Li’s, and Air Arms Diabolo; producing genuine quarter inch clusters (c-t-c) at 30yds.

Dual Role
OK; so we’ve seen just what this pedigree piece of kit can do; but it’s time to consider what role it can play. If an all day hunter tops the wish list for example, then this 97K may prove just a little too weighty for some; certainly where lengthy sessions are concerned in the field, and here something lighter from Weihrauch’s extensive range may suit better. Yet where a dual role is envisaged, i.e. a rifle that can perform in FT or Hunter Field Target, and also carry out the odd hunting duties, as and when required, then the HW97K really takes some beating.

All in all then, shooting this HW97K just reminded me why we all fell in love with the HW77 all those years ago. Yes, the guts at the heart have largely remained the same, but with subtle improvement coupled with that legendary Weihrauch build quality, this ground breaking design just goes from strength to strength. In short, where spring power is concerned, this rifle is about as good as it gets! GM