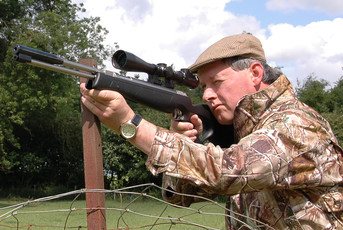 So Weihrauch finally did it. Dropping their flagship HW97 spring-powered action into a lump of plastic may seem a retrograde step to traditionalists like myself, yet devotees of the black arts carry sway these days.

Let’s face it, if the likes of Weihrauch are jumping on the bandwagon, we can be sure that not only will their market research have suggested that serious sales are to be made, but that there are merits in such a move too.

Bowing to trends then is all very well, but has anything been conceded in the process?  I planned to find out.

Weihrauch’s model HW97, for the non disciples amongst us, is based on their ground breaking HW77, which put a smile on our faces way back in the mid ‘80’s. Fixed barrel accuracy, coupled with the renowned Rekord trigger, gave us competition standard performance from the off.

Custom house such as Airmasters and Venom, fine tweaked these beauties, until every ounce of performance was extracted… and as the silverware mounted up, a legend was born. The HW97 was a response from Weihrauch, to offer the discerning shooter a few extras that the customizers were already building into the HW77. Details such as the fully opened up breech and integral silencer/lever catch assembly, were all extras on the HW77; yet come as standard on the HW97K (the K indicates a shorter carbine barrel).

Beefed up woodwork completes the standard HW97 spec, yet this new STL synthetic option adds another dimension to the class-leading action. The composite moulding mirrors the configuration s of Weihrauch’s thumbhole design - and that in itself is no bad thing.

As if the stock wasn’t radical enough (and I’ll return to it in a moment) on my test gun, the fact that the action came delivered in the new STL stainless spec, had me salivating at the prospect; and first impressions are highly favourable.

The manufacturers use the term ‘nickel finish’ to describe the process, and I have to say that the subtle matt look to the metal work is very attractive. Looks wise, there’s surely no contest where this model is concerned, with the contrast of the nickel action against the black of the stock and silencer is visually pleasing. I’d opt for it over the standard blued action every time, and with Weihrauch’s usual standard of engineering lending the HW97 an air of authority, the overall look is stylish rather than garish.

In the early days, Weihrauch toyed with several different designs for the lever catch, and whilst we have to excuse them the use of plastic, the established press button cap below the muzzle is a neat affair. In addition, the lever is now fitted with rubber to eliminate any rattle between itself and the barrel, which all adds to the air of sophistication

So just what is it with these black stocks at the moment? Well obviously trend does play a part, but sound practicality has much to do with it. Take any rifle out into the field and get it soaked in the rain, and after a while, the woodwork will discolour at best, and possibly swell up if moisture penetrates and invades the grain fibres.

By contrast, synthetics are impervious, which means in practice, they are stable in most conditions. Extreme temperature change can warp wood, which in turn, can pull the rifle’s action out of alignment, possibly affecting the zero. Synthetic compound stocks are far less prone to this, making them the stock of choice for hardy outdoor types. Personally, I try not stick around when the wet stuff arrives, but sometimes needs must… as they say.

Handle this HW97K and it soon becomes clear that the stock is totally ambidextrous. At 8.7lbs unscoped, this is not a rifle for wimps, yet it points and balances beautifully, with a bias towards the muzzle; helping to keep the rifle on target. Generous finger grooves are all part of the configuration, as is the raked back pistol grip and relieved thumb-hole. The styling is typical of this famous German brand, and whilst it manages to please for the most part, it’s not perfect in my book. The cheek-piece would benefit from some crisp definition and greater height, whilst the butt pad must be the least luxurious in Weihrauch’s illustrious product line-up.

Being a carbine, the cocking lever is fairly short, so cocking effort is significant, yet if a quick deliberate stroke is adopted, most adults should be equal to the task. Correct procedure with these rifles is always to hold the cocking lever tightly in the left hand once the cocking stroke has been completed, whilst chambering a pellet directly into the barrel with the right. This is doubly important, since no ratchet device acts whilst the stroke is in motion.

With a pellet pushed flush in the breech, the lever can be returned and the shot taken. The safety catch is automatically applied with this and other Weihrauch models, so this needs to be nudged off first.

I shot this stainless beauty over 30yds to check what I already knew - namely that these guns are among the best performing spring powered airguns on the planet. Despite significant recoil and a less than perfectly set trigger, tight clusters formed with both brands of pellet selected. Around 3/8” was the norm, but I know from experience, that with a professionally set trigger and tuned action, these groups will get even better for sure.

Chronograph readings were impressive too with 10 shot strings returning 9fps and 8fps spread with RWS Superfield and Air Arms Diablo Field respectively. All in all, sound performance from one of the benchmark actions on the market.

I had visions of this rifle really looking the part, yet letting itself down in the field due to the glare from a reflective action. Having now taken it out for a trial run, I reckon there’s little to pick between this matt finish nickel and traditional blueing, with regards to spooking the quarry. Weight is my only reservation, with this model, and it has to be a consideration with regards to personal taste in this area.

The shape of things to come, maybe, and with the introduction of this synthetic option, one of the biggest names in airguns have shown themselves to be responsive to market trends and needs. There’s now a model for everyone, and for a hard-hitting, blisteringly accurate adult sporter, capable of competition grade performance, this HW97K STL Synthetic is about as good as it gets.