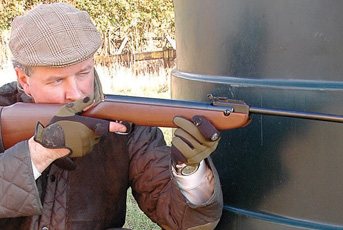 The HW30S is one of Weihrauch’s junior break-barrel air rifles, but Mark Camoccio finds that when it comes to accuracy, it’s right on target I’ve long been a fan of the German manufacturer Weihrauch, ever since handling the all conquering HW77 underlever that more or less won everything back in the early days of Field Target competition. Yet still it took me quite a while to appreciate that Weihrauch don’t just cater for the rabidly competitive among us; they really do have a model for everyone, and that includes youngsters and novices alike. Let’s face it, they’d be crazy not to cater for such shooters, since they represent the new blood that’s so vital for our shooting sports to flourish.

At this stage, I’ll lay my cards on the table and admit to dismissing the junior section in Weihrauch’s product range, as bland and fairly lack-lustre… without of course ever contemplating trying one! Well that’s all changed, and I’ve recently been evaluating one of Weihrauch’s lesser known models in the form of the HW30S; and I have to say it’s changed my rudely dismissive outlook for good.

This is simply a cracking rifle, so if you have a moment, pull up a chair, and let me explain why.

Firstly, whilst there are lower specification junior models in their line-up, this ‘S’ version of the HW30 is slickly presented as a mini version of everything the company does best.

Weihrauch’s build quality is legendary, and the sheer robustness, combined with a level of engineering and finish, is the hallmark of their work. This HW30S cuts no corners on that score, and it really does feel every bit a quality sporting rifle, just scaled down for smaller shooters. The beech stock is classic fare from this manufacturer, displaying attractive graining through the thick coating of varnish/ lacquer. Configuration wise, the diminutive proportions are spot on for this rifle’s target audience, with the length of pull (the distance from the trigger to the end of the butt) sensibly reduced. As one of the key complaints from youngsters, when I’ve been coaching at my club, that the stock is simply too long at the rear, this area is clearly vital to get right on a rifle which is specifically aimed at them.

Yes, the styling is fairly bland, but keeping things simple is no bad thing on what is effectively a training rifle. The sleek fore-end sports the latest tapered style at the tip, and feels really comfortable and accommodating in the aim. Whilst the stock is technically dedicated to right handers, the subtle definition of the cheek-piece is such that, to all intents and purposes it can be considered ambidextrous; which again is no bad thing. A well shaped reddish brown rubber but pad caps off the stock nicely, and the overall impression is one of a well engineered, supremely finished, traditional airgun.

All the metalwork is beautifully polished and finished with a rich, lustrous blueing, to the standard that we have come to expect from this most respected of manufacturers.

As a good old break barrel, the sheer simplicity of design makes for relaxed shooting, and any newcomer needn’t worry about being overawed by complicated technology here. This gun simply ‘does what it says on the tin’, to coin the cliché, yet a surprising list of extras are included, to just make the whole shooting experience that bit more enjoyable.

The usual Weihrauch over-engineered breech arrangement is here too, i.e. a chunky adjustable cross bolt, allowing the breech jaws to be tightened if any wear should arise over the years. Since this will probably never see use, and is obviously about peace of mind further down the line in any case, of more relevance to the shooter is the fact that open sights come fitted as standard - and they’re rather good.

An all metal affair, the sights comprise of a hooded fore-sight, and fully adjustable rear sight. Bear in mind that the fore-sight comes complete with no less than six interchangeable elements (inserted by unscrewing the base of the hood), and that the rear sight incorporates a reversible plate to alter the size of the notch, and it’s clear that the HW30S has been well thought out indeed. One observation at this stage concerns the fact that the hood on the test rifle’s fore sight assembly was astonishingly tight, but after a little use, and maybe a light application of oil, this minor detail should become irrelevant.

Cocking the HW30S’s 15.5inch barrel reveals a smooth, fairly easy cocking action; especially when a positive sweeping stroke is adopted. Thumbing a pellet into the breech is a simple affair, then snap the barrel back up, nudge off the push button safety at the rear of the cylinder, and away you go.

With such comprehensive open sights on board, I decided to evaluate this rifle with those first, since a combination of relatively low power output and hence close range use, gives the ‘irons’ far more relevance. Basically, the sights are too good not to use, and with a crisp sighting image afforded, I posted ragged key hole groups at 10 yds, and 2p sized efforts at 20yds. The Rekord trigger obviously helps enormously, and having that quality asset fitted as standard certainly elevates the HW30S’s standing against most junior rifles on the market.

Fitting a scope is well catered for with dovetail rails and arrestor receiver holes, ready and waiting. With a scope fitted, accuracy of around 3/4inch at 20yds was the norm, which means novices and juniors alike can be rewarded, once their technique improves.

Yes of course, there are many cheaper alternatives out there, but having experienced several youngsters who have turned up at my club with bargain basement Far-Eastern atrocities, I can only stress that in this sector of the market, you very often get exactly what you pay for. Badly formed, dangerously sharp components are not conducive to good shooting, so
avoid!

By contrast, the Weihrauch HW30S is a slick, smooth operator, designed to nurture the new intake; and as such, plays a vital role for the company and the sport.

I wouldn’t hesitate to recommend this rifle, for the simple reason that it isn’t made down to a price. Pride of ownership does come into the equation, and with good accuracy on offer, in a beautifully presented, traditional format, the HW30S is the ideal rifle to put a smile on any youngsters face.