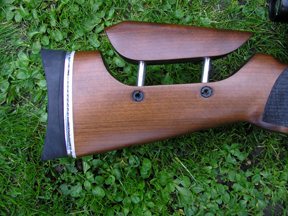 This month I'm spotlighting two relative heavyweight, break-barrel designs from top German manufacturer, Weihrauch; seeing what makes them tick, and what they have to offer.

The HW98 and HW90 are, on the face of it, two of a kind; yet looks deceive – and whereas the ‘98 is a conventional spring/piston design, the ‘90 takes a something of a different approach.

Weihrauch's HW90 model has been around for quite some while now, yet the very fact that it has managed to retain its place in their illustrious line-up speaks volumes for the original blue print, and the rifle's ever-green appeal. Whilst it could be described as a little plain, it certainly isn't basic!

Visually, the HW90 looks conventional, in the classic Weihrauch mould. It's a high quality, no-nonsense gun, traditionally made, yet utilizing modern techniques and updated features were necessary. It's a case of German engineering housing on-board English know how in the form of a ‘gas-ram'; and if you've yet to encounter one of these, then allow me to enlighten you. The gas-ram is the result of a deal struck with the English company, Theoben, some years back, to utilize their revolutionary system in one of Weihrauch's own models. Think of the gas-ram itself as similar to a motorbike air suspension fork (the initial inspiration to it's designers after all). When the rifle is cocked in the conventional manner, a sealed chamber of air is compressed by the drawing back of the piston (instead of compressing a mainspring). On firing, the piston is released, and the compressed air behind it forces the piston forwards. From this point on, the gun acts like a conventional springer, with the piston compressing the air in front of it, and powering the pellet. The air contained within the sealed unit should never escape, and in theory will give very long lasting performance to the rifle.

By contrast, the HW98 uses a solid, traditional spring/piston arrangement; yet there's more to it than that. Something of an under-stated rifle, the HW98 offers something a little different – slightly departing from the conventional, and to my mind, has no obvious rivals.

It's a bit of a curio, and a very appealing rifle; best described as a cross between a target rifle and a sporting rifle –and certainly looks the part.

First impressions are one of a fairly heavy, very solid, adult rifle for the serious shooter. It's not actually that heavy for this type of gun, just built to last. Several obvious features stand out straight away; such as the chunky ‘bull' barrel, the large panels of black stippling, and the fully adjustable butt and cheek-piece of the stock - all adding to the precision target feel.

Details, such as the wedge shape applied to the breech end of the barrel add distinction, and a superior air. In short, it looks superb. The whole barrel end diameter of over .75inch comprises of a 3mm thick barrel sleeve shrouding the barrel, neatly retained by grub screws to the underside.

The HW90K has that same robust level of machining, and the model I had for test here was the ‘K', denoting carbine – i.e the 14inch short barrel version, as opposed to the full length standard model. The barrel is capped off with a very smart and well proportioned barrel weight. This obviously looks the part, and also gives much needed assistance when cocking the action. I'd normally opt for a longer barrel, just for the balance alone, but in the case of this ‘90, the weight is well distributed. However, 8.5lbs, in this type of rifle, is not for the feint hearted, so the ‘90 has to be labelled a serious adult sporter.

One point to note, according to Hull Cartridge, the UK importers, is that future carbines may be supplied with shorter barrels (by 4inches) and the larger Weihrauch silencer, to compensate for the change in balance.

By contrast, the ‘98 is fractionally lighter than its stablemate, by a quarter of a pound.
With regards to finish, both rifles are evidence of Weihrauch's wealth of experience, sporting a supreme chemical blue throughout.

Weihrauch have been manufacturing break-barrel airguns for longer than I care to remember, so as you'd expect, they've pretty well perfected the system.  Both rifles benefit from a solid breech arrangement, so peace of mind is assured. With two ‘dirty great' bolts, one either side of the breech, any play in the barrel lock-ups after a few years service, could be speedily nipped in the bud by applying further tension on the bolt. It's unlikely to be an issue, yet the over-engineered approach and attention to detail is to be applauded.

One of the features that sets the ‘90 apart, and makes it instantly recognisable from the pack, is the large, distinctively shaped trigger guard housing. Finished in a smart matt grey that nicely matches the rifles blueing, the oversized guard houses a re-settable safety catch mechanism. The unique shaping enhances the classic hunting rifle profile too; giving the rifle real character into the bargain.

The HW98, meanwhile has the usual Weihrauch automatic safety and button to the rear of the cylinder. Both rifles have full length cut scope rails and provision for arrestor studs, machined into the cylinder, so mounting a scope should be no problem.

A quality rifle is nothing without a decent trigger, and thankfully both of our featured guns come well equipped. The ‘98 has the world famous ‘industry standard' Rekord unit, while the ‘90 has the Elite unit, which was specially made to work in tandem with the gas-ram. Both systems are on a par – and by that I mean darn good for sporting triggers – being crisp and predictable.

It's time to look at those stocks - the other area where these rifles really contrast. Largely following a similar basic pattern, the ‘90 is pure convention, being of a varnished, plain beech sporter configuration. The shape is well rounded and includes a substantial pistol grip with pressed chequering panels. A subtle brown rubber pad sets off the but, and the stock is comfortable on aim, in its field environment.

The HW98 on the other hand, takes much the same shape, but includes large panels of high-grip stippling; extensive in the case of the underside of the forend, and highly functional when applied to the pistol grip. Some attractive cut-outs on the sides add style to that function. The stippling is quite rough, but with it's wrap-around application, the overall impression is of a purposeful, precision rifle, equally at home on the range as in the field.

The comprehensive spec of the HW98 stock continues with an adjustable butt pad and cheek-piece, both easily set with an Allen key – just slacken off and adjust to the desired point. The rubber butt pad is of the type where it sits on an aluminium plate and locates onto a matching plate on the rifle. This can then be adjusted and then tightened up to any level required.

On the range, the different firing cycle characteristics come to the fore. The HW98 has an air of precision, making all the right clicking noises as the action engages. Cocking effort is very reasonable, whilst the shot is smooth and crisp – with a tuned feel to the action. That bull barrel, as well as looking fantastic, means the balance is in the right place, making the HW98 slightly muzzle heavy, which is perfect in my book…

The HW90, on the other hand, has the unique feel of the gas-ram. Cocking is best completed in one confident motion. Although significant effort is required it's more about technique than anything. In fact it reminds me of a compound bow – hesitate and you pay the price.

As supplied, and using Daystate FT pellets, the HW90 registered a fair variation of 15fps but was a little low in the power stakes, returning 10ft/lbs over the chrono. A power adjuster is featured, that sits at the back of the cylinder, so with a Slim-Jim hand pump, available from Theoben Ltd., the valve can be adjusted up or down as necessary. The HW98 posted text book figures, with a variation of 16fps and energy at 11.7ft/lbs.

On the range, the HW90 action displayed the smooth quick snap, so characteristic of the gas-ram system. An incredibly fast lock-time is another by-product, and all I can say is the accuracy was stunning. At 35yds, from the over-arm FT position, a five shot group measured a mere 5/16inch, with four of the shots in a clover leaf.

The HW98 felt less harsh to fire, but the groups were slightly larger – still a very creditable half inch at the same range.

If a quality break-barrel air rifle is top of your shopping list, then both these rifles should be on it. Final choice comes down to the individual, but I'm going to stick my neck out here and say that the HW98 is such an incredibly satisfying beautifully engineered, well appointed tool, that for me, it just shades it!