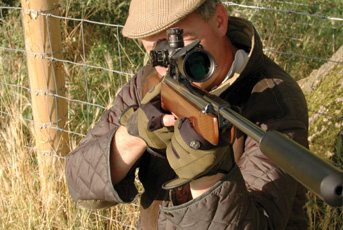 It was Theoben of course that devised the ground-breaking gas-ram design for powering air rifles 30 or so years ago, but even they could hardly have foreseen the runaway success of their brainchild.

Replacing the mainspring of a conventional spring-piston airgun, with a sealed chamber of gas, was an inspired move, and highly innovative at the time. When the rifle is cocked, the piston is drawn back which compresses the sealed chamber of gas. On firing the gas expands rapidly, pushing the piston forwards, which in turn, compresses the air in front of it, to propel the pellet in the normal way.

Weihrauch saw the potential of the gas-ram design early on, and so struck a deal with Theoben that saw the production of the HW90 rifle in Germany, incorporating gas ram technology. Originally Theoben used inert gas to fill the gas-ram (or strut as it is sometimes called) but they later changed the ‘gas’ to compressed air and this is what Weihrauch still use.

A German rifle with English technology at its heart was an interesting proposition, but the fact that the ’90 is still produced, largely unchanged from the original blueprint, is testament to the original concept, and the popularity of this most enduring rifle.

Of course, as patents and design protection expire, manufacturers across the board are free to incorporate their own take on the theme; hence the recent rush from many quarters, to release gas-ram powered versions of existing models. So why the rush? Well theory dictates that the gas-ram often produces a quicker lock time, where the pellet is off on its way to the target more quickly and cleanly than a comparable spring-powered design. In addition, the system should be far smoother to cock, and free from any spring resonance or ‘twang’ as the action fires.

I therefore thought it was about time then, to catch up with the HW90, to see just why it has held its place in Weihrauch’s distinguished product line-up all these years. Two options are available, with either a full length rifle with long barrel complete with open sights, or my test model here, the HW90K carbine, supplied with a short barrel and Weihrauch’s own much lauded ready fitted (screw cut) silencer but no open sights.

The matt finish of the moderator is not only smart, but highly practical if the rifle is to be taken out into a hunting environment; but it’s the hair curler style baffles/air diffusers, that have caused such a fuss on the airgun scene. The design is super efficient, and whilst more marked when fitted to a pre-charged pneumatic, the difference here is still highly noticeable. Performance apart though, once you consider the carbine’s 12” barrel, the silencer also adds all-important leverage to cock the break barrel action.

Admittedly, the HW90’s looks are a little on the conservative side, with a medium brown lacquered beech stock, and familiar Weihrauch metalwork. That said, the superior metal finish and rich chemical blueing always set these guns apart from the norm, with pride of ownership always a factor to be considered.

Trigger wise, Weihrauch had to install a new unit when they introduced this model, with the ‘Elite’ set up replacing the much heralded Rekord benchmark design. Any worries on this score though should be quickly dispelled, since the 90’s trigger performs as you would expect any Weihrauch trigger to. Reasonably light settings, and a super precise and consistent let-off are all you can ask on that score.

One big difference from Weihrauch’s spring powered rifle is the safety set-up. With other HW springers the safety sets automatically on cocking, and is indicated by a button popping out of the rear left hand side of the action cylinder. You push it in to put the rifle into firing mode and it is not resettable. However, with the HW90, the safety is still automatic but the indicator is fitted into the trigger guard. To cancel it you just push it in, as on other HW models, however the safety on the HW90 can be reset manually by squeezing a small grooved catch at the front of the trigger guard – handy!

Stock configuration is par for the course, and the slimmed down fore-end tip is a nice touch, which aids handling no end. Weihrauch opt for a chunky, hand filling grip with this model, and whilst the chequering isn’t maybe up to the sharp standard of vintage Weihrauch, it does the job asked of it. Given that no open sights are fitted to these rifles, fitting some appropriate glassware is a given. In that respect, a slightly higher cheek piece would be nice, although as standard, the stock is a reasonable compromise. Interestingly though, Weihrauch have refrained from moving to an ambidextrous design with this model, although in use, given the gentle cheek-piece definition, the ’90 could be shot mounted from either side.

With a scope onboard - easily achieved given Weihrauch’s extensive dovetails and arrestor stud fitting points - it was time to gauge performance.

Many break barrel airguns these days can be slightly awkward to open at the breech, but no such problem here. A perfectly set sprung détente and solid engineering, result in some crisp, satisfying clicks as the breech is opened, and what follows is a nice smooth cocking stroke, devoid of any graunch or twang (as sometimes associated with spring powered actions).  Cocking effort is still significant however, and the stroke (in keeping with most gas-ram designs) is best achieved and minimized when undertaken in one positive sweeping motion.

Chrono stats first, and with the ubiquitous JSB’s, Air Arms Diabolo in this case (one of the most popular pellets on merit, believe me), the HW90K posted text book variation of 14fps over ten shots, for energy a touch below 11ft/lbs.

Shooting from the over-arm FT position, the ’90 proved outstandingly accurate, if I did my part of course, and several groups c-t-c of just quarter inch, says it all. As for the feel of the action, there is still recoil, but no twang or resonance- more a quick, slick movement. For the record, I did find it quite sensitive on change of position, and with some extensive testing undertaken, I found the rifle shot around an inch high from both the kneeling and standing position, having been zeroed from the over-arm stance. Inch groups at 25yds kneeling were good, but some incredible results were achieved when standing. Maybe here, the ultra fast lock time showed through, and several tight groupings certainly made a point. But would I favour this model over spring power? That’s the key question.

Weihrauch’s line-up of top quality break barrel models is one of the most extensive out there, so there literally is something for everyone. Personal taste plays a big part in final choice, and there’s no doubt that the HW90K is an extremely well made, hard hitting,  highly accurate rifle, and a fine example of the gas-ram specification. It’s also a full on heavy weight break barrel, which may be a selling point for many, who are in the market for a beefy adult sporter. To be honest though, I would opt for the HW95, which whilst spring powered, is significantly lighter and cheaper; with no sacrifice in quality or performance. You pays your money - you takes your choice, as they say.

One things for sure though - Weihrauch’s legendary quality is assured whichever route is taken. GM