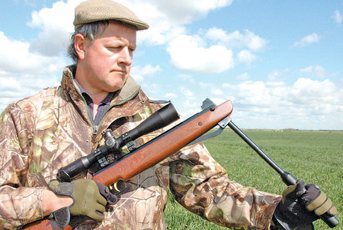 With the classic old break barrel airgun design as popular as ever, I obviously get to review a multitude of models from a wide spectrum of manufacturers; and quality varies enormously. I have to say though, that it’s always a pleasure to reacquaint myself with the Weihrauch brand, and my test rifle here, the very latest version of their HW95, is a fine example of the art.

It’s some years since I tested one of these slick little rifles, so I was keen to see how the 2012 offering compared with those I’ve previously shot.

The HW95K is the company’s full powered, yet light weight model, and the specification works a treat. Full power spring guns can deliver the goods, yet you often pay the price with the sheer heft of the damn thing, given their reliance on comparatively heavy spring/piston internals to generate the power. If the rifle is to be carried into the field for a full days sport, then this factor alone can be significant. Indeed models such as Weihrauch’s own HW80, can be a real handful, and don’t lend themselves to lengthy hunting trips.

The ’95 however will appeal to many who require the power output and precision of a full-on sporter, yet in an easy-to-handle package. Many, including myself, still sadly miss the Feinwerkbau Sport, which managed to be ultra compact, and super accurate, whilst still packing a punch. This much loved classic managed to price itself out the market at the time, yet with the HW95K, Weihrauch have managed to fill the void admirably. Also, considering the asking price of the HW95K at sub £350, I reckon it takes some beating for a production break barrel air rifle.

Quality timber is always part of the deal from this manufacturer, and this ’95 is no exception. However, that said, the chequering, whilst perfectly executed, just seemed a little bland when compared to Weihrauchs of old. Couple that with the move to a totally ambidextrous stock, with no definition to the cheek piece, and maybe this is where some cost cutting has been made. One change for the better though is that ultra slimmed down fore-end tip; and this just looks and feels right.

Where the action is concerned, the overall finish is excellent. Deep, rich chemical blueing covers all the metalwork - bar the silencer – and quite superb it is too. The barrel - barely 13inches long - is threaded to take Weihrauch’s own silencer, and with this highly effective moderator fairly widely regarded as the benchmark by which others can be judged, it’s a quality add-on. Its addition here is as much for practicality as functionality though, since silencers rarely have a dramatic effect on spring powered models, due to the nature of air delivery inherent in the design. Silencers on pneumatics of course can tame a significant crack down to a whimper; with rapidly expanding air making some PCPs very noisy indeed. Yet the majority of springers don’t produce anything like the muzzle crack of a PCP, and in the case of this HW95K, the silencer is more importantly a cocking aid for that super short barrel.

That said, tests carried out both with and without the moderator in place, did illustrate that it was indeed suppressing much of the internal mechanical twang incidentally! Reason enough for its inclusion.

Why Weihrauch still persist with permanently stamping safety instructions into the rear of an otherwise attractive rifle’s cylinder, I don’t know - but persist they do! Fitting a scope to the HW95K is a simple affair, given the standard Weihrauch inclusions, of a significantly long dovetail rail back to the rear of the block, and three arrestor stud holes drilled into the receiver. Given the length of the compression cylinder, there’s plenty of room to manoeuvre and position glassware too, so your options are open with this rifle.

I chose an MTC Viper scope to top off the combination, and the two seemed to sit well together. Moving to the range, I was intrigued to see just how this latest model would feel, and whether it would maintain the company’s tradition for no-nonsense quality spring power.

I chose an MTC Viper scope to top off the combination, and the two seemed to sit well together. Moving to the range, I was intrigued to see just how this latest model would feel, and whether it would maintain the company’s tradition for no-nonsense quality spring power.

type of airgun is concerned. The barrel/breech lockup is quite simply superbly designed and engineered, and whilst it feels totally solid and secure, the barrel can still be broken initially, fairly easily, which isn’t always the case these days. Cocking effort is also quite easy, due to the nicely balanced mechanism and significant leverage from the silencer. Chambering a pellet into the breech, with compatible ammo (in this case, the ubiquitous Air Arms/JSB’s) is also a pleasant task, given a subtly recessed lead-in at the breech lip.

Accuracy tests over 30yds confirmed that Weihrauch’s own barrels are still up to the job, with 3/8inch groups easily achievable, using a variety of pellets. Accuracy was relatively easy to come by too, shot from the over-arm FT stance, and the mild nature of the recoil is such that it’s easy to see just why this brand of springer has been the mainstay of custom tuning houses such as V-Mach for so long. Indeed the quality of the action is such that a fully tuned model would be a further investment in the right direction. Given the fairly standard stock configuration, this rifle still handles pretty well. The combination of that sleek fore-end, nicely shaped grip, and world renowned Rekord trigger (still one of the very best fully adjustable sporting trigger units) come together where it matters.

Quite simply, when all the features and sheer performance are taken into consideration, the HW95K is in my opinion, the very best light weight, full powered break barrel airgun available today - suitable for hunting or Hunter Field Target shooting.

In today’s market, a plethora of cheaper alternatives exist; yet for engineering pedigree, reliability, and top class accuracy, Weihrauch’s HW95K is the real McCoy.