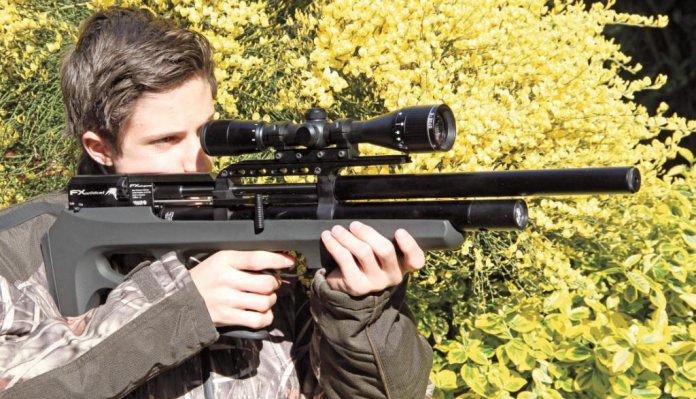 The FX Wildcat is another genius design from the Swedish firm of FX, with its chief designer Fredrik Axellson at the helm. There has been a definite trend towards ‘shorter is better’ these days, especially where precharged air rifles are concerned. Bullpups were really the curious air rifles made by custom firms, such as Venom or B&M back in the day. Now, they are everywhere, my kids like them, so it’s probably inspired a new era of shooters, that’s the way things turn full circle some times.

In fact, FX were one of the new wave innovators in this area and their Bullpup designs now being perfected. A Bullpup is an ultra short version of an air rifle, where the barrelled action is bedded back into the stock; so, instead of a rifle of 42-inches long, you have one of 29-inches. This makes for a compact, light-weight, well balanced and fast handling rifle. I personally really like them and used to own a few, including a .22 rimfire that B&M modded from a BSA Century rimfire.

The FX Wildcat is beautifully balanced, practically made for hunting, as it is for a spot of plinking or informal target shooting. You have a lever operated mechanism with a detachable rotary magazine and a price of £1100 gets a lot for the money.

The barrel can be quite long on a Bullpup, so no need to compromise on length, as with a normal carbine barrelled springer. This really helps on a pre-charge to keep the pressure up and achieve good/efficient velocities. At 19.5-inches, you have the interesting rifling system that FX use, which is SmoothTwist, which is similar to polygonal twist rifling in some of my subsonics.

You also have a barrel shroud that fully covers the barrel that can be un-screwed if necessary via a knurled nut at the muzzle. The blackened alloy shroud goes back to the front scope bridge and there after the barrel is plain to the action and it has a nice blued finish.

The action is regulated as you would expect and takes the form of a lever action operated design. This lever is situated above the pistol grip of the stock, so it is easily accessed by the firing hand. It cantilevers out with a loading rod that protrudes back to cycle the magazine and cock the action. This lever is bottom heavy i.e. more of it below the connection and the slim circular rod that forms the lever is grooved to aid in grip. I personally could do with a larger, fuller grip. Regardless, it is a very fast and positive action but to ensure a single shot pellet removal from the magazine, it is best to form a style of deliberate lever action and then a 100% operation is guaranteed.

The action is a large aluminium block and this has a black, hard finish that is better than previous models. You have a long synthetic section to rest your cheek on, being a bullpup design. The eight-shot magazine is easily removed by retracting the cocking lever and popping out the mag to the right-hand side. It is fast to remove and load by simply inserting a pellet into the pellet well section and is deep enough to accommodate most length pellets. The central ball bearing detent locates and holds the magazine securely.

The air reservoir is fixed and slender beneath the action, with an air pressure dial visible at the front end to a max read out of 250bar. Behind this, is the quick fill air inlet hole that is covered by a rotating sleeve to keep the grime out of every day shooting or hunting. The air reservoir has the same finish as the barrel shroud, so far better at resisting those day to day knocks any rifle gets.

The trigger is a single stage unit but is adjustable and has a Match feel to it, as the curved separate trigger blade gives a very good feel to the trigger release. Here on test at 2.55lbs weight with no creep or backlash, so giving a good confidence in achieving maximum accuracy.

The safety is pretty simple, with a small lever at the bottom rear/right of the action. The forward position is in FIRE mode and rearward is SAFE and blocks the trigger. Simple but effective.

As with all Bullpup designs, due to the rearward nature of the action and usual scope mounting area, you need some form of bridge at the mid section of the rifle. Here, the FX has a good twin support bridge that straddles the air reservoir that has a long dovetail scope mounting section for even the biggest scope and has nice ventilated cut through to add a bit of interest and saves some weight. You have a high scope mounting system, as with any Bullpup design, but I like this and it feels very natural on the Wildcat.

Most Bullpup stocks take the same format as their layout dictates a pistol grip section that is either stand alone or connected to the rear section of the stock and thus forming a thumbhole design. The FX Wildcat has the latter, which I like and the Wildcat has a particularly nice thumbhole design.

Made from a hard copolymer composite material, it feels solid yet light and has a nice moulded in grey/ black finish to it. The forend is relatively short, to allow access to the air reservoir fill inlet but has generous proportions and feels very good in the palm. The pistol grip too is good, with a quite straight up gait to it and possessing three finger grooves for added stability and a bottom lip moulded in to support the base of the palm. Behind this, you have a thin strap that connects to the butt, with the central sections cut out to form two hollowed sections. The rear butt section has a good-sized hand hook, to give addition support if you need it and the recoil pad is a non-adjustable thick rubber unit.

Filling the air reservoir is a breeze and 230bar gives you 150 plus shots in .177 calibre on test, or 200-250 in .22 cal. Being regulated, you have a good velocity straight off, with little variation between the shots fired and I had less than 15fps variation between velocities from the JSB pellets.

The cocking lever is reliable to use, if you adopt the deliberate hands-on approach. The mag was really easy to load and remove, a big bonus when out rabbiting at night. Ergonomically, the Wildcat sits very comfortably in the hand and the cheek rests well on the action, so you that can reload without breaking your hold. The muzzle report too is very quiet from the shrouded barrel and often the pellet strike is the loudest part of the firing cycle.

I tried a variety of pellets at 30-yards over the chronograph with no problems, except a couple of dual loadings and blocked cocking due to me not locating the mag properly.

This FX Wildcat shot nearly all the pellets well from the smooth twist rifling and if I had to choose a pellet it would be either the JSB Exact or JSB Targets that both shot 0.35- inch groups. All shots were very consistent, incredibly quiet and it became a bit addictive reloading mags to topple spinners at range. I still like my springers, but as PCPs go, this is a very good performing rifle and I love the Bullpup design that works perfectly with this Wildcat layout, good value too.