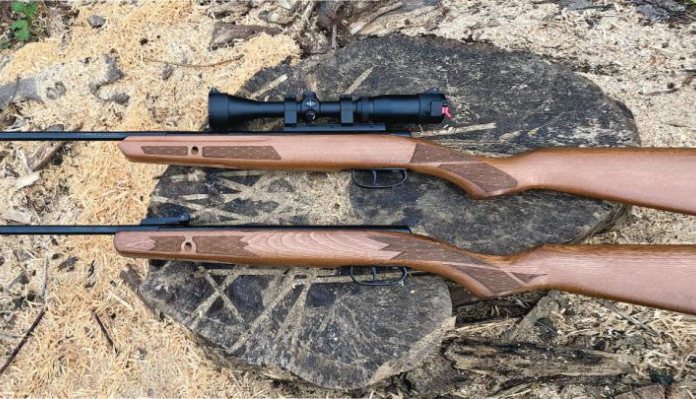 There are so many different types of air rifle available these days and it’s a far cry from when I first started shooting! Back in the 1970s you only really had one option, the tried and tested spring piston airgun. Of course, you could choose between break barrel, underlever or sidelever actions, but the internals were pretty much identical from one company to another! The gas ram power plant hadn’t been invented yet and CO2 air rifles (and pistols) were still ‘on ticket’ i.e. you needed an FAC to own one and why would you when they simply weren’t very good or were good but very expensive! Pump up pneumatics were around in those days and examples from Sheridan, Benjamin, Setra and Sharps all had their fans. Pre-charged pneumatics (PCPs) were in their infancy and were highly exotic; I for one had never even heard of them, let alone seen one!

These days, all the above are readily available from our local gunshop but guess what, people still love the rugged simplicity of the good old springer, especially as they do not rely on any outside power source and the break barrel is still king. There are innumerable companies making spring piston airguns, so the choice can sometimes become rather overwhelming. Well, there is now another company throwing their hat into the ring, as the US major player, Winchester, now have two break barrel rifles available.

I first handled them at this year’s British Shooting Show at the NEC and I reviewed their excellent ‘4.5 Special’ CO2- powered revolver last month and what a peach it is. The Winchester 45 and 45-RS are quite similar in appearance and share many common parts but they each have their own identity. They are made under licence by Gamo in Spain, hence them being ion the BSA/ Gamo stand. I’ll start with the more affordable Model 45.

This is going to appeal to a lot of shooters, as it’s such a familiar layout but has some really useful features. The relatively slim compression cylinder is around 12-inches long and is pleasing well-polished and blued; it’s really nice to see that the steel cylinder has been prepared so well before the finishing treatment occurs, as some companies seem to scrimp on this stage and the results show through the blueing. The 17-inch barrel has also been well finished and it has a ½-inch UNF thread at the muzzle, complete with screw-on protector; you can obviously add a moderator but the end result would be quite long. The barrel, as you would expect, is rifled and the bore looked crisp and shiny. The barrel is retained by the traditional sprung detent. If you flip the 45 over, you will see the articulated cocking lever that joins the barrel to the piston; being articulated (i.e., hinged in the middle) it means that the cut-out in the underside of the stock is kept relatively short, compared to if a one-piece bar were fitted.

The foresight consists of a polymer ramp with blade on top, with a red fibre optic rod housed within it; this simple feature looks like it’s illuminated but in reality it’s just the ambient light being concentrated at the end. There is a fully adjustable rear sight, complete with yellow inserts, mounted above the breech and the elevation can be altered via thumbwheel and windage by a small knob on the right side; should you run out of elevation, the plate that carries the U-notch can be raised further by first loosening two small screws on the rear of the unit and then tightening them again when the notch has been raised; for most applications, I doubt this will be necessary however.

If you want to use some sort of optical sight, such as a scope or red dot, it’s simply a matter of attaching one to the rails machined into the top of the cylinder; there’s plenty of room to get the eye-relief correct too, as the grooves are 7½-inches long, complete with a hole for a scope mount stud to prevent scope creep.

The trigger unit is two-stage and adjustable if required. An anti bear trap mechanism is fitted, which prevents the rifle from firing during cocking and a manual, re-settable safety catch is mounted on the right of the cylinder, back for SAFE, forward for FIRE.

The dark-stained beech woodwork fitted to the 45 is completely ambidextrous with a raked grip and slender forend, with a cut-out on the right of the tip to make way for the rearsight adjuster – I did wonder what it was for when I first saw the rifle but it soon dawned on me, doh!

There are laser-cut panels of chequering on the hand-filling grip and forend sides to enhance grip and there is a ribbed, rubber butt pad fitted; length of pull is 14½-inches. The stock is attached to the metalwork using Allen bolts and everything is nice and secure with no creaks or groans during cocking. Overall, the Winchester 45 is a classy affair and good value at £229.

Next up, is what you could call the ’45 deluxe’ but is in fact called the 45-RS, ‘R’ for rail and ‘S’ for silencer. The RS, at £269, shares the same action as the standard 45 but with the added extras above. The top of the action has a rail fitted, which raises the sightline and no open sights are fitted; the silencer is fitted to the shortened, 12¾-inch barrel; the silencer is removable (for barrel cleaning, for instance) as it is fixed via a ½-inch UNF thread. The rifle is obviously much shorter with the silencer removed but produces a bit of a crack without it – far better to use it with in place, that’s the whole point after all!

The woodwork fitted is similar to the 45’s but the forend tapers more towards the angled, not rounded, tip and there are stylish flutes running along the top, almost back as far as the scope rail. The chequered panels differ from the 45 but once again, it’s a pleasant ‘handle’.

Off to the range

Seeing as I had one rifle set up for open sights and one for an optic, it seemed logical to use them in that way and I fitted an MTC 3-9 X 40 to the rail on the 45-RS. Both rifles were .177 by the way and I was using H&N Baracuda FT pellets. You obviously have to be careful when mounting a scope on a break barrel; fit a long scope and you run the risk of not being able to actually cock the rifle! I’ve seen someone do it before and you should have seen the look on his face when he realised what he’d done and we ribbed him about it for ages! No such problem with the MTC however and I had soon had the eye relief spot on and the reticle vertical.

I set up some paper targets in a convenient spot at the farm and set about zeroing both rifles; I thought that I might as well set the 45 for 15-yards, as it would be a perfect point of impact for setting up near the compost heap, to see if I could take care of the rats that I’d seen there recently. Rats do a great deal of damage and spread disease, so it’s always good to be able to help reduce their numbers. I set the 45-RS up with a 25- yard zero, as this would cover anything further out. Both rifles were a bit ‘twangy’ to begin with, but they were straight out of the box but is was pleasing to see that there was no dieseling, so there wasn’t any excess oil used in production. The trigger wasn’t exactly a match unit but it was safe and predictable; I found that I got the best accuracy if I didn’t hang about too much and simply ‘pulled’ when on aim.

Accuracy was very good with both rifles and the firing cycle smooth and crisp. The General Licence recently been withdrawn by Natural England, so I wasn’t able to tackle the magpies and parakeets that landed in the trees behind me, which was very frustrating! They are both a huge problem on the farm and I couldn’t cull the feral pigeons in the barns either and having them in there is a real heath risk. I did spend many hours target shooting though and I really enjoyed shooting these little Winchesters on numerous occasions. Power was around 11 ft.lbs, so more than adequate for targets or vermin. Fit and finish is good and the accuracy very pleasing with several brands and it clearly liked the H&Ns. The RS model is more expensive than the standard 45 but is well worth the extra and is slightly lighter too. These air rifles may not have an underlever like their name-sakes but they’re definitely worthy of the Winchester name!