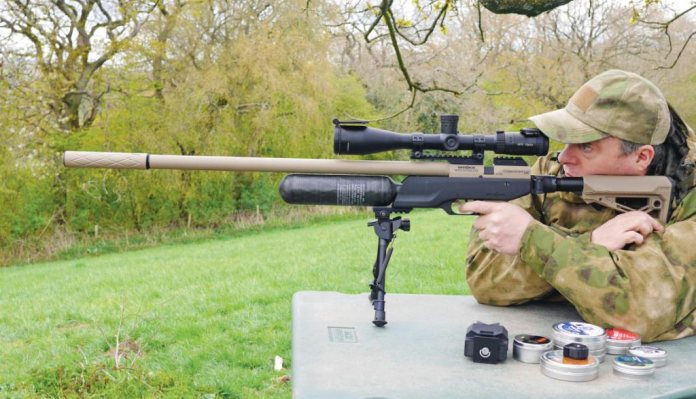 It’s been a long time since I last had a Brocock on test, and in that time they’ve certainly come a long way. I think it’s safe to say that being stabled under the same roof as Daystate has transformed what the brand means and what it has to offer. The gun on test is another in my series of FAC heavy-hitters. It is the Magnum version of the Brocock Commander, in .25 calibre. You might think that with a maximum muzzle energy of 50+ ft/ lbs and an uncompromisingly military appearance, the Magnum Commander would be a bit of a thug, but as we will see, it has surprisingly good manners.

Eye of the beholder

If you don’t like military-looking rifles, one glance at the Commander’s folding AR15 butt-stock, AK-style pistol grip, ventilated muzzle device and chunky Picatinny rails will probably be enough to have you reaching for your chequered-walnut worrybeads. And if not, then the desert-tan Cerakote finish on the 23” barrel and 0dB sound moderator should do the trick! A friend had the brass neck to quip that the Commander had surely fallen out of the ugly tree. This was a bit rich, coming from someone who owns a Hatsan MP-A24 12-gauge, but I could see his point. Funnily enough, after a couple of hours shooting the Commander, we were both won over.

Also unexpected was the handiness of the rifle. First impressions are of a hulking behemoth, but the polymer butt, grip and chassis are all as light as they are tough. The action is aluminium alloy, the bottle is carbonfibre, and that ‘bull barrel’ is mostly air space, so the actual experience of holding, hefting and shouldering the Commander is remarkably civilised.

Being generic AR/AK items, the stock and grip of the Commander are easily swapped out for others if you prefer, but in sourcing these components from Israeli tactical accessory specialists Fab Defense, Brocock have already chosen well. The AK-type grip is positively tactile, fills the hand nicely, and has a trap-door floor plate that creates a storage space you can use for extra ammo, batteries and such-like. For its part, the telescopic AR15-type butt stock features a rugged rubber recoil pad and rides on a 6-position AR-type buffer tube, where it gives a length of pull (LOP) of between 14 1/8” and 17 1/4”. The stock can also be folded against the left-hand side of the chassis to give a gun-bag-friendly overall (unmoderated) length of just 30.75”.

The FD butt sits snugly over the buffer tube, and a positive press of the hinge is required to deploy the stock, but I didn’t like the degree of play in the joint. Five minutes with a roll of electrical tape eliminated most of the movement without compromising the lock-up, but clearly, some redesign is needed in this area.

The stock and grip mount to a polymer chassis that sports a nonslip, matte texture and a hinged trigger-guard with a détente in the front pin to aid access to the visible trigger adjustment screws (first-stage, trigger-position and safety-torque). Nevertheless, the rifle’s semi-bullpup form factor requires you to remove the action from the chassis to adjust the second stage. This is as simple as removing the pistol grip bolt and sliding the chassis away from the action. Clever internal geometry ensures this discreet attachment system delivers a rock-solid fit when you retighten the bolt.

When it comes to finding your way around the rifle, reviews and forums are mostly more use than the manual. In trying to cover multiple Compatto variants, it omits important details about the Commander Magnum, such as how to remove the stock, adjust the regulator, and tune the hammer pre-load. I also had to double-check the stated 250bar fill pressure, since Brocock fit the Magnum with gauges designed for the 200-bar standard model, so anything above this takes you into the red zone. Not dangerous in this case, just disconcerting!

The truth is, almost nothing needed adjusting. The trigger position, first stage and safety-lever tension were all tickety-boo out of the box; a halfturn clockwise took the second stage down to a nice crisp 2 lb break; the regulator - which tops out at 200 bar - was already on a sprightly 160, and the hammer spring was clearly happy with that. So it was all good news from the get-go in the muzzle velocity (MV) and standard deviation (SD) departments, as the chrono numbers show. I topped up every 50 shots to keep on the right side of the regulator, but with easier-to-read gauges, I reckon that could be extended.

Shooting the Commander Magnum was a real pleasure. The operation of the XR cocking lever was light, fast and smooth; the probe took pellet after pellet from magazine to barrel without a hitch (and with no sign of opening up groups compared to the supplied single-shot tray), and the firing cycle was impressively understated.

The rifle’s report was agreeably modest too. Initially, I credited this to its smart fluted, vented and colour-coordinated moderator, but the difference with and without the moderator was as nothing to the effect of removing the shroud, which unmasked the rifle’s true power and had me reaching for my ear defenders. The moderator functions, but that shroud is doing some serious work! Making the Commander truly stealthy required a bit more internal volume, though, so I fitted my DonnyFL Shogun. The sudden drop in decibels had me checking the power adjuster, but the chrono readout and heavy smack of fast lead on downrange steel confirmed that the rifle had lost none of its authority.

The icon alongside the power adjuster suggests a continuous gradient, but in reality, there are 4 pre-set click-stop positions. Velocity drops incrementally as you reduce the power, stepping down by 34, then 76, then 129 FPS from maximum with 20-grain H&N Field and Target Trophy pellets. With 25.39-grain JSB Kings the maximum and minimum numbers were 905 FPS (46.19 ft/lbs) and 690 FPS (26.85 ft/ lbs). 27 ft/lbs isn’t exactly farmyardfriendly, and reducing the power doesn’t extend the shot capacity because the adjuster works by changing the size of the transfer port rather than the valve dynamics. So, the principal benefit is to bring light pellets, like the aforementioned H&N F&TTs, down from a wildly unstable 995 FPS to speeds where they would group well. Which in this instance meant Power level 4, 756 FPS and 25.46 ft/lbs.

Consistency was good - and at times superb - with all the projectiles tested. Best were the JSB Kings and Air Arms Diabolo Fields, the latter being a cheaper, but by no means inferior, version of the former, which showed a super-tight spread of just 5 FPS at just over 900 FPS, but no strings had an ES over 27 FPS. Not bad for ammo straight from the tin, and the Huma regulator means you get constant power across the whole fill.

Like a lot of advanced manufacturing these days, the Brocock Commander is a highly international creation, with a barrel from Germany (Lother Walther), furniture from Israel (Fab Defense), a carbon-fibre bottle from Korea (Inocom), a regulator from the Netherlands (Huma Air), and receiver components from Italy (Marocchi). But at the heart of it all is Daystate’s tried-and-tested Slingshot valve technology and the skilled team of Staffordshire-based designers and craftsmen who bring everything together to produce rifles that are chosen by shooters around the world.

I really enjoyed testing the sweetshooting but hard-hitting Commander, but reckon it deserves a bit more attention to detail. Tightening up that stock hinge, fitting more appropriate gauges (and fitting them upright), supplying a manual that does justice to the adjustability of this model, and possibly including the cheek-piece for the GL-core stock as standard would all be positive steps. As would the option of a higher-performance moderator. A bottle you could simply unscrew to de-gas the gun would be nice too. Nevertheless, these are all upgrades the experienced user can implement if they love the rifle enough, and as it turns out, loving it is as easy as shooting it.