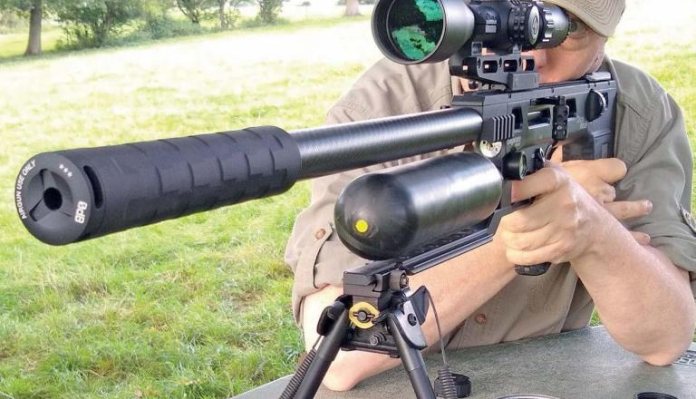 There are three important things to know about Daystate’s Delta Wolf PCP: it is astonishingly expensive; it is utterly unique; it is devastatingly effective. Let’s get the price out of the way first.

The rifle costs £2700. That’s on a par with a reasonable thermal riflescope, an upperend tactical day scope or even that family holiday you cancelled last year. Does it seem more affordable now? Perhaps a bit.

Now for uniqueness. Only Daystate make airguns with electronic triggers, hammers, shot counters, audio alerts and status screens. But they’ve been doing this for a good while; so what’s so radical about the Delta Wolf? The crucial, ground-breaking difference is that this gun is able to monitor its own output via a chronograph built discreetly into the barrel shroud. This means it can feed real-world data back into its onboard computer, which checks this against pre-programmed kinetic models and tweaks the hammer’s striking force and the dwell time accordingly, delivering the precise velocity the user has selected for their chosen projectile.

Adjusting velocity isn’t only about flattening trajectories, increasing impact energies, or even saving air: it’s also about precision. Every projectile has a particular velocity range within which it is optimally stabilised, and every barrel will produce its best groups when the velocity of the projectile is in tune with its harmonics. All this is largely irrelevant to off-ticket 12 ft/lbs rifles, where the power cap massively restricts the range of velocities, calibres and projectiles available. It’s a different story for FAC-rated models, however, especially those – such as the Delta Wolf - designed to be readily convertible to different calibres and capable of producing over five times as much muzzle energy.

Fellow reviewer Mark Camoccio recently did a comprehensive review of this rifle in sub-12 ft/lbs configuration, so I’m going to focus here on what it has to offer the FAC-equipped shooter.

Do as I command

The benchmark for the level of adjustability afforded by the Delta Wolf is undoubtedly FX’s Impact series, and it’s evident from the rifle’s layout that Daystate had the Impact squarely in its sights during the design process. Not to copy it, but to make the Delta Wolf strong where the Impact is weak. Most notably, an Impact requires constant trial-and-error to find the perfect tune for a given barrel and projectile combination, whereas the Delta Wolf makes each adjustment as simple as selecting the up or down arrow on an LCD screen.

Instruct the rifle to shoot 25.39-grain .22 pellets from a 23” barrel at 990 FPS, and within 3-4 shots that’s what it does, plus it will keep hitting that number within a couple of FPS until you tell it otherwise. Fancy seeing if tweaking the velocity by 5, 10, 15 etc. FPS will give tighter groups? Simply activate programming mode, swipe right to access the ‘speed change’ screen, and blip the arrow for as many 5 FPS increments as you want.

Amazingly, the Delta Wolf’s memory is preloaded with complete power maps for the full range of Daystate/JSB pellets in .177, .22, .25 and even .30. So no complex ground-up re-tuning is required after a calibre change, just jump into programming mode, enter the relevant parameters, and get shooting, tweaking the settings on the fly if necessary.

The factory presets aren’t the whole story, however. There’s also an advanced programming mode that lets you create ‘custom sets’ for additional projectile types, such as slugs. Two parameters are available: voltage (V) and dwell-time (ms). Respectively, they equate to adjusting the hammer spring preload on a mechanical gun and controlling how long the hammer is in contact with the valve stem (done on an Impact via the valve-travel knob). Each set can be individually named and saved for future use, and deleted when no longer required.

Though full of potential, this aspect of the Delta Wolf’s control system is currently difficult to exploit since the manual provides no guidance about representative settings for either parameter or how their interaction influences performance. Daystate clearly hopes that users will experiment, find good solutions, and share these on social media; but at the time of writing Google basically shrugs its shoulders when you search for ‘Delta Wolf slug tuning data’, suggesting that not enough rifles are yet in the hands of shooters with the necessary time, interest or online engagement to identify and share such solutions. Expecting shooters to undertake extensive testing with some of the most expensive airgun ammunition available could be part of the problem, too. It would be nice to see Daystate give Delta Wolf owners a helping hand! Even displaying the V/ms settings for the factory presets would be a start.

Personally, I shot through over £50-worth of slugs for this test and only found a decent tune with 22-grain FX Hybrids (75V/3400ms giving 990 FPS and accuracy of 3cm for 5 shots with a 0.9 drop @ 100m). On the way, I discovered that trying to tune for slugs by picking the factory pre-set for the pellet closest in weight and tweaking velocity for better accuracy didn’t work. In truth, muddling along expensively in advanced mode quickly becomes much less appealing than switching back to the factory settings and instantly blasting the middle out of your target. After all, if you wanted to spend all afternoon tuning your airgun, you’d have bought an Impact! On that point, it’s interesting that a major USP of the M3 Impact is adjustments that are more repeatable and shareable, and that the FX-owning community appears already to be taking advantage of this.

I’m going to move away from the programming side here – all the operational details are well presented in the manual - and on to the physical features of the rifle.

Let us see those features

It obviously has a bullpup layout, with the breech and magazine located at the top of the club-foot butt-stock, and the pistol grip and biathlon-type cocking lever located amidships, behind a generous 480cc carbon-fibre air bottle that feeds an externally-adjustable Huma Air regulator via a capacious 34cc plenum. This format permits the use of a long 23” barrel (+7.5” 0dB moderator) within a 40” overall length and puts most of the weight of the 5kg combo close to the shooter, keeping the rifle agile as well as steady.

Ample ergonomic optimisation is provided by an adjustable trigger post and shoe, a height-adjustable butt-plate, and a top-cover with a full-length dovetail rail that lets you position both the cheek-piece and the Picatinny-format intermount exactly where you want them, or to do as I did and remove the intermount entirely to get the perfect sight height. As a southpaw, I also love the fact that the cocking-lever, safety, cheek-piece and magazine can all be quickly set up for left-hand use, with no need for extra parts or permanent modifications.

The final touch would be a function to let users invert the screen readout 180º for easy viewing with a left-hand hold. As it is, the rifle lets you adjust the backlighting and even select a red-lit ‘night-mode’ if you prefer.

The test rifle came pre-fitted with upgrades from Precision Rifle Systems that included a Gen4 adjustable butt plate and an extended Arca/Picatinny bipod/tripod rail. The quality of both was excellent and I found the rail a real asset. I side-lined the PRS butt-plate because it didn’t suit my shooting style and seemed unlikely to withstand the rigours of field use, but if benchrest is your thing, look no further, and note that the Delta Wolf also has a Picatinny rail for a rear monopod moulded into the underside of the butt-stock. Field use also called for a sling. Daystate will soon be offering a kit but rigging one up using a couple of QD Picatinny adapters was easy.

With pellet velocities optimised, hunting felt like cheating. The rifle has oodles of controllable power and at 970 FPS an 18.13-grain Rangemaster Sovereign Hunter was dropping just 1.2 MRADs at 75m and tumbling crows out of the sitty trees with devastating predictability. Meanwhile, the 0dB moderator did an amazing job of muting the unmoderated rifle’s shotgun-like report to a gentle cough, and the electronic trigger broke with exemplary crispness and consistency. Even set to maximum, pull weight is a delicate 225-grams (8oz), however, so if you didn’t sell off all your other guns to pay for your Delta Wolf, you’ll need to acclimatise when switching from something with a more typical hunting weight.

Final thoughts? The adjustability and tune-ability of the Delta Wolf are uniquely superb, but until Daystate or Delta-Wolf shooters can generate a library of custom sets for slug use, it will remain simply the ultimate ‘pellet gun’, unable to realise the immense potential of its inherent power and accuracy to the full. That said, while I had the Delta Wolf on test, my Impact didn’t come out of the cabinet, which might tell you something.