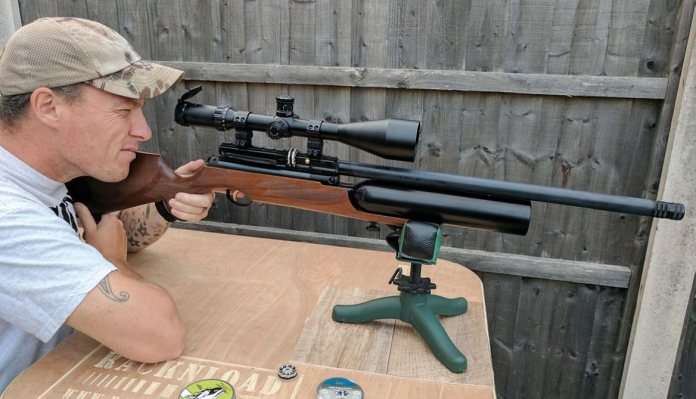 Hatsan really do come out with some very interesting guns, I’ve always said it, and the Nova is certainly no exception! Especially this one that is in .25-calibre and running at a huge 46ft/ lbs! As If the .25-calibre wasn’t pokey enough, even in a sub 12ft/lb air rifle, although it throws a rainbow-like trajectory due to the power to weight ratio; however, in a hi power (FAC-rated) rifle, it certainly comes into its own. Now, for the record, I was using H&N Field Target Trophy 19.91-grain and out of this rifle they are like anvils going down range! Serious hitting power! My test range was 50-yards and I was getting around 1.5-inch groups most of the time, sometimes sub-1-inch. So, accuracy is not that bad, considering that it’s a .25 heavy hitter. And what I think is great is the immense shot count from that 500cc buddy bottle at full power, a huge 88 in fact!

Up close to the monster!

Let’s take a closer look at this monster then? Now, it’s not the smallest of rifles and certainly not the lightest, weighing in at 9.7lbs! Total length is 49-inches, with a barrel length of 23-inches. The Turkish walnut stock is ambidextrous and has some nice chequering on the pistol grip and the forend. The cheekpiece is comfortable and a nice height for good scope acquisition. I particularly like the pistol grip and the way Hatsan have taken a round hole out of the stock at the rear where it meets the meat of the butt. It looks somewhat different but I like it!

As for the forend, it’s plentiful and like I mentioned, has good grippy chequering on either side. But me being me, I always like to look for weak points on wooden stocks, especially buddy bottle types. I did notice a slight difference in the thickness of the wood either side of where the bottle is attached to the action, but with it being a hard wood, I don’t think there would be any real weakness issues! While I mention the forend, there’s a handy couple of inches of polymer Picatinny rail underneath for throwing on a bipod. The butt pad is rubberised and is adjustable via an Allen screw. An added bonus with the stock is that it comes ready fitted with sling swivels, so no need to have to get the drill out when you get it home!

I have to mention that it is full left-hand friendly too (just to annoy the editor!). Moving on to the action, the Nova is basically an AT44 with a buddy bottle and a better stock. The same loading system is utilised and it works well. It’s a side-lever cocking affair with user-friendly rotary magazines. Very easy to use and load simply by pushing and seating the pellets in place. No awkward cassette-style system to try and figure out! They are made from aluminium and have rubber O-rings to hold the pellets in place.

The .25 mags can hold nine pellets, whereas the .177 and .22s take 10. To load, open the action and leave it rearwards. By the way, the side-lever is smooth to operate with no wobble! Forward of the magazine well, there’s a spring-loaded bolt (mag catch). Push this forward and lock it in place. Insert the magazine in to the well and then release the catch and the bolt will lock the mag in place. It’s then just a case of closing the action and that’s it, well, apart from the automatic safety catch.

I’m not really a fan of auto safety catches, as for each shot you have to stop and release it, which seems at odds with a multi-shot PCP like this. But this one can be quickly and easily released and its operation is fairly quiet. It is located at the top of the pistol grip and is in easy reach of your thumb. When it is disengaged, there are nice big red markers either side that clearly shows you that the rifle is hot.

Moving forward to the scope rail, the Nova has a dual dovetail, with a narrower 11mm integral with a lower Weaver-type width. If there is one thing that I do like when it comes to features, it’s versatility. And with one of these rails, you don’t need to worry about what mounts your scope is wearing as can be appreciated, which can be seen from the pictures. As it happens, I scoped up with the more traditional airgun 11mm.

The rest of the action is fairly chunky, I think it’s a Hatsan thing, but it looks good. Aircraft aluminium is used to keep things as light as possible and it needs to be kept light with this being a buddy bottled rifle. Pity it’s not one of those carbon fibre jobbies! But that said, I can put up with that bit of extra weight, knowing that I have 80 fullpower shots at my disposal! The filler port is located at the rear of the barrel and is very subtle, because at first it’s hard to find.

It has a plastic probe permanently in it to prevent dust getting in. The manometer is underneath the forend and is nice and clear, so you can easily keep an eye on roughly how many shots you have left. And like I said, those shots hit the mark too, out of the fully-shrouded barrel. The barrel is threaded with a ½-inch UNF thread and if you are a hunter, which no doubt you are, seeing as you’re looking at this FAC-rated PCP rifle, you will definitely need a moderator, as it is a little noisy. But if not, that heavy duty knurled thread protector is nice looking left in place.

All in all, the Nova is a great performer and looks quite elegant compared to most Hatsans with its great looking Turkish walnut stock. Yeah, it’s a little tractor-like, but it’s a tough work horse and I think the hunters amongst you will love it. Safe shooting! Rack.