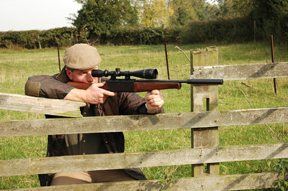 These days, it’s fairly commonplace for products to begin to resemble one another, with unimaginative companies just bringing out their own version of an accepted design brief.

An obvious example is the car industry, where trends are set and blatantly followed; SUV’s, 4x4’s, People carriers….the list is endless. One company has success with an idea, and the others all jump on the band wagon, eager for a slice of the action.

And so it can be with the airgun industry. Of course there are many exciting and groundbreaking products out there, incorporating ingenuity and original thinking, but many just follow the herd. Take the classic pre-charged pneumatic format; a barrel sitting atop a compressed air cylinder, a cocking bolt at the rear, and a raised breech block. Sound and look familiar? OK, admittedly the format has evolved through logical progression, and there’s no denying it’s a design that works, but many companies just introduce basic offerings that, whilst ‘ticking all the right boxes’ (to coin an annoyingly trendy phrase), bring nothing new to the table and fail to inspire.

My test rifle here, the Phoenix Mark2 , is an unapologetic non-conformist! Clearly the designer was ‘thinking outside the box’ (sorry there’s another), and the results are intriguing to say the least!

The somewhat enigmatic specification, actually reads like a riddle. It’s a PCP, yet there’s no sign of a bolt handle… It charges to a 200bar fill pressure - yet there’s no main air cylinder is to be seen… It has a Winchester style trigger guard lever action, but it’s not a firearm.

Nope! What we have here is a very clever piece of design work that conceals the ‘awkward’ bits of a conventional PCP allowing for a more streamlined, uncluttered profile.

Originally designed by Graham Bluck, the Phoenix unsurprisingly really does offer a radical approach. Basically what we have here is a PCP with a repeating action, that cycles the magazine just as fast as that lever action can be worked! Let’s take a closer look at the spec, then I’ll get down to that fast-fire performance.

My test rifle is the Carbine version, and, measuring just 33inches long; the barrel does appear a little snub-nose without the silencer in place.

Fitted with a two-part wooden stock, a ten shot rotary magazine and, as already stated, an amazingly fast lever cocking action, this is one exciting rifle that demands attention.

Compressed air is stored in a 190cc slimline buddy bottle, that screws into the main action block from the rear. Access is achieved by pulling off the solid black rubber butt pad. This reveals a small ‘Tommy’ bar which is slid into the rear of the bottle and used to unscrew it, once excess internal pressure has been relieved. The bottle can then be charged via a manual pump or divers cylinder in the conventional manner. With a fill pressure of 200 bar, max pressure of 250bar, and a burst pressure of 600bar, the safety margins are reassuring indeed.

This is also the Mark2 version, don’t forget, and many changes have taken place, setting this apart from the original. Other alterations, as you’ll see, are imminent; so just what’s fuelling this latest rise of the Phoenix? Allow me to digress…

Hugh Earl of PAX Guns, based in London, was particularly taken with the Phoenix concept, and when the rifle production came up for sale from Parker Hale, Hugh simply couldn’t resist, and acquired the business, immediately moving production from Birmingham, to his own dedicated factory in North London.

Having discussed at length the whole venture with Hugh, I can certainly vouch for his infectious enthusiasm for his new baby. His company mission statement is ‘Passion for Perfection’, and when he took over the business, Hugh could see that virtually every part of the rifle could be improved upon.

The complex cocking mechanism is a work of art, but other areas have benefited from Hugh’s unrelenting quest for accuracy.

Original rifles used a 10 shot rotary magazine from BSA, but the latest models now incorporate a revised design made in house. Barrels are another area where more control on production techniques is of paramount importance. Lothar Walthar barrel blanks are bought in (the industry standard after all), then sent away to be centre-ground (still in the UK). Hugh and his team then subject the barrels to one more machining process, before sending them for final blueing.

One other main modification concerns the internal pellet probe. With Hugh’s experience in pellet production (PAX make the Logun Penetrator and lead free Prometheus amongst other brands), it made sense to modify the rifles to suit his pellets. The Phoenix probe now fits the pellet skirt perfectly without crushing on seating.

The two-part stocks are one of the few other parts outsourced (this time heralding from Italy), and the quality of the timber and general oil finish was certainly up to scratch on the test rifle. I considered the cheek-piece just a little too low, yet in practise, where it matters obviously, it does the job perfectly.

With the action out of the stock, the robustness of the design becomes apparent; with the barrel, action block casting, and air cylinder, all chunky and seemingly bomb-proof. Socket headed bolts throughout, are the icing on the cake.

Future air cylinders will even be made in house, and with a conventional Schrader valve utilized (even replaceable by the customer), another possible source of annoyance (i.e. air leaks on PCP valves) has been thoughtfully eliminated.

Before I actually get to the performance, one final note concerns balance. With that air cylinder sitting at the rear, balance is further back than usual, so the addition of a silencer definitely makes sense here. With the short barrel of this carbine version emitting a real crack, there’s yet another good reason to screw a can in place on that ½ inch thread. This is another field where Hugh’s experience comes to the fore, as he manufactures carbon fibre silencers for many other makes. His own Phantom silencer looks the part, although doesn’t add much weight since it’s incredibly light.

And so - at last - to the range.  To fill that magazine, first pull the cocking lever down, then pull back the spring-loaded retaining catch and pull out the magazine from its slot within the action. Pellets are simply dropped into each aperture, and the drum rotated, until the mag is full. Push the mag home and return the cocking lever to the closed position. The magazine is numbered so the amount of shots remaining is never guess work. The Phoenix is now primed and ready for action.

PAX claim all 10 shots can be fired in 5 seconds! I managed 6 or 7, but there’s no doubting the validity of the design. In practise, I didn’t suffer a single foul up with the system, which isn’t always the case with magazine fed rifles; and the sheer enjoyment to be had here shouldn’t be underestimated.

The fun side of things is all well and good, but when you remember the price tag in this case, it’s only fair to expect some genuine performance, once the dust has settled.

Shooting from a rest over 30yds, the recommended Logun Penetrator pellets tore superb groups of just over 1/4inch, proving that the basics are nicely in place.

I have to admit, that first impressions set me thinking the worst about the trigger (I’m rather fussy in this department), but despite the slightly minimalist appearance, the unit is both pleasantly light and enjoyable to use. Some creep was present, but with the final release pressure still fairly light, accuracy wasn’t hindered.

Hugh Earl stressed that his company are at pains to make any of their claims easily substantiated, so their shot totals are always on the conservative side. From a fill pressure of 200bar, the Carbine obviously produces less shots than the full length rifle, yet the figures were bang on the button. Consistency over the chronograph was good, with a variation of just 17fps over the claimed 60 shots, and on test, just 20fps over 70 shots.

That rearwards balance is at first a little disconcerting, but once familiarization sets in, the civilized nature of the entire firing cycle makes shooting the Phoenix an extremely pleasant experience indeed.

If it were my rifle, I’d opt for a much heavier silencer and probably the full length action, but I’ve always liked significant front weight, whereas many shooting friends are nowhere near as picky.

Despite being designed primarily as a hunting rifle, the sheer accuracy potential and fine mannered firing cycle means the Phoenix wouldn’t be out of place on an HFT course; although, as always, a strict safety regime would have to be adhered to - par for the course where all magazine fed rifles are concerned.

In short, Hugh Earl and his team deserve praise for fanning the flames, and injecting new life into a great design. At £695, the Phoenix isn’t cheap but it’s immensely appealing.

I think we’re going to see a lot more of this rifle, and with plenty of exciting ideas in the pipeline, the Phoenix brand appears to be in safe hands.