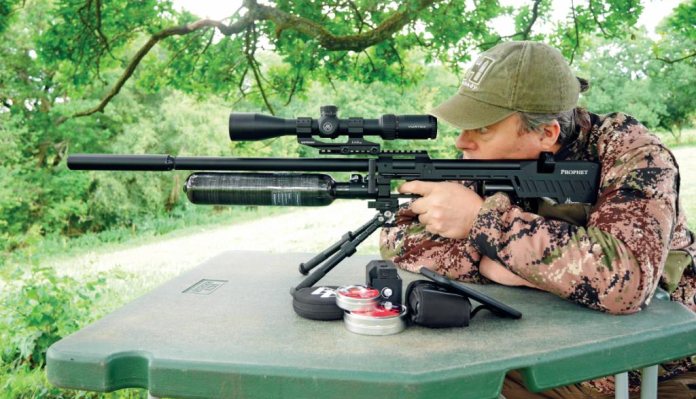 Few people had heard of RTI Arms until their shooters turned up at the October 2019 Extreme Bench Rest (EBR) championship and took gold in the 50 yard event. They also chalked up the highest ever score at 75 yards. Suddenly, this small Slovenian company was on everyone’s radar and their flagship Prophet rifle was topping wish-lists around the globe.

RTI’s UK importer is City Air Weapons and Firearms, located a stone’s throw north of Birmingham’s historic Gun Quarter. Owner Bob Phelps kindly sorted me out with a FAC-rated Prophet in .22, a .25 conversion kit (barrel, probe, muzzle-cap, and magazine), plus a set of performanceenhancing upgrades in the shape of a 500cc carbon-fibre bottle, an externallyadjustable regulator and an extended butt plate permitting external hammerspring adjustment via a hex socket.

The Prophet is a development of RTI’s debut model: the Priest, which is now in its Mk2 version. What sets the Prophet apart is its optimisation for long-range accuracy and rapid-fire: two qualities essential to EBR competition. This is achieved through the use of a longer (24”) Lothar Walther barrel with a 6-groove, 1:32 twist, optimised for stabilising heavier pellets at high (1,000 FPS) velocities, a larger 57cc plenum chamber, a 190mm Picatinny optics rail with a 20 MOA pitch, and a biathlon-type lever for greater mechanical advantage. Simply put, the Prophet is RTI’s EBR ‘race gun’. You could run one at 12 ft/lbs, but that would be like taking Popeye off the spinach.

The Prophet is also very much the modern bullpup PCP in its purest form. There’s no stock as such, just a couple of skeletonised metal plates protecting the trigger and cocking linkages, a ridged metal butt plate and an AR-15 style pistol grip. Your cheek rests directly on top of the rear action block, and your front hand has nothing to hold but the air bottle, except that’s not the way the Prophet is designed to be shot. Bench-rest, remember.

Instead, you clip a bipod to the short Picatinny rail under the trigger guard, extend and angle the legs out forward on the bench and grasp the pistol grip with your firing hand. Then bring your other hand back to the cocking lever for a fast follow-up shot before the wind window closes. Which is why the cocking lever is on the left-hand side. It’s in the middle of the rifle, too, so you can retain your firing position throughout the cycle. Happily, this is also the perfect layout for a south-pawed hunter like me, since I can operate the lever without losing contact with the pistol grip.

Also designed for the bench are the Prophet’s low profile and correspondingly-low centre-of-gravity, along with a balancing point located just ahead of the trigger guard, all of which add stability on the bench.

Calibre changes are easy, although you will need to buy a barrel removal tool as well as the kit for the new calibre. With the threaded muzzle cap removed, the tool is screwed onto the actual muzzle thread, which sits some 5cm down inside the shroud. Then you take a 3mm Allen key and remove the grub screw in the front of the action block to release the barrel, before drawing it out of the shroud with the tool. Now attach the tool to the new barrel and guide it down the shroud to the breech. Head-spacing is as simple as butting the breech against the magazine body. To secure the barrel, turn it until you see a flat surface then reinstall the grub screw. A transverse, keyed-in system, would be preferable for field use, but RTI’s minimalist solution is just fine for bench-rest.

The pellet probe is similarly easy to swap out, it is also held in place by a single 2mm grub screw, accessible through a hole in the rear top of the action block when the bolt is drawn back. With the screw removed, the old probe can be slid out through the magazine channel and the new one inserted in the same manner. The final step is to install the new calibre-specific muzzle cap.

The cap is fitted with a ½” UNF male thread and comes with a neat thread protector. For field use, you will want to fit an aftermarket moderator. The space between the muzzle and muzzle cap, combined with vents in the barrel bushing that allow some gas expansion into the shroud, do cut the report from a level that requires ear protection to one that is merely loud. However, for any degree of stealth, a moderator is an essential purchase. Even suppressed, the Prophet seems louder than it is because having the transfer port right under your cheekbone really lets you feel the energy pulsing through the rifle as you fire. Not unpleasant, but definitely stimulating!

Installing the extended butt-plate is as simple as unscrewing the factory plate, switching out the springs and guides, and bolting everything back together. This adds 2cm to the standard - and slightly short - 33cm length of pull (LOP). Fitting the adjustable regulator is a bit more involved, as you have to de-gas the system via a 4mm hex bolt accessed through a hole in the butt-plate before separating the standard regulator from the bottle and screwing in the adjustable unit. This sports two gauges, a male Foster coupling port, a hex-head adjuster screw, and a pressure range of 50-200 bar plus is pre-set at 125 bar. You can adjust the regulator up or down while pressurised, but when dropping the pressure do so in small (1/8 turn) steps dry-firing several times each time to clear the plenum. When increasing the regulator pressure, note that it will settle back 20 bar or so as you shoot. After any adjustment – regulator or hammer spring - you’ll need to shoot 6-8 shots before you see the true velocity and group size. With the upgraded regulator and butt plate fitted I loved how quickly and easily I could tame the rifle’s raw performance and tune it to get whatever I wanted from it, with any ammo.

On both regulators, the foster coupling sits uncovered and fully proud. No problem on a bench gun, but something to watch out for in the field. Also, a testament to the rifle’s competitive orientation is a second connector tucked underneath the rear action block that allows you to remove the buddy bottle and run the rifle directly from a full-sized scuba tank. Recommended fill pressure is 300 bar. With a standard regulator pressure of 125 bar and a baseline MV of 1,020 FPS with an 18.1-grain .22 pellet, the Prophet gives a huge 180 shots per fill from the 500cc carbon bottle vs. RTI’s figure of 110 from the standard 350cc aluminium one.

The second stage of the 2-stage trigger is also externally adjustable, via two ports in the right-hand side of the rear action block: one for sear engagement and the other for spring tension. Each one is clearly marked with an icon and +/- indicators plus is just big enough to accept the 1.5mm hex key required. The first stage is not adjustable, and neither is the trigger position, which – as is typical of rifles fitted with AR grips - offers too short a reach. Nevertheless, I like RTI’s choice of an Ergo-style factory grip.

Another EBR box ticked by RTI is a 100% reliable magazine. Made from polymer, it holds 12 pellets in .22 (10 in .25, 14 in .177, and 7 in .30) and is clearly marked for calibre. It can be inserted from either side, without modification, which is very clever. To fill it, you simply face it in the right direction and push pellets in from the rear, moving the rotor on one chamber at a time. The filled chamber also stays put until you move the rotor on, so you can release it at any time without having the rotor spin back on you, which is nice. Nicer still was putting over 1,000 pellets through the rifle without a single hang-up or double feed.

You will gather from this that the Prophet was immensely addictive to shoot, with shot after shot slamming into steel right out to 100m and the fast-cycling action keeping the spinners wind-milling until the bolt hit the buffer on the empty mag. I just wish I’d worked out in advance that 25.39-grain JSB Monster Redesigns departing the muzzle at 935 FPS would retain a whopping 28.5 ft/lbs 100m down range: enough to leave my long-suffering Nockover targets well-and-truly bent out of shape! The crows have also taken a hammering, but the high-power Prophet’s true role isn’t as an apex predator, but as an EBR podium-topper, or simply as the ultimate hard-core plinking machine!