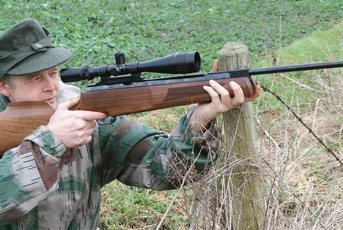 I am not sure what it is about those big .25 pellets, maybe it`s the way they transfer energy to any quarry you shoot or that pellet choice can be critical. Whatever it is, it’s always fun testing rifles of this calibre.

At 12ft/lbs the effective range of the .25 is understandably limited, which is why a Theoben Eliminator in .25 rated to 24ft/ lbs really gets the juices flowing. Originally set around 30ft/lbs a power setting at 24-25 ft/ lbs ensures pellet skirts are less likely of being damaged and thus this Eliminator was extremely accurate over my test. Once .25” pellet choice was limited, now there’s a far broader selection.

This is a big rifle, 48” long with the Evolution silencer fitted and although it looks a bit of a handful the overall weight of 8.9lbs helps it to settle it in the shoulder comfortably and dampens recoil further.

I like the Eliminator action, I have one in .20 calibre and it’s a devastating vermin tool. I also like its self-contained power supply without any worry of running low on air or velocity dropping off as you would a PCP. Propulsion for the Eliminator is Theoben`s gas ram system, which is essentially an air strut (like a shock absorber) acting much as a spring/ piston would in a standard air rifle. This is the heart of the Eliminator - the super smooth gas ram action that uses a High Efficiency (H.E.) piston to propel a pellet without the use of springs. What you get is a super fast lock time, shot to shot consistency and no spring noise!

The up-rated performance comes from redesigning the gas ram to produce a longer stroke piston to up the power and a clever recoil damper valve or inertia system. This effectively cuts out the vast majority of recoil and smoothes out the entire firing cycle so accuracy can be consistently applied at these power levels.

All this power is controlled by the Evolution trigger unit, a great improvement over the old model that adorns my Eliminator. The new and re-designed mechanism has a slimmer blade and is fully adjustable to allow a clean break and predictable second stage that trips at a pleasing 1.5 lbs. Just forward of the blade and within the guard is the safety catch which automatically sets on cocking. A practical feature which stops you accidentally touching off the trigger when returning the barrel to the locked position.

The 16” barrel is made by Walther and is choked at the muzzle to achieve the ballistics and accuracy needed to launch pellets at FAC ratings. It is 16” long and fitted with the excellent Evolution silencer that cuts the report to a dull ‘thok’. The lock up in the breech jaws is positive and the detente solidly holds the barrel parallel to the air transfer port, which is essential for good accuracy. Cocking effort is certainly noticeable and a sharp rap on the silencer breaks the tight hold of barrel to action. A steady controlled sweep of the barrel downwards, with the heel of the butt pressed into the stomach, helps to stop the rear end of the rifle lifting out of your grip under the pressure.

Another useful feature is the Dampa scope mount. Its rubber, metalastic bushes allows the scope to float at the moment of recoil. This design means the scope recovers back to its original position without loss of zero and the chance of breaking the reticule is greatly minimised.

This model shows a nicely grained and coloured piece of walnut with a subtle oiled finish. It’s well designed with a nice Schnabel forend that gives a positive stop for the supporting hand. The generous pistol grip has a vertical thumb rest which aids consistent hold. There’s also a high swept, right hand cheek piece, however an ambidextrous version is also available. It gives a great look and essentially aligns the head and eyes for scope use. The ventilated recoil pad grips nicely although I thought the chequered panels on the forend and pistol grip were too small.

As with all Eliminators you need to cradle the rifle and not clasp it tightly to get the best accuracy; recoil is very slight anyway and proper follow through is essential. I fitted the excellent LightStream 4-14 x44mm scope for the test.

I managed to source 13 different .25 pellet brands, mainly from Ivan at CH Weston’s. Some were tighter in the bore than others like the Spitz Kugeln and Ram Points, which is reflected in the accuracy. Some were loose like RWS H-Points, whilst the Korean heavy weights would not fit at all! In the past I have used a Terry Robb .25 pellet swaging tool to size each type exactly to fit the barrel, but for the test I shot ‘as is’ straight out of the tin. Weights ranged from 19 to 35.4 grains and thus velocities varied accordingly. The .25” will never be a speedy calibre but that’s not the point, as an FAC-rated rifle smoothes out the curved trajectory that you would normally get with a standard 12ft/lbs gun.

So what is the best, or the best compromise for this Eliminator? Best accuracy went to the 26.2 grain Bisley Pest Controls at 0.57”, they fitted the bore well and delivered 623.5 fps/22.6 ft/lbs. In fact the next three pellets were almost as accurate, the Logun Penetrator, H&N FTT and new RWS Superdomes shot superb 0.62, 0.64 and 0.73” respectively. The Logun weighs 25 grains with an aerodynamic design that out of the Walther tube did 658.7 fps/24.1 ft/lbs , second highest, and 0.62” groups at 40 yards were very impressive.

Almost as impressive were the new RWS Superdomes, they were second heaviest at 31 grains so gave the lowest velocity of 573.2 fps but delivered a healthy 22.6 ft/lbs. Best of all five shots consistently grouped into 0.73”, a really hard hitter and great for ratting. Highest energy went to the RWS H-Points at 24.4 ft/lbs but sadly they were loose in the bore so accuracy was not too good.

I really liked the H&N FTT as the fast velocity will flatten that trajectory, although the Pest Controls gave the best accuracy and the new RWS Superdomes the Logun Penetrators had a good blend of velocity and energy as well as accuracy. For a sledge hammer pellet are dynamite.

These big old pellets really hit hard and deliver a lot of energy to your quarry and those RWS Superdomes are like a sledgehammer. Logun Penetrators would be my overall choice for accuracy and performance for a vermin pellet.

Maybe I am biased as I own an Eliminator, then again I wouldn`t unless I rated it, and I have to say this .25” dustbin-sized pellet flinging example is no exception. There is a knack to shooting them accurately but once mastered the results are splendid.

The price is excellent given the quality of manufacture and ability of the rifle - and that includes the silencer! A bit more dark staining of the wood might be nice but that’s just my choice. Overall the Theoben Eliminator is a great alternative to a pre-charged, FAC-rated air rifle especially in .25 calibre. GM