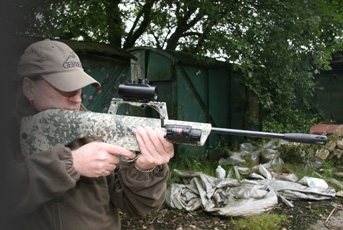 The major Spanish gun manufacturers seem to be releasing new air rifles daily and most are certainly getting more radical. This month it’s the turn of Norica and some may feel they’ve possibly gone too far in the ‘eye-candy’ stakes. I say this not only due to design, but it can be purchased in the digi-cam stock shown here and there’s a black version available too. Either way this is either a bold move or a big mistake as it appears that Norica have managed to create the first production, spring-powered bullpup.

Well actually they have not and it’s best to call it a semi Bullpup as admittedly it fits some of the length of the compression cylinder in the butt area, but not all, and also it loads in front of the scope as does a conventionally laid out springer. It does however suffer from the designs two main faults - a necessarily high sight base, which puts the optic way above the bore line and a creepy trigger, as the actual trigger mech still sits at the end of the action and is connected by a link to the forward-located blade. But by the same token it does reduce overall length, which is never a bad thing…

The adventurous side of me has me chomping at the bit to get testing but the experienced half has me dreading what I might find.

It seems that Norica have taken the Goliath’s inspiration from the Walther G22, 22 semi-auto Bullpup rifle. The digi-cam pattern and dummy flash hider do give it a military look and to a degree even disguise the fact it’s an air rifle to uneducated eyes.

Due to the fact that the air cylinder is encased, the stock simply extends around the rifle, with the rear acting as a cheek rest but simply following rearward in a straight line behind the handle which doubles as the mounting area for an optic. At the rear is a length-adjustable, thick, black rubber butt pad.

Overall length is 33.5” but obviously this will increase should you use the extending butt pad option. In the ‘flush’ position this gives you a length of pull (LOP) of 14.25.” Longer than a normal air rifle but in this ‘bullpup’ configuration you don’t feel you’re overly reaching for the trigger. The other two settings increase the LOP to 16” and 17.5”. Adjusting the pad is accomplished by pressing in a large round black button set flush on the right hand side towards the rear of the butt section of the stock.

The large thumbhole and pistol grip are pure military, with finger grooves and integral stippling. The trigger lever shows an automatic safety blade both set inside a teardrop shaped guard, which leads into a very stubby forend. Either side of this are two short lengths of Picatinny/Weaver rail so you can add flashlight or laser if you want to rig up for an urban insurgence… When I come to performance you’ll realise that these could help you in targeting if used correctly with certain optional extras.

The 14” barrel unlatches quite easily but due to the short action the rifle does take a bit of heft to cock. I’d already fitted a Nikko Stirling 1 X 30 Reflex sight onto the ‘handle’s’ top Weaver rail and was keen to begin making groups. The safety catch is automatic so engages as soon as you cock the rifle. It’s on firing that you will be either smitten, or alternatively wonder why the company have taken the bold step in bringing this odd design to the table?

First the trigger has a lot to contend with and as its holding back a short and powerful spring, so the pull weight is too heavy. It’s also quite ‘lively’ during the firing cycle and has a moderately loud muzzle report. However, take the time to ‘tame’ this rifle by way of learning how to shoot springers again (spoiled PCP users) and in less than a dozen shots you realise why air rifles are such fun.

Accuracy after setting zero at 12-yds was surprising with ¼” groups soon achieved using Norica, Flat Head, Promatch pellets. However, move backwards or forwards only a yard or so and your point of impact changes dramatically. We all think we can judge range but at close to moderate distances it’s harder. This is where the side rails on the forend for me are necessary, even if you fit just one laser. I used a Nikko Stirling laser/flashlight combo to aid in range estimation. You’ll be much better served, due to the fact the red dot sight’s aiming point stays true on the horizontal, so match it to a side-mounted laser at the same set zero and it will give you the indication needed how far you are off zero when you see a discrepancy.

The Goliath 88 is a very difficult rifle to master for consistent success. Perseverance did eventually see me get used to the red dot and laser set up, but I was only confident in taking live quarry when I was only a few yards from the zero.

Love It or Loathe It?

Summing up this air rifle is a difficult one as due to its uniqueness it doesn’t easily fall into any specific category of plinker or hunter.

As a second rifle for specific tasks then it’s got a lot to offer in terms of handling and accuracy, while weighing only 6.6lbs un-scoped means you’re not toting unnecessary baggage. However, it’s not something that will appeal to everyone and certainly not one I’d advise a newcomer to the sport to look to as a first purchase. Also, you definitely have to be prepared to spend time getting used to the exaggerated trajectory, due to the fact the sight sits so high above the bore line.

In fact, I urge readers to refer to my thoughts on lasers in my ‘Airgun Hunting’ series as this will definitely be of help if you decide to try this air rifle. One thing’s for certain though - shooting the Norica Goliath 88 is both enjoyable yet challenging, and though it may at first be infuriating to get to grips with once mastered it’s a very satisfying rifle to use.