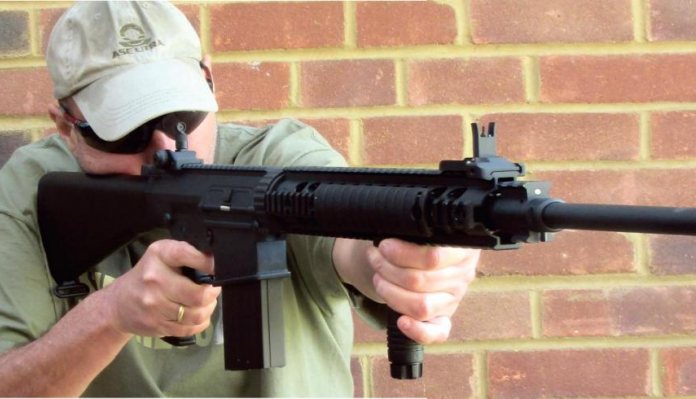 If you watched the 2014 biographical movie ‘American Sniper’, about the life of Chris Kyle, then you’ll know that there were a number of ‘stars’ in the film apart from Bradley Cooper, namely the McMillan TAC-338A, the Remington Mk 13 Mod 0, and the Knight’s Armament SR-25.

‘American Sniper’, as with any good ‘war’ movie, had an immediate and profound effect on certain parts of the airsoft community around the world, and it always amazes me how quickly this happens. Over the years, I’ve seen numerous movies come to the big screen and, quite literally, within days of their release there will be an airsofter showing absolutely stunning images of their blockbusterinspired loadout online!

Now we all know how scrupulously living historians research and assemble their ‘impressions’, often going to extreme ends to ensure authenticity and, within a certain section of the airsoft ‘loadout’ creators, the research and acquisition of the exact right gear and military firearms is no less fanatical. I use ‘fanatical’ here as a term of admiration, as to see a ‘loadout’ done right is a beautiful thing!

One thing I have noted, though, is that sometimes the ‘loadout’ is the be all and end all, and I’ll give an example here; a couple of months ago, I was at a skirmish game and an entire team arrived decked out in superb ‘Afghan-period SF’ gear, with everything proper and correct, right down to some absolutely splendid early-model M4 replicas. I took one look at them and nodded approvingly at their efforts; sadly, when it came to actually using their ‘tools of the trade’, things were not so up to scratch!

By the end of the day, we were referring to them as ‘Team Bimble’, as when it came to a firefight, their lack of urgency and ‘drive’ was somewhat lacking! At one point, and to bring this story back to where it should be, my group were pinned down by a plucky marksman. At this point in the proceedings, the ‘Designated Marksman’ from ‘Team Bimble’ appeared at my shoulder with a stunning SR-25 and told me ‘it’s okay, I’ve got this!’ After fiddling with his (rather expensive!) optic for a while, he decided to finally take his shot – and missed! We went through this twice more before I finally got tired of the rigmarole, popped up from cover and double-tapped the OPFOR shooter - with my ASKU!

We have a phrase in airsoft that I believe has come to us by way of the military itself, ‘all the gear, no idea’, and my experience of ‘Team Bimble’ certainly reinforced this. The SR-25, even in airsoft form, is a fine rifle and, if set up and utilised correctly, can be a real ‘force multiplier’, reaching out to deal with problems from a distance, whilst retaining the fast-firing properties of a semi-auto carbine.

The Stoner Rifle (SR) 25 was designed as a designated marksman rifle (DMR) and semi-automatic sniper rifle and manufactured by Knight’s Armament Company (KAC). In the early 1990s, Eugene Stoner joined KAC and continued his AR-10 design work after Colt had basically lost interest and favoured the AR-15 to the exclusion of other designs. The end result was the SR-25 (adding together the numbers of the AR-10 and AR-15) which improved the AR-10 design with M16A2 advancements and parts commonality; loosely based on Eugene Stoner’s AR-10, and rebuilt in its original 7.62×51mm NATO calibre, the SR-25 proved to be a real winner.

The SR-25 was released in the early 1990s and had a heavy, free-floating 24-inch (610 mm) match grade barrel (originally manufactured by Remington Arms) with a fiberglass handguard. It had a flat top upper receiver with a Mil 1913 rail for mounting optics and a two-stage, match grade trigger. The bolt carrier was similar to the AR-10’s, being chrome plated and having a captive firing pin retainer pin. The SR-25 was designed specifically to fire 168 grain (10.9 g) open-tip match cartridges. Accuracy was guaranteed at or under 1 minute of angle. At first, AR-10 type 20-round magazines were used, but they were later replaced by steel 20-round magazines resembling those used by the M16.

The United States Special Operations Command (USSOCOM) really embraced the SR-25, particularly given its magazine capacity and faster engagement reactiontime compared to bolt-action rifles. After some modifications, SOCOM adopted the SR-25 as the Mk 11 Mod 0 in May 2000. Changes included a shorter 20-inch (510mm) barrel that could fire M118 and M118LR 7.62x51mm NATO rounds and had a quick detach sound suppressor mount. An 11.35 inch (288 mm) free-floating handguard rail system allowed mounting accessories. Flipup front sights and adjustable back-up iron sights were added, and an M16A2 stock and pistol grip were used.

During the Iraq War, the United States Marine Corps ordered 180 Mk 11 Mod 1 rifles. These were Mk 11s equipped with the upper receiver of the M110 Semi-Automatic Sniper System (SASS). The M110 upper gave the Mk 11 Mod 1 a URX modular rail system and a flash suppressor on the barrel. These saw limited use before they were phased out when the Marines chose to purchase the Mk 11 Mod 2, which was simply the USSOCOM and U.S. Navy designation for the complete M110 rifle!

I’ve often commented on the fact that many airsoft replicas are usually far more available than their real-world counterparts, and the Knight’s Armament SR-25 is a classic case in point! Although in 2009, the M110 rifle and commercial equivalents were added to the list of NFA-legal US service rifles under rule 3.1.6 of the NRA High Power Rifle Rules, owning one of these in real military fettle is nigh-on an impossibility outside the USA!

So, for living historians and ‘loadout specific’ airsofters, the 6mm BB SR-25 is the way forward and, when it comes to the A&K version, you can pick one up for about £280! This gets you a stunning replica of the military rifle that can actually perform on the airsoft field too. What you get is a solid, full metal replica with plenty of grunt, a foregrip, two rail panels, and a QD suppressor!

The full-length front rail system is perfect for the attachment of accessories, such as foregrips or bipods, and the contiguous rail on the upper receiver just cries out for an optic! The lower receiver features the standard AR Fire control configuration, making this a familiar rifle to those used to an ‘M4’. Internally, this weapon features a Version 2 Extended Type AEG gearbox, which, along with the Long Type motor, gives both durability and efficiency; A&K has been in business for more than a decade, boasting a huge selection of popular rifle models, so they know exactly what to use to create the desired effect in what can form the base for a superb airsoft ‘DMR’!

At 1130mm long and weighing in at 3444g, this is not a super-lightweight rifle that’s easy to manoeuvre around and, with an out of the box power level of 0.99-Joule/328fps on .20g RZR BBs, it’s immediately usable and effective as a skirmish gun, and the long inner barrel certainly gives it some legs! From the box, I was quite happily hitting targets at 30m using the iron sights provided, and I’d like to take this out on the longer range to see what it can do when properly unleashed with a decent optic on top!

Where the A&K SR-25 really comes into its own though, is when you start to treat it like a true DMR, restrict it to semi-auto only and crank up the power level a bit! Most sites now run a dedicated DMR rule that may let you upgrade your rifle to 400fps+ if it’s based on a ‘real world model’ and physically restricted to semi (this is also a legal requirement, let’s not forget!) and most good airsoft techs can do this for your easily.

Although the A&K is a lovely, and I would stress perfectly usable, rifle from the box, upgrading it to maximise its full DMR potential and, most importantly, learning to use it properly with a good optic and a bipod will make you a LOT of friends on any airsoft field - if you’re on their side!

Thanks to NUPROL who have recently taken over the A&K distributorship, the SR-25 should now be much easier to find in the UK! Please head to nuprol.com for more details on the A&K range of airsoft replicas and where to find them.