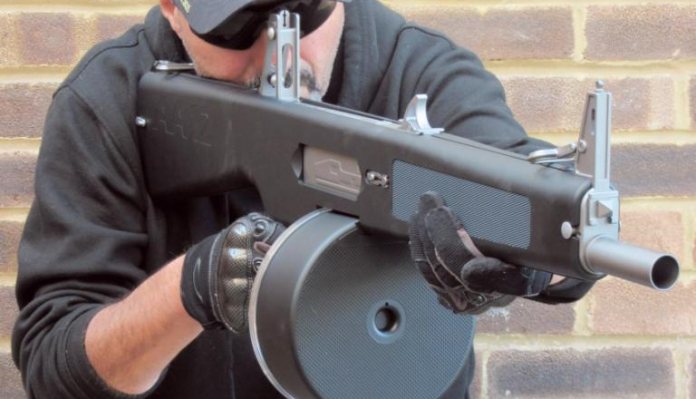 When you positively, absolutely need to put fire downrange, nothing fills the air with BBs quite like an airsoft shotgun, especially a tri-barrel. I’m an enormous fan of airsoft replica shotguns and own quite a collection, ranging from a vintage gas Tanaka M1897 ‘Trench Gun’, right up to the very latest APS shell-ejecting 870, but until recently one model I never thought I’d see in airsoft guise was the Atchisson Assault Shotgun, or AA-12. Fully automatic and drumfed, the AA-12 fires five 12-bore shotgun shells per second, with extreme reliability and so little recoil that strong men can shoot it one handed, as Arnie proved so delightfully in ‘The Expendables’ series of movies.

American firearms designer Maxwell Atchisson first announced the Auto Assault-12 (AA-12) in 1972. Originally designed and known as the Atchisson Assault Shotgun, this weapon was intended for close combat in environments like city streets or jungles. It was to provide tremendous short range firepower for troops during ambushes, room clearance operations and other such combat situations. The first prototypes were rather simple in design and used certain parts from existing firearms, and they were highly unusual in that Atchisson used a most unusual method of operation, simple blowback with advanced primer ignition. This shotgun fired from an open bolt, and had a 1.4kg bolt. To reduce felt recoil and the rate of fire, Atchisson used an extra-long recoil system, in which the bolt recoiled much further back than it is usually required to reload a weapon. The receiver of the early Atchisson shotgun was made from steel tube, with an M16-type buttstock and forearm. This shotgun also employed a trigger group borrowed from Browning BAR-1918 automatic rifle, which allowed for selective semi-automatic or fullautomatic fire. Feeding was from detachable magazines, either 5-round boxes or 20-round drums. To provide necessary support for the heavy drum magazines during recoil, the gun was equipped with a distinctive magazine support bracket that rested against the pistol grip. Simple open sights were fitted, with non-adjustable rear diopter and post front, both mounted on high bases.

During the late 1970s and early 1980s, Atchisson reworked his basic design from an open bolt blowback action to a safer locked breech, gas operated action. This was done due to the use of more powerful, specially developed military shotgun ammunition loaded with flechettes or a heavy load of buckshot. The updated weapon retained the long bolt travel, but had more conventional hammer-fired trigger unit. The stock and receiver were also redesigned with the receiver, shoulder stock and forearm made as a single housing, assembled from two symmetrical units, left and right. This weapon was also select fire, and used an M16-style safety / fire selector on the left side of receiver, above pistol grip.

In 1987, Atchisson sold the rights of the AA-12 to Jerry Baber of Military Police Systems, Inc in Tennessee, and MPS in turn developed the successor simply known as Auto Assault-12, which was redesigned over a period of 18-years with 188 changes and improvements to the original blueprint; MPS also teamed up with Action Manufacturing Company, and Special Cartridge Company to combine the gun with FRAG-12 High-Explosive ammunition into a multifunctional weapon system. The weapon was lightened to 4.76kg

(10.5lb) and shortened to 966mm (38.0-inches) but retained the same barrel length. The CQB model had a 13-inch barrel, and was half a pound lighter than the regular model. Due to the abundant use of stainless steel and the designed clearance for fouling, MPS claimed that the weapon required little to no cleaning or lubrication.

It is rumoured that the AA-12 has been used in limited numbers by some US agencies, but so far there is no real, confirmed information on the actual use of this awesome weapon, which traces its lineage to the final days of the Vietnam War.

Japanese airsoft giant Tokyo Marui are well known for innovation and pushing the envelope when it comes to their replicas but it has to be said that their release of a fully functioning, fully automatic electric AA-12 came as a total shock to the airsoft community worldwide. Whilst the USA expect things to be launched at SHOT, and we in Europe look forward to seeing new products at IWA, Tokyo Marui stunned the community by launching their AA-12 at the 54th Shizuoka Hobby Show in May 2015, in Japan!

There had been ‘sneak-peeks’ of their new gas M4 MWS, and most of us thought that this would be the main news of the show, but when video started emerging online of the AA-12 the news spread faster than a shot scatter pattern; this was the first Airsoft Automatic Electric Shotgun (AES) in the world, and it came with three inner barrels. Each inner barrel could be individually adjusted by sliding open the ejection port cover, and three hop-up wheels controlled the spread of how the BBs came out, and inside the replica a three cylinder mechbox drove 30 BBs out a second in full-auto mode!

This replica, although it looks quite ‘plastic’ is, in truth, no lightweight as it weighs in at nearly 4kg. Up close though, the polymer finish on it is beautiful, with some super chequering around the pistol grip and forestock. The shiny metal parts also look great and make it feel authentic to the real thing. Everything inside is newly designed, including the motor. Tokyo Marui recommend using an 8.4V battery as anything lower than 8.4V will not drive the gun, and with an 11.1V the gun will automatically stop before any damage occurred, thanks to a built in FET system (an electronic switch system with three-cylinder adoption).

The AA-12 replica comes as standard with a 93 BB box magazine with the title ‘SLEDGEHAMMER’ on it, but you need to be careful with this in use, as spitting three BBs at a time will empty it in three-seconds flat; the magazine will feed each and every BB though, as it comes with a follower to drive them up into the gun. Additional box magazines come in at around the £26 mark, but thankfully, since the initial release of the shotgun last year, Marui have also created a 3000 BB Electric Drum Magazine, which using four AAA batteries, allows simple push-button electric winding. This sells for £100 but, oh my, this is definitely what all AA-12 owners have been waiting for; this, when filled with BBs and with batteries installed will add over a kilo to the weight of what is already a pretty heavy replica, but what a difference it makes!

I specifically held this review back as a) I wanted to see how the new internal component system fared over time, and b) what difference the drum mag made. First up is the durability question; Marui are well-known for the longevity of their internals and the AA-12 luckily follows this tradition. I’ve spoken to happy AA-12 users who have used one since the release and all of them rave about the performance, so all good there. As I said earlier, with the standard magazine, all your BBs are gone in one three second burst, but with the drum you can just go on, and on, and on.

As with all things Marui, the drum comes in a striking box, but also as usual there is no real help with the setup as everything is in Japanese! Again luckily, if you simply type in ‘AA-12 Drum Magazine’ to your online search, there are numerous videos that will show you exactly what you need to do.

So, with the Drum magazine set up and filled to the brim with a whole bottle of .20g ASG BLASTER BBs and a suitable NUPROL battery fitted, it was finally time to head to the range for some testing; an interesting point here is that the battery is housed in the buttstock, and Marui have made life easy by making a quick-detach buttpad, which gives swift and easy access to the battery compartment. Not only this, but if you try to fit a battery that is too powerful a small red light illuminates; this same light will also start to flash when your battery is getting low too.

The three hop-up adjustment wheels are located behind the shell ejection-port cover and are accessed by simply pulling back the charging handle, which sits on top of the shotgun. The three wheels are clearly marked left, top, and right and each barrel can be individually set; the two lower barrels have the hop-up on the sides, which is actually pretty cool, as by setting them properly you can simulate a shot spread!

The magazine, box or drum, go straight up into the body of the replica thanks to a neatly replicated track in front of the pistol grip; when fitting the drum magazine there is a small catch to be installed to the base of this track, which will stop it falling out should you inadvertently hit the magazine release situated on the trigger guard. This catch does not interfere with the box magazine, so once installed it can just stay in place. A small button on the bottom front of the drum activates the winding mechanism, and everything loads up in no time.

Tokyo Marui are not known for overpowering their airsoft replicas, so it came as no surprise to me when the AA-12 registered a mean of 0.62Joule/258fps through the chrono; for a replica that will undoubtedly be used in a CQB environment this is actually perfect. With the fire selector, which is found on the left-hand side of the AA-12 above the pistol grip, set to semiauto it was onto my spinners at 10-metres and with three BBs exiting with every squeeze of the trigger, each target was hit first time. Still on semi, I moved out to the sandbags at the 30-metres extent of the range, and again it was a hit every time, so although the AA-12 is not highly powered it does have some grunt to it.

Then of course it was time to set the selector for full-auto and really have some fun! I’d taken an old cardboard delivery box about three feet long and a foot square to the range, specifically to see what the AA-12 would do and the replica simply tore it to shreds in quick time! This is a replica that will devastate the opposition when properly deployed.

At £399 for the AA-12 itself and an additional £100 for the drum mag it’s never going to be an impulse buy; personally I haven’t used a drum in years, or indeed a hi-capacity mag very often, but this beast would definitely tempt me! I’ve got a ‘postapocalyptic’ themed game to attend at the weekend, and you know what? I believe the Tokyo Marui AA-12 AES might just be the very tool I need to deal with the ‘Wastelanders!