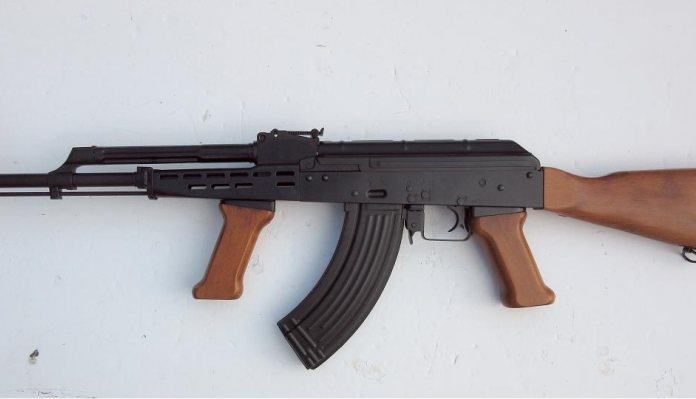 The ‘Automat Kalashnikova’ of 1947 created by Mikhail Kalashnikov was a real Kirza-boot step forward in the world of military firearms, allowing the humble infantry soldier access to a fast-firing, durable, and above all reliable battlefield tool. The humble AK has come in many variants during its long service life, even within Russia, but when you take into account the number of models ‘based’ on the AK but built under licence in different Soviet Bloc countries, the variations can become somewhat mind-boggling!

The AK, including all of its variants, has truly become the most widely manufactured and used firearm form in the world, of this there is little doubt. One of the first licence agreements after the initial Russianonly manufacture of the AK-47 was with the Hungarians. By 1957 the Magyar Nephadsereg (Hungarian People’s Army) decided it was high time to replace their aging and outmoded bolt action Moisin Nagant rifles with a modern AK-47 style battle rifle. The Hungarian AK was designated the AK-55 and it was simply a direct copy of the Soviet AK-47; it came with a cleaning rod and lacked a bayonet lug, but a barrel-mounted bayonet was available. Manufacturing quality was very good.

Femaru-Fegyver-es Gepgyar (FEG) based in Budapest started re-tooling for the AK in 1957, and the first AK-55 left the factory in 1959. The receivers, which were machined from steel blocks, were made by Danuvia Gepgyar initially, as that company boasted better machining facilities than FEG. The stock, chequered pistol grip and forend were made of wood. The serial number was usually stamped into a panel milled out of the left side of the receiver, but manufacturer’s marks were rarely present. The AK-55 shared a basic form and structure with the AK-47, in particular the space in front of the extraction slot, where the charging handle protrudes. In most photographs along with almost every text that describes the AK-47 and its many variations, the space in front of the bolt handle/extraction slot contains a rivet or pin. The original forged and machined upper receivers had no pin / rivets in front of the charging handle, but maker’s marks and proof stamps were displayed. The change in the structure was due to the shift in manufacturing from the forged and machined receiver to the lighter sheet metal receiver. This alteration to the design made the AK-55 two-thirds lighter than its predecessor, and it was adopted in every evolution of the Hungarian AK afterwards. This modification has been left out of many historical accounts of the rifle, with the initial forging and machining process, which was so revolutionary in the creation of the AK-47, almost lost from the story.

The milled receiver AK-47 (AK-55) was still manufactured when the first batch of the modernised, stamped-receiver AKM-63s were completed. From 1963 with the introduction of the AKM-63 with its sheet metal receiver, all parts were made by FEG. The new model’s specifications were nearly the same as the old AK-55, but manufacturing was more straightforward and efficient. The old milled receiver was replaced with one made out of stamped metal sheets, and the expensive wooden furniture was eventually changed to cheaper plastic in 1964. This model was issued with a multi-function bayonet, capable of cutting live electrical wire thanks to the rubber grip. The rifle had a very unique feature in that it came as standard with a forward pistol grip, and it also had a very distinctive sheet metal hand guard.

The AKM-63 proved to be a highly functional and reliable rifle, popular with the troops. Chambered in 7.62x39mm (M43) and issued with a 30-round staggered row detachable box magazine, gas operated, and with selective fire capability it proved to be a major step in the modernisation of the Hungarian forces. With an overall length of 880mm, a barrel length of 415mm, and an empty weight 3.12kg it was absolutely in keeping with the military rifles issued worldwide at the time.

Time, of course, never stands still and the AKM-63 was replaced in 1966 by the AMD-65; this was a shortened (by 98mm) variant of the AKM-63 with a simple folding tubular butt and rubber butt plate; the butt could be folded by pressing a slotted catch under the receiver behind the rear pistol grip, and the shorter length reflected the increasing use of vehicles and especially AFVs by the Eastern Bloc Armed Forces in general. The short barrel had a distinctive large two-port compensator, and the early pattern wood pistol grips were replaced later with dark-coloured plastic ones.

So why, you might ask yourself, has someone gone to all the trouble of producing an airsoft replica of what was essentially a rather obscure AK variant that actually had a remarkably short service life? The answer to this lies in LCT Airsoft themselves. Little known to many UK airsofters until quite recently, LCT actually has vast technical engineering experience as well as threeyears as an OEM and ODM. ‘Li Cheng Technique Business Company’ was established in 2004 with the brand ‘LCT Airsoft’ and they’ve been quietly making some superb airsoft replicas since then, and their extensive range of ‘Soviet’ rifles, carbines and SMGs has to be seen to be believed. LCT AEGs are made from a mix of steel, wood and aluminium; they are extremely well-finished with a hard-wearing coating that is more resistant to wear and tear than normal airsoft AKs, with excellent and realistic colour matching, and in fact many high-end AKs from other manufacturers are actually originally made by LCT!

Although they do make some rather tasty M4 and M60 electric replicas, if you’re looking for an airsoft AK then you really need go no further than LCT, as in their range they have nearly 40 models! And this is before you even take into account that they also offer RPK, VAL, Vintorez, and Bizon variants and are currently well advanced in producing a new RPD replica…

And although they are well-priced (Fire Support are offering the LCKM-63 on test here for just £215!) they are of absolutely top-quality. The LCT LCKM-63 AEG comes with a solid and durable metal body and barrel and benefits from real wood pistol grips fore and aft, and a wood butt. Everything is put together very well indeed and there are absolutely no creaks, groans or wobbles apparent anywhere.

Internally, things are equally as good; there’s a tried and tested V3 gearbox, a ribbed aluminium cylinder, aluminium cylinder head with double O-ring, a plastic nozzle with O-ring, polycarbonate piston with steel teeth, and an aluminium piston head. This sounds all very well, and in actual fact it is, as these components will give you superior performance from the get go!

Performance-wise, the LCKM-63 is no slouch either. The AEG comes with a winding 600 BB High Capacity magazine which is also of full metal construction; I did try it with other AK-47 and AK-74 magazines of different capacities and all fed very well with no jams or misfeeds. A 7.4v LiPo is recommended, and this type of battery fits easily into the butt; one nice little feature here is that LCT incorporate a spring-loaded ‘trapdoor’ into the metal buttplate, which means with a little careful placement of the wiring you can charge your battery in-situ.

There are swivels fore and aft should you wish to fit a sling, and the control layout of the LCT AK is much the same as every other one on the market. The charging handle cover hides a traditional sliding hop-up adjuster, and the safety lever has three positions; topmost is ‘safe’, middle is ‘auto’, and the lowest setting is ‘semi-auto’, just like the real thing. For a rifle that first saw service in the 1960s, the placement of the foregrip, which is essentially just a reversed pistol grip, gives the ‘63’ a surprisingly modern ‘feel’.

With the magazine fully loaded and wound, and a charged NUPROL LiPo fitted it was time to run the ‘63’ through the chrono, and the result was a very highly consistent and site-friendly 0.92 joule/315fps using .20g BBs; rate of fire was also pleasantly ‘AK’, chugging along nicely.

With a relatively long 435mm inner barrel I thought the LCKM-63 might have some legs in relation to both range and accuracy, and once the hop and the iron sights were dialled in that indeed proved to be the case. I witnessed an absolutely flat BB trajectory out to the extreme of the 30-metre range I was testing on, and I believe that this trajectory would remain the same for a good deal further out. At 30-metres prone I was able to easily hit a dinner platesized target with each and every BB sent; none too shabby straight out of the box!

I’ve always personally fancied an AMD- 65 to add to my collection, and as the LCT replica of that shares many of the components of the LCKM-63 tested I have to say that the later model is very quickly heading to the top of my ‘must have’ list, given the quality and performance of the review sample. If you like a bit of an ‘old school’ AK with woodwork that’s just a bit different, and at a great price, then you really should get your hands on an LCKM-63 from LCT Airsoft though.