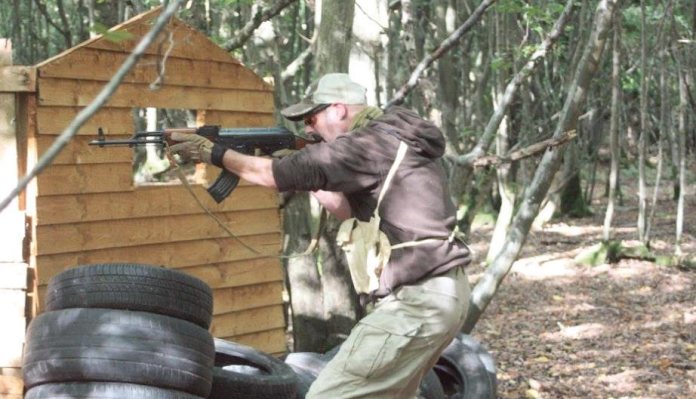 On numerous occasions in my reviews I have used the word ‘iconic’ to describe an airsoft replica, and perhaps I do so too glibly. When it comes to one particular firearm though there is absolutely no doubt that someone with even the most fleeting of interest in firearms will immediately recognise the distinctive angular, some might even say ‘agricultural’ outline of the Automat Kalashnikova or ‘AK’ 47.

Wherever you look at the moment, for the right or the wrong reasons, you will see the AK on news reports and on the front page of most daily newspapers.

From Vietnam in the 1960s, to the Middle East of the current day, the AK will be the weapon of choice for many. And that’s not just the ‘bad guys’, as the AK will quite often be the weapon issued in theatre to private military contractors or ‘PMCs’.

The AK has been available in vast numbers worldwide since its introduction in 1947, hence the nomenclature. ‘Introduction’ is strictly not the correct word though, as it was only prototypes with the first serial numbers that entered service in that year. It was not until 1948 that the Soviet Army started receiving this remarkable rifle as general issue, but since that date, in one iteration or another, the Kalashnikov ‘machine’ has continued to roll.

Towards the end of WWII, the Russians had managed to capture various models of the German ‘Sturmgewehr’, a revolutionary design that had transformed the capabilities of their foes on the Eastern Front.

The ‘StG’ made use of an intermediate cartridge heavier than that of a submachine gun, but lighter than that of a traditional bolt-action rifle. Looking to the success the Germans were achieving, with both the cartridge and the weapons platform utilising it, the Soviets decided that they needed to look in the same direction. In March 1944, the new 7.62×39mm M43 intermediate cartridge went into mass production, and at the same time the Soviet planners decided that a whole range of new small arms should use it, including a semi-automatic carbine, a fully automatic rifle, and a light machine gun. Design contests for these new weapons began in earnest in 1944.

Numerous Russian firearms designers immediately jumped on board with the project, including seasoned veterans of the industry, such as Tokarev, the inventor of the army pistol already tried and tested in service. It was a relatively new designer that came to the fore however, a former army officer who would give his name to the rifle that would become a symbol to communist inspired nationalists worldwide; that man was Mikhail Kalashnikov.

Whilst wounded and convalescing, the young officer had tinkered with plans for various types of infantry weapon, but none of his designs were adopted. It was not until the later 1940s that his designs were given a serious look, and it was not until the trials of 1946 that his design team in Kovrov submitted an entry to the military for appraisal. It was a gas-operated rifle, which had a breech-block mechanism similar to Kalashnikov’s older designs but that fed from a distinctive curved 30-round magazine. Kalashnikov’s rifles, AK-1 and 2, proved to be reliable and the weapon was accepted to a second round of trials along with designs by Dementyev and Bulkin. In late 1946, during testing, Aleksandr Zaitsev, an assistant to Kalashnikov, suggested a major redesign of the AK-1, already impressive given its milled receiver, to improve reliability. Although initially sceptical, Zaitsev managed to persuade Kalashnikov, and changes were made. The new rifle proved to be simple and reliable under a wide range of conditions, with convenient handling characteristics; prototypes with serial numbers one to three were completed in November 1947.

Production of the first army trial series began in early 1948 at the Izhevsk factory and in 1949 it was adopted by the Soviet Army as ‘7.62 mm Kalashnikov Assault Rifle’. And so began the legend of the AK.

Used around the world, and produced under licence by many communist states, the AK47 proved to be a formidable and highly effective battlefield rifle. Unbelievably rugged and durable it was said that the AK would fire even after having been buried in mud for considerable periods.

Incredibly easy to maintain, it was the ideal weapon for poorly trained indigenous forces, as well as for trained soldiers.

That said, anyone who has ever fired a real AK will tell you that the recoil is also somewhat formidable too, and the rifle hard to control, unless you really put your mind to it. Once controlled though, it is accurate out to 400-metres, which is more than sufficient for most infantrymen. Changing methods of deployment meant that Soviet troops were delivered to the battlefield in vehicles and the AK went through further development to include models with an under-folding, skeletonised stock, which dramatically reduced the length of the rifle when used by paratroopers or motorised infantry. The safety mechanism also differed from the traditional ‘safe, semi, auto’ format, becoming instead ‘safe, auto, semi’. This at first seems unusual but given the Soviet preference to engage the enemy with overwhelming force, utilising fully automatic fire, perhaps it is not actually so.

The AK47 is undoubtedly a fine combat weapon, and initial models were actually very, very well made. Unfortunately, this also meant it was expensive and involved to produce, so eventually changes were made and the AKM (Modernised) entered service, followed in time by the AK74, which also heralded a change in calibre. The AK-74M is now the main service rifle in use with the Russian Federation forces these days, and the days of perfectly mated wood and metal have pretty much long gone, with new polymer and glass-filled polyamides helping to save those forests! The AK- 74M (M standing for Modernizirovanniy or Modernised) is an improved variant of the AK-74 assault rifle that offers more versatility compared to its predecessor.

The AK-74M can happily use existing 5.45 AK 30, 5.45 AK 45 and 5.45 AK Drum magazines. The 30-round black magazine is the current-production magazine for the AK-74M, and is made of lightweight high-strength polymer. The lightweight 5.45x39mm magazine significantly reduces the load for the soldiers, and crucially allows the user to carry additional rounds for the same weight in comparison with the earlier magazines of the AK family.

As well as the Russian Federation, the AK-74M is also used by the armed forces of Afghanistan, Armenia, Belarus, Bulgaria, Georgia, Jordan, Kazakhstan, Kyrgyzstan, Moldova, Mongolia, North Korea, Tajikistan, Turkmenistan, Ukraine and Uzbekistan, but if you look across the Kalashnikov ‘family tree’ that list becomes significantly longer, and in my mind, this makes it one of the most versatile airsoft replicas out there!

If you’re a fan of the AK, like me, or simply want something different from the slew of ‘M4 variants’ out there, then there has actually never been a better time to own an airsoft AK. With newer companies like KWA, LCT, E&L, and GHK now making some righteous replicas, and all the older manufacturers like CYMA, Classic Army, ICS, and Tokyo Marui upgrading their offerings, the choice of ‘Airsoft AK’ has never been wider. If you want anything from a standard AEG, through gas blowbacks, to new and innovative ‘recoil’ models, they are all there for the taking, but I’ve chosen models that are my personal ‘Top Picks’ from a line-up of exceptional replicas! Just one this month, the rest in the May issue.

Although they’re pretty quiet, CYMA are one of the biggest manufacturers of RIFs and airsoft products in the world. Based in China, there are actually two separate CYMA factories, with one making ‘budget’ guns and the other making more expensive and advanced models. You really don’t hear a lot direct from CYMA themselves about new models and new advances, instead they leave their products to speak for themselves, and their AKs most certainly do this!

This super CYMA AK has all the usual benefits of other CYMA models, including steel and aluminium construction, and internals that are renowned for their reliability, but this is truly in a different league when it comes to the ‘Magpul’ furniture! With an ‘MOE’ stock and ‘Zhukov’ style handguards, it also has an ‘MOE’ style pistol grip, and comes with a 500BB polymer magazine that closely resembles a PMAG. Add to this a fully railed and hinged top cover, and a ‘DRAKON’ style flash hider and what you end up with is a superb, modern looking AEG for not much more than a decent GBB pistol!

This is a thoroughly modern airsoft rifle that costs around £200, so what you’re getting is a great bit of kit that looks utterly superb, feels so solid that you could use it to hammer nails, and is perfectly adequate in terms of performance. If, like me, you’re in need of a ‘modern AK’ then the new CYMA models are most definitely worth a look, and are freely available from most good airsoft stockists.