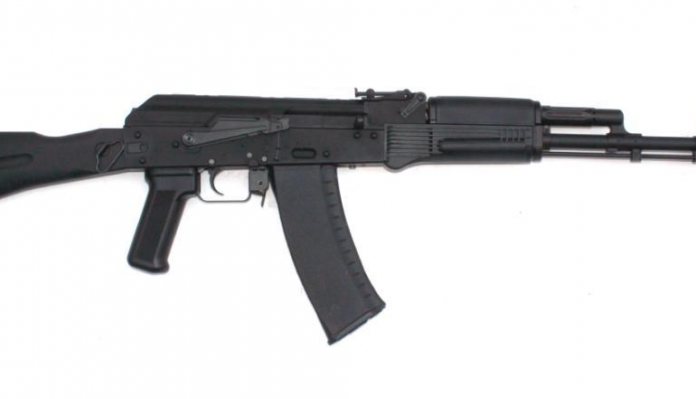 In 1973, a design competition was initiated in The Soviet Union to find a fully automatic carbine; the Russians had no doubt seen the effectiveness of the XM177 variants in use with US Special Forces in Vietnam and made the decision that their specialist units should have access to something similar. The size reduction based on the AK74S as whole resulted in a very small, relatively lightweight, effective and highly manoeuvrable weapon, but one that needed upmost respect from the user. Such a short carbine which makes use of the 5.45mm round used in the full-size rifles is a bit of a handful to say the least, and the extreme muzzle blast and recoil soon earned the AKS74U the nickname of ‘suchka’ or ‘little bitch!

E&L Airsoft have teamed up with partners known for making very high-quality internal parts for the Japanese market, so the internals are interchangeable with others out there. Inside, there’s a Type 3 gearbox employing Japanese technology with super tensile pistons, tappet plates, and high torque motor. Not only are the E&Ls beautifully finished externally, but inside things are equally precise. You also get the side mount point, where you can add a side scope mount as standard on this model too. With the conical flash hider and booster, along with the RIS at the sharp end, and the folding stock at the other, it almost has that factory-fresh feel about it, and it arrives very lightly oiled, so you even get ‘that smell’; E&L go as far as supplying a green plastic oil bottle as part of the deal, which indicates to me that the externals will need to be kept maintained. In addition to all the usual features, the E&L is neatly finished off with a ‘SAW’ style pistol grip.

With a retail price around £300, this is one hell of a performer; okay, I am biased because I love the SU so much as a model, but after owning many, I have to tell you that this is genuinely one of the very best AEG versions I’ve ever encountered. The externals are absolutely spot on, the internals are the very best they can be, and the performance is first rate.

If you fancy something a little more ‘classic’ the main variant of the AKM was the AKMS (S for Skladnoy or Folding), which was equipped with an underfolding metal shoulder stock in place of the fixed wooden stock. The metal stock of the AKMS is somewhat different from the folding stock of the previous AKS47 model, as it has a modified locking mechanism, which locks both support arms of the AKMS stock instead of just one (left arm) as in the AKS47 folding model. It is also made of riveted steel pressings, instead of the milled versions of most AKS47s. The AKMS was designed especially for use by paratroopers, as the folding stock permitted more space for other equipment when jumping from a plane and then landing.

LCT Airsoft offer products that are not only cost effective, but also reliable in performance and solid in build quality. The LCT AK variants are ultimately the next evolution of the AEG. The AKMS features the same high-quality external build expected of LCT products, utilising 9mm bearings, a 22,000rpm motor, a brass, chrome-plated cylinder, and both the cylinder and piston heads are CNC Aluminium Alloy. The wiring throughout is high quality 18AWG, which will give good, reliable long-term performance.

The LCT LCKMS is available for sale at an extremely reasonable £230.00 for the rifle with a standard steel 130BB magazine, and £13-15.00 will get you spare Mid or HiCap mags; this is a lot of RIF for your money, and one that regularly gets used by me!

As I stated earlier, the AK74M is in current ‘real world use’ by the Russian Federation, so if you’re planning a ‘modern Russian’ loadout, then this could be the one for you! ‘ERG’ standing for Electronic Recoil Gun. Although there have been numerous ‘electronic blowback’ rifles and carbines put to market, true felt recoil was never really achieved, and due to the mechanical nature of the blowback systems involved, they would often end up stripping pistons due to their ‘drag back’ nature. KWA, though probably best known for their gas offerings, offer their Kinetic Feedback System, which is housed inside the buffer tube of the rifle. Simply put, each time you pull the trigger the gearbox spring engages the Kinetic Feedback System inside the buffer tube, simulating recoil; the KWA does not feature a moving fake bolt, springs or mechanical connections as such, which bodes well for the longevity of the system.

The magazine that comes with the rifle is also a cracking bit of work, in that you can change it swiftly from 30 BB capacity to 60 simply by moving a sliding switch on the baseplate; this makes it incredibly versatile for both MilSim and general skirmish use. The AK ERG is available for sale at £339.95 for the rifle and £44.95 for a box of three spare mags (you can use other AK mags but you lose the last round cut-off feature); do bear in mind that these prices could fluctuate given what’s going on with exchange rates right now, but all in all this is one superb AEG!

Every year, airsoft manufacturers unveil something new and fresh, something that brings added realism of our airsoft shooting experience! In the last couple of years, this has been all about giving our rifles and carbines more ‘felt recoil’ and industry veterans Tokyo Marui have once again been at the very forefront of this drive.

To sum things up, externally, the TM benefits from a full metal receiver, faux-wood but real-looking handguards, a metal sidefolding stock, fully adjustable front and rear sights, the correct AK 74 pistol grip (albeit slightly oversized as there’s a motor in there!) and the distinctive steel AK 74 muzzle brake. The finish of the AK is superb throughout to be honest, and it is absolutely solid as a rock, with not a wobble or a creak apparent anywhere.

It comes with a single 74BB ‘AK 74 Polymer’ Hi-Cap magazine, which is finished in ‘Bakelite brown’. The magazine is bespoke to the Tokyo Marui Recoil AK. So this is one small downside to it as a model – the ‘recoil’ is definitely NOT compatible with other AK47 Series magazines! If you fancy fitting an optic to your TM though, then one additional feature that comes as standard is an AK sight mount on the left-hand side of the receiver; you’ll need to buy the correct sight rail to clamp to this though, and please note that if you fit the rail then you can’t close the folding stock!

With a great feel, superlative parts and build-quality, and excellent performance out of the box, but with a slightly steep asking price of £428.00 this is an absolutely cracking bit of kit.

The WE ‘AK PMC’ is actually based on a gas blowback AKM and it comes fitted with the ridged top cover and the distinctive muzzle brake. A lustrous black full metal throughout this is a sturdy beast, feeling solid and durable in the hands. Where this differs immediately from the standard AKM is the furniture fitted. Many friends who have served overseas in a private security capacity have told me that when they have been issued their firearm ‘in country’ it is often an AK of one type or another. Many in the past have carried out with them their own optics and accessories to further enhance operation and control of the rifle. The ‘PMC’ reflects that in every way and comes ready fitted with an M4 style buffer tube and ‘crane’ style stock to the rear. This gives great versatility in getting the replica to ‘fit you’. There is also an ambidextrous quick detach sling swivel included in this setup. There are standard iron sights fitted, adjustable for windage and elevation, but at the front end rather than the woodwork you might expect to find on an AK there is a ‘polymer’ setup similar to that offered by US company TAPCO, which offers a quad handguard with rail sections for accessories top, bottom, and both sides. The top rail actually extends forward of the handguard itself for the easy fitting of larger optics should you desire.

If your style of play is more ‘MilSim’ than ‘Spray and Pray’ then this fabulously put together replica should be high on your list of primaries to consider, especially if you favour an OPFOR or ‘contractor’ loadout; as it happens I was so impressed with the ‘AK PMC’ that I’ve been using one myself for a couple of years now, and have a second that is fitted out with classic woodwork! As with all gas rifles, the cost of additional magazines is going to put up the overall price of things, but in my opinion that extra spend would be well worth it, especially if you make your purchases over time as I do. Expect to pay around £390 for the ‘AK PMC’. Whether you buy this replica to play airsoft with, to train with, or to use as part of a living history display, you can be sure that your money will be well spent!
https://www.gunmart.net/admin.php?/cp/addons/settings/filepicker/modal&directories=5&directory=5&type=list&hasFilters=1&hasUpload=1
My sincere thanks go to www.firesupport. co.uk for the LCT and Tokyo Marui test models, and to www.nuprol. com for the E&L and WE models and the KWA courtesy of www.jtaccustom.co.uk