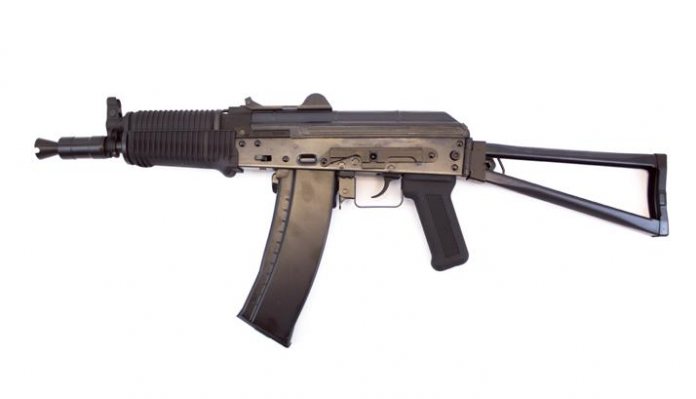 The Avtomat Kalashnikova, or simply the AK to most people, is probably amongst the most instantly recognisable military rifles in the world today and has turned up in one form or another in virtually every modern conflict since its inception. The original AK47 design has long been superseded, but even the most up to date variants still retain that distinctive silhouette.

AK replicas are re-gaining popularity, as a decent electric or gas version can cover off so many different types of airsoft scenario. If you’re into your ‘Namsoft’, then a simple woodfurnitured AK will suit, whether you’re playing US or VC (although if fairness you’d really want a Type 56 if you were doing it right!), and the same can be said for Cold War-themed games if you’re on the OPFOR. Even in modern day ‘MilSim’ scenarios, if you’re playing the ‘Bad Guy’, then in my opinion a nice, classic AK is the perfect choice of rifle to use.

In airsoft terms, the different AK variants are beginning to seriously chip away at the hordes of AR-style replicas, with many manufacturers having at least one, or even more, model in the range.

Like the AR, there is an ever-increasing choice of accessories for the AK, although many purists, myself included, will resort to the mantra “Nyet, rifle is fine!” as soon as anyone suggests that an AK needs a rail system or fancy ‘bolt-on’ aftermarket parts. In fact, I’d go as far as saying that many of us are looking at the very latest models and actually retro-fitting them with original woodwork to take the modern ‘PMC’ style replicas back to their pure form, and there are numerous wood kits like those from RA-TECH and W&S Airsoft (you can check out both wood kit manufacturers by simply visiting www.milspecsolutions. co.uk) now available specifically for different manufacturer’s offerings!

If you pay a visit to http://www.gunmart. net/gun_review/ak47_pmc you’ll see the review I did a while back on the PMC gas blowback AK offered by WE Airsoft Europe (WEAE), and very impressed I was with it too. The WEAE open bolt system, in my opinion, is reliable and one of the best out of the box and is very easy to work with as, in the main, the replica is as simple as the real deal. There’s not a whole heap that can go wrong with the rifle itself and as long as you keep up to scratch with your cleaning and maintenance, especially in relation to the gas magazines, just like a real AK, it will stand up to all the abuse you can throw at it. The subject of my review this month works on the same internal gas blowback system and shares all the sturdiness and reliability of the longer rifle; I specifically use the word longer’, as at just 500mm with the side-folding stock closed, the AK74UN (or AKS 74U) is not that much bigger than an MP5!

The original AK47, designed by Mikhail Kalashnikov in the late 1940s, has been in service since its initial adoption by select units of the Soviet Army in 1948. In 1959, the AKM, Avtomat Kalashnikova Modernizirovanniy, or modernised AK, was introduced and this model is probably the most ubiquitous variant of the entire AK series and it has been adopted by most member states of the former Warsaw Pact and many African and Asian allies as well; it has been widely exported and produced in many other countries, although in Russia the production of these rifles was carried out at both the Tula Arms Plant and Izhmash.

The AK74 was developed in the early 1970s, again by Mikhail Kalashnikov, as the replacement for the earlier AKM. It uses a smaller 5.45x39mm cartridge, replacing the 7.62x39mm chambering of earlier Kalashnikov rifles. The rifle first saw service with Soviet forces in Afghanistan during the 1980s and continues to be used by the majority of countries of the former USSR. Licensed copies have also been manufactured in Bulgaria, East Germany and Romania. Besides former Soviet republics and Eastern European countries, Mongolia, North Korean Special Forces, and Vietnamese People’s Naval infantry use AK74s, so once again it’s a rifle that ticks many, many boxes for the airsofter.

The AKS74 (‘S’ standing for Skladnoy, or Folding), was developed in tandem with the full-stock version of the AK74 and is equipped with a side-folding metal stock; it was developed primarily for use by airborne infantry. Like many designers though, Kalashnikov had the idea to make an even shorter carbine variant, almost a submachine gun, that retained the rifle chambering for commonality of use in relation to ammunition and spare parts.

In 1973, a design competition was initiated in The Soviet Union to find a fully automatic carbine; the Russians had no doubt seen the effectiveness of the XM177E1/E2 in use with US Special Forces in Vietnam and made the decision that their specialist units should have access to something similar. Kalashnikov was already quite a long way down the development path with his own design and although a number of other designers put forward competitors, it was the AKS74U (‘U’ for Ukorochenniy, or Shortened) that was adopted.

Initially the carbine was issued to a few very select units, but by 1979 it was far more widespread, being fielded by Special Forces, airborne infantry, rear-echelon support units and vehicle and helicopter crews.

The carbine’s compact size was achieved by using a side-folding stock exactly the same as that used on the AKS74 and a short 206.5 mm (8.1 inch) barrel with a re-designed gas piston operating rod. Due to this re-design, the cyclic rate of fire rose to a hefty 700 rounds per minute, so in order to stabilise rounds, the barrel’s twist rate was increased to adapt the AKS74U for muzzle velocities in excess of 720m/s (2362fps). A new gas block was installed at the muzzle end of the barrel, with a muzzle booster and conical flash hider, which gave the 74U a very distinctive appearance.

The size reduction as a whole resulted in a very small, relatively lightweight, effective and highly manouverable weapon, but one that needed upmost respect from the user. Such a short carbine which makes use of the 5.45mm round used in the full size rifles is a bit of a handful to say the least, and the extreme muzzle blast and recoil soon earned the AKS74U the nickname of “suchka” or “little bitch”!

As with all their ‘historically themed’ replicas, WEAE have once again got it spot on with their UN! In terms of the numbers, a real 74U weighs in at 2.71kg unloaded whilst the replica is 2.65kg. The real length is 735mm/490mm with the stock folded, and the replica is spot on at 735mm/500mm!

The replica is made of good-quality metal throughout, with only the pistol grip and the furniture being of black plastic; once again 100% accurate to the most recently manufactured 74Us in the real world. A real AK74 magazine weighs in loaded at about 300g, with the replica just over 400g but of course the WEAE version contains the gas reservoir, valves, and the last-round cut off mechanism, so this slight discrepancy is totally acceptable; the gas magazine is a thirty rounder though, just like the real one.

In terms of operation, the replica mimics the real deal completely, so if you’re buying this as a training tool then it’s again spot on. The fire selector lever, a ‘modernised’ tactical style lever in the case of the UN, is found on the right-hand side above the trigger and has three settings. The uppermost position is safe, mid is full-auto and lowest is single shot; rumour has it that that this slightly odd setup was in fact a designlevel decision as it stopped a panicked user going straight into full-auto mode!

The magazine, like all AK magazines, is seated into the well front lip first, and if you’ve ever used any AK variant this will be very familiar to you; WEAE have added a neat little feature in terms of a guide-plate alongside the magwell on the right hand side. The cocking handle sits above the magwell again on the right; please note that the UN cannot be cocked with the lever on safe, and don’t try to force it as you could cause damage!

In action, the UN is a right cracker, quite literally that is! The replica comes with a loading tool which easily lets you charge the magazine with 30 BBs. As with most gas replicas the magazine is filled via a valve on the base, and a full fill should give you two mags worth depending on the weather. With the magazine inserted snugly into the gun, the safety lever is moved to one of the fire settings and the UN cocks with a solid “clunk” as everything slides into battery; the selector lever can now be moved back to safe.

Tested through my Xcortech chrono using NUPROL 3.0 gas and .20g BBs, the UN came in with a very consistent and siteusable 342fps, which once again shows that WEAE have gone to great lengths to ensure that the models they hold in stock are UK compliant. If you order a UN from overseas though (can’t see why you would now stock is held by WEAE in the UK!) do ensure that the power is within safe and acceptable site limits, as some web retailers are quoting their stock at 400fps+! In terms of accuracy, like the longer PMC, the little UN is superb, especially given the shorter inner barrel; hitting a BB bottle at 25 metres was easily achieved with the standard iron sights, and BBs were still travelling out flat and straight to double that distance once the rotary hop was set correctly.

The main thing I love most about the AK74UN though is how distinctive it sounds. On single shot it goes off with a goodly “crack”, but on full-auto once again it has that unusual ‘Kalash Clack’; somehow the rate of fire is slower than that of the WEAE M4 so that the two replicas sound completely different. If different sides were using gas M4s and gas AKs in a MilSim scenario I kid you not when I say that you could actually distinguish one for another which would just add to the immersion of a scenario!

At the end of the day, I like the UN in every way possible! It’s a stunning replica, true in size and weight. It’s incredibly solidly put together and operates very well indeed. Although, personally, I won’t make use of it, it does come with the rail for the correct AK sight mount pre-fitted on the left-hand side of the receiver, which is just a nice added bonus.

Priced around £320, this is a lot of gun for your money, and the magazines, either AK74-style plastic or classic AK47-style metal, aren’t stupidly priced for once.

If you asked me if I would own an AK74UN myself I’d just say to you “I already do” and I think that speaks for itself; mine has been retro’d with real wood furniture, a webbing sling and has the magazine shell re-coloured to ‘Bakelite Brown’ and it’s one of my favourite replicas. I can’t recommend the AK74UN from WE Airsoft Europe to you more highly!