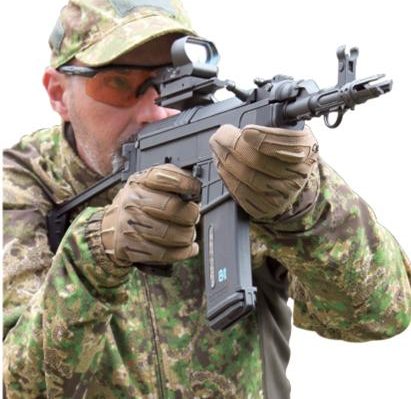 When you think of Cold War rifles inevitably and undoubtedly you will think of the trinity of the M16, the FN FAL/SLR, and the AK47; however there was another Eastern Bloc weapon that was fielded by the Czech Army not just during the 60s, 70s and 80s but onwards into the conflicts in Iraq and Afghanistan: the SA Vz58.

The Samopal Vz58 began its long life on the drawing board back in the mid-1950s, the brainchild of chief engineer Jiri Cermak working at the Konstrukta Brno facility in the city of Brno. Whilst every other country behind the Iron Curtain had to fall in line with the Soviet Union and adopt an indigenously produced AK-47 variant, the Czechs’ long history of firearms production gave them a way to take things in a different direction. They had to adopt the 7.62x39 cartridge, but were allowed to develop their own rifle design based around a commonality of ammunition.

The Vz58 was produced in three main variants: the standard 58 P (Pechotni or infantry) model with a fixed butt stock made of either wood, or later a synthetic; the 58 V (Vysadkovy or airborne), featuring a side-folding metal shoulder stock, folded to the right side; and the Vz58 Pi (Pechotnis infracervenym zamerovacem or infantry with infrared sight), which was similar to the 58 P but included a receivermounted dovetail bracket installed on the left side of the receiver which was used to attach an NSP2 night sight; it also had a detachable folding bipod and an enlarged conical flash suppressor.

Although the Vz58 is somewhat similar in appearance to the classic AK47, especially in the full-stock version, many actually believe that the Czech alternative is actually the better rifle of the two, and given the length of service this may well have some truth to it. Whilst the AK went through numerous changes and iterations, the Vz58 remained pretty much identical to the first models produced in 1958. Internally and externally though there were subtle but important differences between the two. The Vz58 has a short stroke gas piston, while the AK47 has a long stroke gas piston. In basic terms, this means that the Vz58’s operating rod is not attached to the bolt carrier, while the AK-47’s is. Also, the AK has a traditional hammer, while the Vz58 is striker fired.

Externally the AK can be found with stamped and milled-steel receivers, the Vz58’s receiver is milled completely from steel; this results in a lighter rifle. The Vz58’s aluminium magazines are also significantly lighter than the AK’s steel magazines. It’s also said that the trigger mechanism of the Vz58 is very, very straightforward, once again better than that of the AK, and that the controls are far more simple to use as well; the fire selector of the Czech rifle is positioned on the righthand side directly above the trigger and in ‘safe’ mode points directly downwards, meaning that if you have your finger off the trigger running along the receiver you can immediately tell if you have the safety on.

The Vz58 is certainly a robust and workmanlike rifle; let’s remember that it entered service in 1958 and over a period of 25 years, over 920,000 had been produced, fielded by the armed forces of Czechoslovakia, Cuba and several other Asian and African nations. Even when Czechoslovakia peacefully split into the Czech Republic and Slovakia on 1st January 1993 the Samopal Vz58 was still the issued service rifle, and pictures show them being used by Czech troops as part of the war on terror; it was not to be until 2011 that the Czech army started replacing Vz58 with CZ- 805 BREN. The CZ-805 has now replaced the Vz58 as the issued service rifle but even today the venerable Cold War warrior soldiers on in the hands of reservists.

Ares was the Greek mythological God of War, so what an inspired choice for an airsoft company name this is! ARES is by no means a new player in the airsoft manufacturing world, and their range is pretty extensive and comprehensive these days, covering historical models from WWII through to the very latest battlefield rifles. They offer high-quality AEGs, gas and spring powered sniper rifles, grenade launchers and a whole raft of accessories and upgrade parts.

Like any other good airsoft manufacturer they work very closely with the ‘real steel’ firearm companies, often entering into licence agreements so that their replicas are correct in every respect even down to realistic trademarks; it’s great from a collectors perspective that you know what you’re going to get is as close to real life as possible and I can certainly see why ARES replicas are sought after by living history group members.

And so it is with the SA Vz58, certainly in the ‘long’ version; yup, ARES have actually come to market with two different Vz58 models, a ‘long’ based on the Vz58 V paratrooper version and a ‘short’ which actually doesn’t officially feature in the real-world military line up, but is based on the Czech Small Arms produced .223 Remington Vz58 Sporter model.

Both models are absolute crackers externally with side-folding skeleton stocks; everything that should be metal is metal, and a very good quality to boot, with just the ergonomic pistol grip and forestock being plastic. The replicas are put together with meticulous care and the fit and finish is as good as anything I’ve come across; just like the real thing it’s a solid, workmanlike bit of kit.

Actually, the best thing about the ARES Vz58 is that it resembles the real steel version in every way possible. The features you find on the replica are what you’d find on the real one. For example the folding stock is stiff to operate, but once it is in position there is no wobble at all, unlike some AK models I’ve tried in the past. The bent trigger guard is unique, but was purposely placed there making it easier for right-handed people to use their left hand to reload.

Internally the Vz58 uses a proprietary EFCS gearbox along with a high-torque motor, although I’ve a feeling that these have some heritage from the AMOEBA model that ARES launched some time ago; that said it makes the Vz58 incredibly responsive, even on a 7.4V LiPo. The trigger pull is very light and crisp meaning you can pull the trigger as quickly as you move your finger! I also have to say that I love the placement of the hop up adjustment wheel, which is a unique design and certainly not one I’ve personally come across before. Once you pull back the charging handle the top slide moves to the rear and there, flat on top, is the wheel; with a very audible click on each increment of adjustment, turning it clockwise will increase the hop, anti-clock to decrease. Battery placement differs between the two models, as you might imagine, given that the ‘short’ model essentially has no foregrip! In the long version you can easily fit an 11.1V LiPo battery into the foregrip simply by removing the large retained pin at the top rear; the ‘short’ however houses the battery under the dust cover positioned upper rear, much like the old AK system, and you’ll need to use a 7.4V LiPo battery here given the space constraints.

Once again the magazine looks very similar to the ribbed AK version but beware here as they are actually totally different in terms of how they fit, with lips and magazine catch that are chalk and cheese; if you already have AK magazines, they are not going to fit the Vz58, but there is a solution to this which I’ll come onto in a moment. Loaded up with 160 BBs and with a battery fitted, both the Vz58 models are accurate, with the ‘short’ model being slightly outranged by the ‘long’ as you would expect. The ‘short’ seems just perfect for CQB with the power of 320fps using .20g NUPROL BBs, whilst the ‘long’ is ideal for outdoor games with longer engagement distances; do be aware though that the ‘long’ I had for testing registered through the chrono at a surprisingly warm 387fps, although I’m certain that Redwolf (who supplied both test guns) will undoubtedly have an answer to this up their sleeves.

Now, I said that I would come back to the magazine issue, and so I shall. As I mentioned earlier the real world compact Sporter uses the .223 Remington cartridge, and I have to say that ARES have really done their homework here in that £31.95 will buy you a magwell converter that lets you use pretty much any type of M4 magazine in the Vz58. This is easily installed (it took me about five minutes) and means that, if you don’t want to buy another whole set of dedicated magazines, you can pretty much use anything you like from your M4 pile; it’s a very neat and thoughtful accessory.

Like any airsoft replica, of course, there are all sorts of other bits and pieces you can bolt on to the basic rifle, and in fact ARES are past masters when it comes to this. Whilst the iron sights that come fitted as standard are more than acceptable, the bodies of both models are pre-drilled to accept a Side Scope Mount Plate which costs £15.95, and onto this you can slide a Side Scope Mount Rail costing £52.95; the latter has a railed top so that you can fit any sight which takes your fancy. ARES do show front rails and railed dust covers on their website, along with other Vz58 specific accessories, but those have yet to come into the UK at the time of writing.

I’m sure that by now some of the more eagleeyed of you will have recognised the Vz58 ‘short’ as the weapon being used by a certain Section 20 operative in the TV series, Strike Back, and you’d be right. I can see now why ARES have made sure that the magwell adaptor and sight rail have hit the UK at the same time as the replicas, as that is how Sgt Michael Stonebridge has his set-up in Season 4; add a suppressor, a taclite, and a Comp M4 sight on top and you’re good to go when it comes to saving the world in your breakfast-time! If you want to keep things a little more military though there are numerous shops out there selling Czech 95 Model camo clothing and equipment, and in fact a quick look on www.miltary1st.co.uk brought up all the basic gear you’d need to embark on a 601st Special Forces Group project; throw in a CZ75 pistol and the right attitude and you’d be set, and that’s certainly a different look than you’d regularly see!

ARES for once have really brought something fresh to the airsoft table, and the replicas are pretty well priced too; the ‘short’ will set you back £262.95 and the ‘long’ just £270.95, which to me seem pretty reasonable for something that is very different and oozes quality. ARES also have a great reputation for reliability so, overall, it’s a very neat package, and if you fancy being just a little different to the herd then the Vz58 could very well be the replica for you! For more information or to buy your very own ARES Vz58 please visit http://uk.redwolfairsoft.com