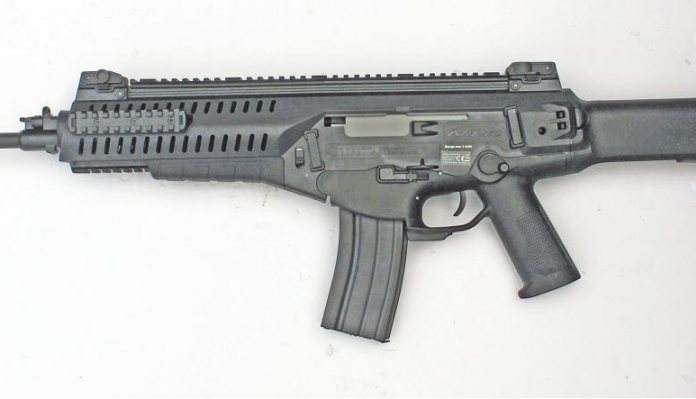 Beretta is a name that is known throughout the world of shooting, from their mighty clay-busting shotguns, through sporting rifles, to out and out fighting machines, and bizarrely it’s in the military world where Beretta started.

In the modern military and tactical world, most of us are aware of the Beretta M92 pistol that served most of the US Forces during the Gulf War and the Afghanistan years, and the Model 12 sub-machinegun has served its users well over through the years; it’s a little known fact that its debut in combat came during the TET Offensive in 1968, when the Marines guarding the U.S. embassy in Saigon repelled an assault by the Viet Cong using the Beretta M12!

Bringing things bang up to date though, the ARX-160 is a modular assault rifle manufactured by Pietro Beretta S.p.A. which has been developed specifically for the Italian Armed Forces as part of their ‘Soldato Futuro’, or Future Soldier program. Between 2008 and 2014 around 30,000 ARX-160 were supplied to the Italian Army, Navy, Air Force and Special Forces and have since been used in several conflicts including Afghanistan. The current program aims to replace the older Beretta AR 70/90 as standard assault rifle for the Italian Armed Forces; the ARX160 departs from the previously issued Beretta AR70/90 on several points, as the weapon is composed of an upper and lower receiver, both manufactured mostly from polymer, and operates through a short-stroke piston system. Feeding is through STANAG magazines.

In the words of Beretta themselves: “The ARX was engineered with one purpose in mind: to be today’s best tactical rifle. It takes the concept of a modular rifle to futuristic levels, while maintaining an absolutely simple operation that make it ultra-reliable. With ambidextrous controls, easily-replaceable barrel and virtually endless possibilities for customising and accessorising, the ARX is adaptable to any firing scenario and is perfect for today’s most demanding tactical shooter.”

The ARX-160 features a constant contact/ short-stroke gas piston system that makes it feed and fire under the most unforgiving conditions. The ARX line makes the most of the newest materials, known as Beretta’s ‘techno-polymer’, and quality control systems while enhancing ergonomics, lowering maintenance requirements, and maximising user adaptability. The appearance is a smooth rifle with a middle balance point when loaded. The lightweight ‘techno-polymer’ receiver allows for reliable operation with virtually no lubricants, and to make maintenance easy and trouble-free, the rifle has no pins and can be completely disassembled in a matter of seconds with no tools at all.

This rifle was designed to be completely ambidextrous, and all the critical controls on it may be operated right- or left-handed. These include the three position safety, the magazine release, the bolt release and charging handle and the case-ejection selector, which determines whether spent brass is ejected to the right or left. The flip-up backup sights that come standard on the ARX-160 are also versatile, offering an easily-adjustable diopter system ranged from 100- to 800-yards. The barrel is also easily replaceable in seconds, making is possible to use different lengths and calibres without any tools required. Lastly, the folding stock is adjustable for length of pull at the touch of a button, using a simple and rugged telescopic construction.

The possibilities for accessorising on the ARX-160 are limited only by the user’s imagination. It comes out of the box with a full-length Picatinny rail on top, which is perfect for attaching a variety of optics and other sighting systems. It also has Picatinny rails on both sides of and under the forend, which offer countless possibilities for easily adding lighting systems and other tactical devices.

As well as the military 5.56mm and 7.62mm, and civilian .223 REM variants, Beretta also offer the ARX as a .22 LR tactical training rifle that looks, feels and handles like its full-size counterpart. The ARX160 is a rimfire version of the ARX- 160, but aside from the calibre, this .22 LR rifle is virtually identical to the centrefire version as far as operation, controls, accessorising and customising options go

The fully licenced Beretta ARX-160 from UMAREX is the first accurate recreation of this modern rifle, featuring the same control layout that makes the ARX-160 so popular in the real world. As always, I make special note that this is produced legally by the German company with the full input of the Italian one, which, in my mind, always leads to a better product; what you receive bears all the correct Beretta trademarks that you’d find on the ‘real steel’, along with an individual, unique serial number.

The attention to detail has not been left out, as just like the real ARX-160, this AEG sports ambidextrous controls, a folding stock with adjustable length of pull, a full set of rails on all sides including an uninterrupted metal rail on top, and a functional bolt stop and bolt release; unusually this is located on the base of the trigger guard, and you do need to err on the side of caution when hitting it, as it also releases the magazine! For ease of use, this AEG also utilises the same quick change barrel system that allows you to remove the outer barrel, inner barrel, and hop-up by pulling down on two tabs without any tools required for maintenance or swapping out parts.

The hop-up itself is on a spring loaded buffer to make optimal contact with the air nozzle for better contact and air seal. Using a Long Type motor, the Version 2 gearbox is slightly dated by today’s standards but works very well and is easily accessible by folding the stock and removing a plate to reveal a QD spring change system; this allows you to change out the spring without having to even remove the gearbox from the receivers.

The finish of the ARX-160 is very nice indeed as I would expect from one of UMAREX’s ELITE Series replicas, the plastic bodywork absolutely free from lines and blemishes. The styling is very ergonomic, and from the angle of the pistol grip to the sweep of the forward handguard everything feels just right. A number of friends I’ve showed the ARX-160 to have not been overly impressed with the shaping of the bodywork, but I actually quite like it; a little Italian design flair goes a long way!

In operation it’s a very smooth rifle as well. It comes as standard with a 300 BB High Capacity magazine made of metal, which feeds flawlessly; I also tried it with P and E-MAGS and both worked just fine. With the magazine filled to capacity it was off to chrono and I was pleased to see the Beretta put nicely consistent .20g Hardball BBs through at 0.85 Joule/304fps. The sliding, side-folding stock gives more than enough space for an 11.1 LiPo battery, and using this as a power source gives a crisp trigger and a very nice rate of fire too.

With a 300mm inner barrel, the ARX- 160 can hold its own against the M4 crowd with no problem; at 10-metres it happily eats up paper targets, and pushing things out to 30-metres you’ll still be hitting your targets easily and consistently. The Beretta comes with some tidy front and rear flip-up sights as standard; these are more than adequate but that massive top rail just cries out for an optic. The replica also benefits from a nice electronic recoil function, which sends the mock bolt back and forth with each shot; whilst not a true ‘recoil engine’ it’s a lovely little feature that adds to an already very neat package.

The Beretta ARX-160 is something that is a little different and unique, and as it uses STANAG magazines it’s a model that could be added to most airsofters armoury quite easily; available with black or tan furniture, at around the £260 mark it’s not going to break the bank either. The UMAREX Beretta is beautifully put together, finished to an exceptional standard, and functions superbly so what’s not to like? I think it’s time to break out the mimetico Vegetata and head out for some poligono di tiro time; prendilo!