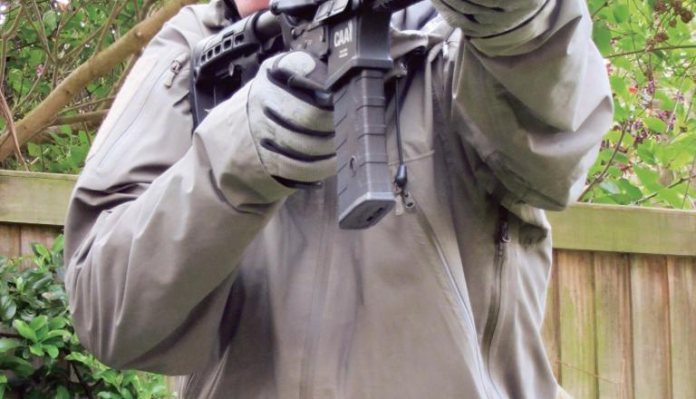 As somebody who has been reviewing airsoft replicas for a considerable time, I have to admit that I do sometimes give a little shudder when I hear from one of the manufacturers that they have a new model they would like me to take a look at, especially when asked, they use a phrase something akin to “well, it’s basically an M4, but…”.

If you have even the most perfunctory of glances at airsoft models online, or indeed even in your local shop, you’re going to see a lot, and I do mean A LOT, of ‘M4’ carbine replicas. Things do change a little when it comes to longer SPR and DMR models, but essentially they will still have pretty much the same ‘guts’ as their carbine siblings driving things along.

In one way, you can view this as a positive, as it means that there is a plethora of accessory upgrade parts, both internal and external, for the M4, as it is such a popular choice for players, but bolting aftermarket parts into and onto your AEG or GBB means that you can soon run into spending more than the gun cost in the first place.

Once upon a time, this was the way you would have to go if you wanted something even vaguely unique, but as time moves inexorably onwards, the manufacturers are adding more and more parts to ‘out of the box’ airsoft replicas than ever before.

Attending both SHOT and IWA earlier this year, the ‘race’ between the manufacturers to add more and more ‘value’ to their offerings, without having to up prices was especially noticeable; bespoke stocks and pistol grips, specialist one-off rail systems, and funky flash-hiders were on show in abundance, but I have to admit that one model caught my eye both in the USA and in Germany, and that was the ‘CAA’ version of the M4 offered by ActionSportGames (ASG) as a 7-inch, 10.5-inch, or 14.5-inch-barrelled carbine.

Founded in 2004, CAA is a longestablished designer, developer and producer of first-rate tactical accessories, optics, tools and upgrades targeting the Armed Forces, Law Enforcement and firearm enthusiasts across the globe, and have actually come up with many modern tactical accessories that have become the benchmark for the firearm industry.

“CAA outfits firearms for maximum performance in any environment. Our innovative products improve your accuracy, grip, aim, and enhance balance and performance. When equipping your firearm with our range of accessories, the user’s daily operations will become fluid and consistent.”

Their team has years of experience in the Israeli special forces. Moshe Oz is the founder and president of CAA Industries Ltd. and served for nineteen years in the most elite Special Forces units of the Israeli military and police, gaining first-hand knowledge, experience and understanding of the real operational needs of the user.

Based on his long years of experience, Moshe Oz founded CAA and went on to develop the CAA line of iconic modern tactical accessories, such as folding pistol grip/bipods for firearms and the RONI Pistol Carbine Conversion system. Coming from, and working with, the most elite military forces, CAA has evolved into an international company that supplies truly rugged and reliable mil-spec equipment for firearm enthusiasts worldwide, ranging from users operating in the most hostile environments, covert operations, through to civilian use.

In 2013, CAA made an announcement which stunned many;

“Being one of the most powerful company manufacturing the leading products in the weapon accessories and parts for real firearms, CAA is very pleased to announce that we are going in the airsoft industry, to provide you, our customer, the best airsoft products you can get in the market.”

I’d spoken to CAA on many occasions at shows before this announcement was made, and I have to say, that like many ‘real steel’ manufacturers, they’d always shown some ambivalence towards the airsoft market. Putting things into context though, they obviously saw what accessory industry giant MAGPUL was up to with their PTS line, developed specifically for RIFs, and took note of that success!

CAA then, in my opinion, made a very sound move by linking their ‘Airsoft Division’ with King Arms. King Arms, much like CAA, was founded in 2004, creating precision products and outstanding services. Making a bold move themselves in 2015 they moved their headquarters to Taiwan and have continued to provide excellent products of the highest quality; I’ve had a number of King Arms AEGs over the years, and personally rate them highly.

By combining AEGs of top quality with some of the most cutting-edge firearms accessories available, King Arms and CAA seems a match made in heaven, and the products we’ve seen from this alliance thus far have been spot-on. With the extended partnership with ASG to distribute these models, everything seems to be in place to ensure that we, the players, get full access to the newest variants as soon as they come available.

For once, I’m going to start with the internals of this replica, rather than the externals; the quick spring change system Ver.2 gearbox helps to adjust shooting power easily, and quality 8mm bearings are used for all the variants. On the variant I received for testing, there’s a 370mm inner barrel, fully adjustable hop-up as you’d expect, and a MOSFET fitted as standard.

I’ll take a moment here just to comment on the MOSFET for new players that may not be conversant with this technology, and why it’s important in AEGs. Simply put a MOSFET, or metal–oxide–semiconductor field-effect transistor, is an electronic ‘gateway’ between the trigger and motor in an airsoft gearbox, and its role is to preserve the trigger contacts in your AEG. It does this by regulating the current going from the battery into the trigger assembly; when the trigger is fully depressed and full contact is made, the gun will cycle. A MOSFET will not allow you to fire until the electrical circuit is 100%, as a weak connection creates arcing, which creates carbon build-up on your trigger contacts, and can cause more serious damage internally if things overheat. Whilst not strictly necessary, I have to say ‘top marks’ to the manufacturer for fitting this as standard!

With things nice and workmanlike internally, I’ll turn to the externals, and this is where the CAA proves that it is most definitely NOT just another M4! It would have been extremely easy just to throw on a sliding stock and pistol grip from CAA, along with their trademarks and say “job done”, but oh no, this baby goes the whole hog. Although they are clearly marked ‘For Airsoft Only’ what you get is a very, very distinctive full-metal replica ‘CAA’ EM-ULRA-A upper and lower receiver married to a ‘CAA’ X4MSD 12-inch quad rail. Rear-wired for ease of battery storage and changing, this M4 also benefits from a six position ‘CAA’ SBS Skeleton Style buttstock and a great replica of the ‘CAA’ UPG16 Interchangeable Pistol Grip; sadly, this does not have the interchangeable backstrap of the ‘real deal’ but it is most certainly very comfortable and ergonomic.

The flash-hider looks very similar to a Precision Armament M4-72 Severe-Duty Compensator. which is a great choice, as the real thing is said to provide recoil reduction of up to 75%, and its closed bottom construction, combined with upward biased venting, effectively eliminates both muzzle rise and dust signature. The carbine comes fitted with both front and rear ‘flip-up’ sights, which are unbranded but a deadringer for the CAA FRS and FFS. Even the 360 BB Hi-Cap magazine, that comes as part of the deal, is a spot-on replica of the CAA 30 round .223/5.56 MAG Magazine!

As complete a package as possible

So, here we have an AEG that works incredibly smoothly, looks the absolute mutt’s bits, and is absolutely solid as a rock, but as always that’s all well and good if the performance doesn’t match the rakish looks!

Well, I’m pleased to tell you, that as well as making use of top-quality components and looking just perfect straight out of the box, the CAA also shots like a laser! I chrono’d initially with .20g BLASTER BBs, using an ASG 11.1V LiPo, and as a ‘straight out of the factory’ gun, I got a reading at over 1.48-Joule/400fps! Now, this will drop slightly as the hop beds in but given that the 2017 Policing and Crime Act is now law, I needed to action things swiftly, so as not to be found holding a Section 5!

Luckily, the CAA, as I stated earlier, benefits from a quick-change spring system, which is fully detailed in the provided user manual, so it was simply a matter of installing an M100 spring to bring things into line; with a little “’fettling’, I soon had the CAA in line with the new legal requirements, firing at a completely consistent 1.13-Joule/350fps on a .20g. With the spring change, and using the 11.1V battery, this CAA was snappy as, with superb trigger response and a great ROF. Accuracy-wise, with the relatively long inner barrel, the CAA is no slouch either, easily reaching out 50m+ and on target each and every time!

Word has it that these ASG Proline models will be hitting the UK stores with a retail price of around £350-£370 and it’s my firm opinion that at that level you would really be buying into a little gem of a RIF; with sound internals, stunning externals, and great performance from the get go, the latest CAA M4s are really, really worth a look!