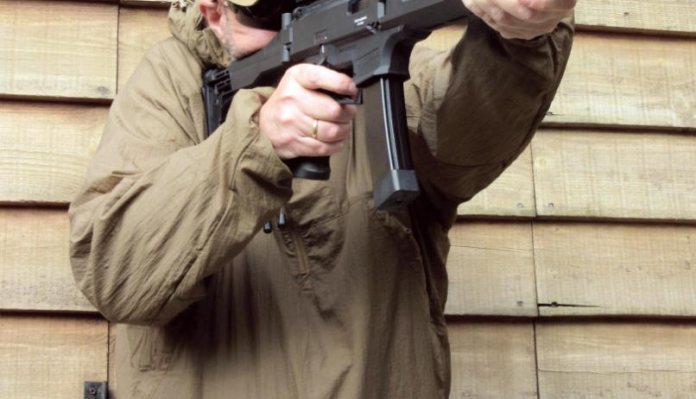 To say that the CZ EVO 3 AEG from ActionSportGames (ASG) has been anything less than a phenomenal success would be a massive understatement, and all the time, effort, and cash that they’ve put into developing it has certainly paid off! Airsofters worldwide have embraced it, and two years on from the release those original models are still going strong, so not only is the EVO tried and tested, it’s also become highly trusted; the EVO now has the largest dedicated single model user group on Facebook that I’ve ever seen, so obviously that trust goes a LONG way!

I was lucky enough to carry out the review of one of the first EVOs to arrive in the UK, and I’ve been following progress ever since. The review EVO that ASG kindly sent over to me from Denmark went on to a good mate of mine who loves all things CZ, and he’s used it for many, many happy weekends of skirmishing. You may ask why I gave the EVO to him, and the simple answer is that although I absolutely adored the outstanding performance of the original, I’m a big lad and it’s a diminutive little AEG.

In the past couple of years, I’ve seen my preferences change from SBRs and SMGs to more mid-length carbines; given my long arms, a slightly longer RIF just seems more comfortable to me. You can therefore imagine my joy when Paul from ASG announced that there would be two new additions to the EVO line, the EVO 3A1 Carbine and the EVO 3A1 Barrel Extension Tube (B.E.T.) Carbine; both models would feature a longer rail section at the front end, and the longer outer barrel (or B.E.T.) meant that the inner barrel length increased as well. Now, the original shorter version was no slouch when it came to accuracy, so I was intrigued to see what this increase would produce; more on this later…

In 2010, things were really shaken up when Ceska Zbrojovka (CZ) unveiled the EVO ‘Scorpion’ 3A1 SMG. The EVO 3 A1 was, and is, a thoroughly modern submachine gun chambered in 9mm Parabellum, specifically designed from the ground up for use by the military and security forces. The weapon is characterised by its unique shape and distinctive polymer body. The A1 variant features select fire modes, giving the user the choice of semi-automatic, three-round burst, or fully automatic fire. The standard version comes equipped with a folding, adjustable and fully removable stock for ease of storage and transport.

CZ offer a large range of factory accessories for the EVO, including fore grips, hand stops, iron sights, optics and lasers, slings, magazine couplers, and even dedicated pouches for the 30-round standard magazine. These genuine accessories are all available and fully compatible with the airsoft replica.

CZ have really been working with the EVO in the real world, and just like the airsoft version, it’s been an absolutely huge success. Available in two 9mm Luger variants, the latest Scorpion Carbine is a whole new animal. Building on the lauded SMG platform that first hit the US civilian market in pistol form in 2015 and has a built-in huge fan base there, the Carbine has a 16.2-inch barrel fitted with either a compensating muzzle brake or a faux suppressor built specifically for CZ-USA by SilencerCo.

Fitted with the factory’s folding adjustable stock, one of the nicest features of the carbine is the newly-designed forend, covered in M-LOK attachment points to keep the profile slim, while still being big enough to swallow most pistolcalibre suppressors should the user decide down the road to convert it into an SBR for use with a suppressor.

Low-profile aluminium adjustable sights round out the platform and a top Picatinny rail allows the mounting of a wide number of optics. Simple and reliable, the Scorpion not only has ambidextrous controls, its nonreciprocating charging handle is swappable and reach to the trigger is adjustable.

ASG have once again worked hand-in-hand with CZ to bring the two new carbine variants to market, and they are both fully licenced, thrilling AEGs. I received the EVO 3A1 B.E.T. Carbine for testing, this time courtesy of Fire Support, and immediately my love for the model was rekindled.

Already acknowledged as one of the toughest Airsoft guns around, all ASG EVO variants are designed to be built from fewer parts than most airsoft guns. The simple construction using high-quality components results in a durable, high performance AEG that is easy to take apart for service, maintenance and upgrades.

The EVO 3 B.E.T. is the first AEG that is built specially to use LiPo or LiFE batteries. With the use of an ULTIMATE basic motor, high quality wiring and an electronic control unit (ECU), the EVO 3 A1 is also the first AEG born to use 7.4V LiPo batteries right out of the box.

The EVO 3 B.E.T. gearbox is designed from scratch by ASG, rather than modifying existing gearbox versions to deliver functions they were not intended for in the first place, the EVO 3 B.E.T. internals have been purpose built to deliver advanced functions by using custom electronics, while having the strength necessary to handle powerful springs or high-speed solutions. Add to all this the easy power change design with one-tool, quick spring access, allowing fast in-the-field spring changes to best match mission requirements and you’ve got one heck of a package. The uniquely designed electronics offers single fire, full-auto and 3-shot burst, and is more power efficient than a standard electrical system.

The gun will stop firing when the magazine runs empty, and requires activation of the bolt catch when reloaded, thus simulating a realistic firearms experience. The EVO 3 B.E.T. features an integrated suppressor and extended foregrip with ergonomic design and fully ambidextrous controls that are easy to access and operate, even while wearing gloves.

In use, the EVO is a tremendous replica too; it’s very light at just 2530g, and even with the stock fully extended it’s only 870mm long!

A 6.03mm precision inner barrel fitted as standard ensures great accuracy. The battery compartment is accessed by removing the B.E.T. which allows the whole front end to slide forward and the battery to be inserted.

Unlike the tight compartment of the original SMG, the carbines will allow you to fit many more shapes and sizes of battery, although you still need to be careful whilst doing this, as the cocking handle is not retained and has a slightly annoying habit of flying out. This is a VERY minor niggle as the overall design is superb.

Even on a 7.4V, the trigger response is indeed excellent in each of the three firing modes. Whilst not recommended, taking things up with an 11.1V battery though changes things immensely, making both trigger and rate of fire truly stunning. Take my word for it though and stick with a 7.4, as this will ensure longevity of the system.

Another feature I love is the ‘last round cut-off’, and again the clever electronics come into play here. In a real firearm, when the last round is fired, the bolt is retained in its rearmost position. The empty magazine is removed, replaced with a loaded one, and the bolt release catch activated to put the weapon back into firing mode. Guess what? Yup, you guessed it, the EVO has this exact function, which makes it not only more fun as a replica, but means it’s actually a tremendous training tool. The airsoft magazines have a capacity of 75-rounds, rather than the 30 of the real thing, but with careful loading that could be easily overcome.

The ergonomics of the EVO have always been very good indeed but the new, longer foregrip really takes this to the next level. The pistol grip initially looks oversized, but it fills the hand perfectly and the angle is spot on. Fully ambidextrous controls and magazine release make this a perfect AEG for either right or left handers, although the bolt release lever is situated only on the left-hand side of the body. As with the real thing, the body is of polymer construction, but yet again ASG have spared no expense on this. The entire outer body is made entirely from reinforced polymers.

Once the magazine was loaded up, it was off to the range. Through the chronograph, the EVO sent BLASTER .20g BBs downrange at a most acceptable and site-friendly 0.89-Joule/311fps average; ASG quote 0.9-Joule on the M95 spring model, so this is pretty much bang-on! The hop up is placed underneath the dust cover of the ejection port and is easily accessed by simply pulling back the cocking handle. It’s a rotary adjustment, which can be set either by hand or using an Allen key; once set it, stays solidly in position.

Accuracy at 10-metres was simply breath-taking, and even pushing things out to 30-metres gave excellent results, and this simply using the excellent ‘iron sights’ that are provided as part of the package. In my opinion, ASG have again created pretty much the perfect replica, especially given the excellent three round burst mode, and I’m sure with a little fettling you could push that range out even further!

Once again, I have to say that I am very impressed indeed with the new EVO 3A1 B.E.T. Carbine. The whole range of CZ licenced replicas is first-rate, and ASG have spared no expense in recreating the carbine variants with some pretty stunning and unique features; even the trademarks are spot on. I have to admit that given the investment that they’ve obviously made I’d expected the EVO to be expensive, but it’s available at £349.00 from Fire Support and given what’s going on inside and out, I find this great value for money. Being a highly realistic licensed replica, in both form and function, this AEG will also appeal to skirmishers, Mil-Sim players and gun enthusiasts alike; so, yet again, ASG have come up with a winning formula.