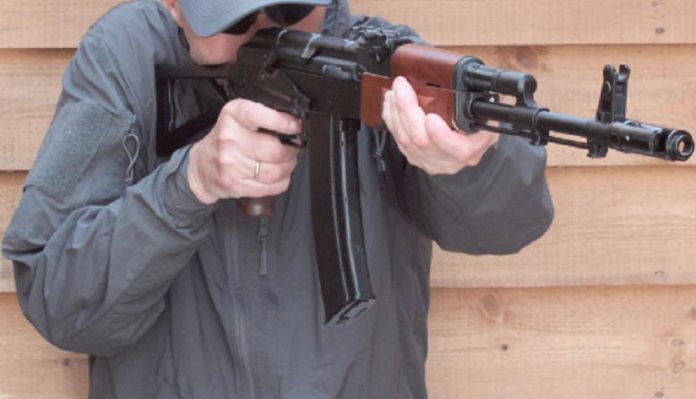 I bought my very first Classic Army AEG over 10-years ago now, and during my ‘airsoft life’, models from them have come and gone from my collection.

They’ve all been good, solid airsoft guns and performed well out in a skirmish, and given the fact that Classic Army were at the forefront of producing all metal AEGs even way back when, they’ve had a huge amount of experience in that field.

Classic Army is a manufacturer of airsoft replicas based in Hong Kong. They produce automatic electric guns or AEGs, and a small number of GBB (Gas Blowback) pistols. Within the airsoft community, Classic Army is often abbreviated as simply ‘CA’, and their AEGs are characterised by their high quality metal parts and realistic look and feel; most parts that are metal on the ‘real-steel’ counterpart are also metal on the replica! Of course, over the years, they’ve had the odd ‘lemon’ but as they offer TWENTY series lines including MP5, G3, G36, AUG, various M4 and even M134 Minigun replicas, then that’s bound to happen at some time, even with the most scrupulous quality controls in place.

Their stated goal is to provide cutting-edge products that the player can put their trust in, and they look for “Total Performance” from everything they create. Personally, I’ve never had a bad replica from Classic Army, and although many of mine now have new homes, due to changes in my own personal style of airsofting, I’ve no doubt that they are still performing solidly to this day!

One of the models that was traded many moons ago was the Classic Army ‘SLR105 A1 Para’, which now has been renamed the ‘CAKA1 Para’ by the manufacturer for some reason, and the new version is pretty much exactly the same as the old, so perhaps it’s just down to some internal re-branding, as their offering has grown. Whatever they call it though, what we’re looking at here is basically an AKS 74 with a side-folding steel stock!

It was way back in 1977 when the Western world first saw the ‘new Kalashnikov’ being carried by airborne troops in Red Square and rumour has it that the CIA paid $5000 for the first AK 74 captured by the mujahedeen during the Soviet-Afghan War, such was their eagerness to get their hands on a specimen of the latest model!

In truth though, the rifle had been around for some considerable time before the first sighting, as it was developed in the early 1970s by Russian designer Mikhail Kalashnikov as the replacement for the earlier AKM, itself a modernised version of the AK 47. Much like their western counterparts, the Soviet military were interested in the better performance given by intermediatecalibre high velocity ammunition and the main change was that the AK 74 used a smaller 5.45x39mm cartridge, replacing the 7.62x39mm chambering of earlier Kalashnikov-pattern rifles, and this enabled a number of steps forward to be taken. These improvements were primarily the result of converting the rifle to the new cartridge; compared to the preceding AKM, the AK 74 had better effective range, accuracy (which was a main development goal) and reliability.

The rifle also received a new barrel with a chrome-lined bore. The front sight base and gas block were redesigned. A support bracket was cast into the gas block assembly and was used to attach a BG-15c or GP- 25 under-slung 40 mm grenade launcher.

Like the AK 47 and AKM, the muzzle was threaded for the installation of various muzzle devices, such as the standard muzzle brake or a blank-firing adaptor, while a springloaded detent pin holding in the front sight post prevents them from unscrewing while firing. The distinctive muzzle brake of the AK 74 features a large expansion chamber, two symmetrical vertical cuts at the forward end of the brake and three non-symmetrical positioned vent holes to counteract muzzle rise and climb as well as lateral shift. A flat plate near the end of the brake produced a forward thrust when emerging exhaust gases strike its surface, greatly reducing recoil; when first tested outside the Soviet Union those who fired it concluded that it had a felt-recoil similar to that of a .22LR, which of course meant it could be kept neatly on target when used in full-auto mode, CCCP style!

The AK 74 was equipped with a new shape of butt, a handguard which retained the AKM-type finger rest, and gas cylinder. The stock had a shoulder pad different from that on the AKM, which was made of rubber and serrated for improved grip. In addition, there were lightening cuts on each side of the butt. The butt, lower handguard and upper handguard were first manufactured from laminated wood, whilst the AKS variant replaced the rearmost wood with a skeletonised butt, which folded neatly to the left hand side of the receiver; it was down to this feature that the AKS first started being referred to as the ‘Para’.

When I collected the Classic Army replica ‘AKS 74’ from my friends at Fire Support, one of the very first things I noted were two distinct external changes from the model I owned some years ago. Firstly, the wood handguards were a much better colour than the original orange ‘Chinese wood’ versions that came with mine, as this time they had a very rich brown, almost ‘chestnut’ hue. Secondly, the pistol grip was also a midbrown colour rather than black, much more like what is seen on a real AK 74 where the colours can vary between almost orange to dark brown. Of course, neither of these changes affects performance one bit, but it’s nice when a replica does look right!

To sum things up externally the ‘CAKA1 Para’ benefits from a stamped steel receiver, real wood handguards, a steel folding stock, fully adjustable front and rear sights, the correct AK 74 pistol grip and the distinctive steel AK 74 muzzle brake. The finish of the AK is superb throughout to be honest, and it is absolutely solid as a rock, with not a wobble or a creak apparent anywhere.

It comes with a single 500rd ‘AK 74 Polymer’ Hi-Cap magazine, which is finished in plain black; if you fancy the commonly seen ‘orange Bakelite’ magazine though, Fire Support offer a great five-pack of MAG 140rnd midcaps for just £44.00, which work in perfect harmony with the rifle. Both the supplied and aftermarket magazines seat solidly, and feed well. If you fancy fitting an optic to your ‘Para’, then one additional feature that comes as standard, is an AK sight mount on the left hand side of the receiver; you’ll need to buy the correct sight rail to clamp to this though, and please note that if you fit the rail then you can’t close the steel stock!

Internally, Classic Army AEGs have always been solid performers and the parts used are up there with the best of them. Powered by a battery hidden under the top cover, inside the AK you’ll find a tried and tested Version 3 full metal, fully upgradeable gearbox, along with a short type motor. This is pretty standard fare, but it works well.

On the range, the Classic Army AKs have always given very respectable performance, and given the 455mm inner barrel, pretty solid range and accuracy too. First I ran the rifle through the chrono on .20g ‘Hardball’ BBs and recorded a consistent and site friendly 1.06Joule/338fps. Using just the iron sights, which are indeed easily adjustable, I was easily able to hit targets and grouped pretty tightly at the limit of the 30m range. A 7.4V LiPo battery fits easily under the top cover, but if you’re judicious you can just squeeze in and 11.1V pack, which brings up the ROF quite seriously!

Many airsofters, especially those just starting out, try to find a replica model that will work for a variety of loadouts and themes, and the ‘CAKA1 Para’ certainly ticks all the boxes in this respect. If you look at timeframes, the AK 74 was used way back in Afghanistan, so you’re good for a ‘Cold War’ loadout, and is still being used today, so that’s ‘modern/OPFOR’ and everything in between cracked too. If you favour the ever-popular ‘contractor’ look, then the AK works for that too.

With great performance out of the box, reasonably cheap accessories, and an asking price of just £201.00, this is an absolutely cracking bit of kit and if you’re in the market for something other than the ‘M4’, then I’d really suggest you take a good long look at this little corker from Classic Army!

Thanks as always to www.fire-support. co.uk for supplying the test/review sample. Please do visit their website to check out this model and the comprehensive range of Classic Army models they offer.