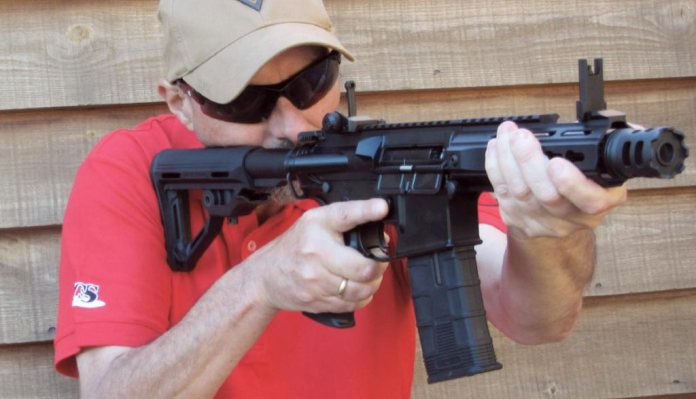 It sometimes hits me just how long I’ve been involved with the wide, wide world of airsoft, and this year I celebrate 22-years of being involved in the games, and subsequently the industry itself. I’ve seen airsoft brands come and go during this time, but ICS have been around since 1995; so, in airsoft terms, that makes them, like me, one of the ‘old timers’ of the industry; as with many manufacturers, they’ve had their fair share of ups and downs in the past but what I see arriving from them these days shows that they’ve paid great attention to ironing out the bad and really nailing the good.

Some airsoft companies seem content to just follow a single line of progression in relation to their designs but I have to say in the past few years, ICS have not done this in any way. I’ve always been a fan of their split gearboxes, which are reliable and easy to work on should you so desire, and personally, I’ve never had an AEG from them that has been anything other than exemplary. ICS have pretty much always provided sturdy, full-metal performance replicas of some of the most iconic firearms out there, with first-rate internal parts and mechanisms.

These days, ‘M4’ replicas are a dime a dozen, and literally every manufacturer has not just one, but many different variations on that theme. I use the word ‘replica’ a lot in relation to airsoft guns and that’s because many manufacturers strive to accurately replicate the real thing as closely as possible. ICS though, obviously spotted the trend in the real firearms world, where they saw many smaller manufacturers taking their own direction in terms of design, especially in relation to upper and lower receivers, rail systems, flash hiders/muzzle brakes, and stocks.

With their more recent releases, ICS have followed that trend, not only designing their own metalwork, but also creating some fabulous designs for stocks, pistol grips and back-up ‘iron sights’, and their CXP range of AEGs shows this completely; in my mind, they are absolutely super designs, which follows the trend away from ‘military’ models, instead following the creation of lightweight, slim-line, ergonomic rifles and carbines for the airsoft player.

Internally, the CXP series of AEG are all made from the same components and feature the aforementioned split gearbox, an Infinite 2500 long pin motor, and an M100 spring. They all also benefit from the new ICS Electronic Blowback function, which is a nice nod towards realism, giving at least some kinetic feedback. Given the M100 spring, it’s recommended that you use nothing greater than a 7.4V LiPo, and dependant on the exact model you can have, your CXP either front or rear wired; I’ll come back to this later.

With some solid internals, things get even better on the outside of the CXP models though, as the upper receiver looks like it really is CNC machined with some aggressive, dynamic lines. The fit to the lower is incredibly tight and precise, with no gaps or wobble in evidence; at the rear of the upper is a really nice ambidextrous charging handle, which seems to have become a bit of a fixture on the CXP range too.

The short six-inch Keymod rail system on the ‘Captain’ models is quite a unique design as well, and very neatly incorporates a post flip-up foresight; there’s also a flip-up rear sight that comes fitted as standard. The front end is nicely finished off with what ICS refer to as their ‘Steel Crown Flash Hider’, which is a solid and aggressive-looking lump of metal. There are two variants of the ‘Captain’ that are almost identical; one is a ‘pistol’ with no stock that utilises an external battery box, whilst the other is a true carbine and this is my personal preference of the two, as the battery fitting solution is more simple and elegant. The tough, ABS Plastic, six-position adjustable MTR stock provides lots of adjustability, comfort and stability, and simply sliding this all the way off lets you access the battery compartment.

Other than that, the ‘Captain’ features a comfortable pistol grip of ICS design, along with an enlarged trigger guard and singlepoint sling plate. The magazine is the T-Mag, which is their innovative 300-round high capacity model with the clear ‘windows’; this is really neat, as you can, at a glance, tell how many BBs you expended.

Legally on the money

Obviously, these days we all need to be careful with the power levels of our RIFs, as the new PCA clearly outlines these. All ICS Guns (except their M1 Garand) are downgraded in the ICS factory to UK legal specifications before shipping, so this means that the guns will chrono between 0.78-Joule/290fps and 1.13-Joule/350fps on a .20g BB dependant on barrel length and model. ICS also install an M100 spring instead of their standard M120 and an Infinite 2500 motor instead of a Turbo 3000 motor. The reason for the spring change is to get the velocity below the new UK legal limit, and the motor change is to minimise motor over-spin that causes two BBs being fired from one pull of the trigger on sub 1.48-Joule/400fps replicas.

Being legally compliant from the get go though, doesn’t mean a degradation in performance. Having owned a number of ICS AEGs over the years, the flawless operation and performance standard of the ‘Captain’ came as little surprise to me. Loaded up with .20g RZR BBs, and with a NUPROL LiPo fitted, it was time to take the little carbine to the chrono, and again, given the M100 spring fitted and the short inner barrel, it was no shock when it racked up a consistent and site-friendly 0.95-Joule/321fps.

Accuracy was again as I expected, that being excellent once the hop was securely set. Shots out to 25-metres were absolutely spot-on, with BBs ranging out to a good deal farther than that. ICS AEGs have never been slouches when it comes to accuracy, and the CXP line obviously follows that particular tradition; the little ‘Captain’ may well be designed for CQB style airsoft, but believe me when I say that it will also hold its own in the woods.

You can pick up a black CXP ‘Captain’ with the MTR stock from Fire Support for £261.00, although do keep a close eye out on their website for ‘specials’ as currently they have the black ‘Captain’ pistol variant listed for just £199.00 (both variants are available in black or tan)! Once again, I have to say that ICS are providing tremendous value for money; they make AEGs you can rely on, that you can simply take out of the box, fit a battery, load up with BBs and take straight out onto the range or skirmish field.

I am very proud of my ongoing relationship with the ICS brand, and deeply honoured to be ranked as one of their ‘Captains’, even though in my case this is a recognition of my years in airsoft, rather than an indication of an active ‘ambassadorial’ role for them. Search out the active Captains around the world on social media though, and rest assured that they’ll be bringing you the very latest updates from ICS, as well as showcasing some seriously good airsoft play!