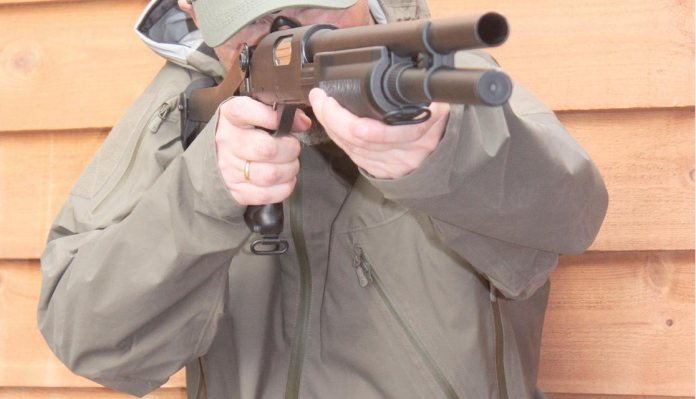 Over the years, I have owned and skirmished with many different makes and models of airsoft shotgun, both spring and gas powered, and I absolutely love them; although personally I prefer spring versions, as they are so simple (and yes, I have tried the TM gasser, and yes, it is very nice!). I’ve had everything from full-length ‘trench guns’ for WWII games, ‘sawn offs’ for Namsoft, and ‘breachers’ for modern day and I have to say there’s something very satisfying about racking the action and just letting the BBs fly.

With the rise of airsoft practical shooting (AIPSC) though, there’s another place where a shotgun is needed and that’s in three gun competitions; the requirements here are slightly different from those imposed by skirmishing, in that you need to be able to ‘show clear’ at the end of a course of fire. That’s where shell loading models really come into their own and they needn’t break the bank either!

The real Remington 870 pumpaction shotgun is a classic model; it was introduced in 1951 to fit into a space in the manufacturer’s range; they needed something at the time that was modern, streamlined, rugged, reliable, and relatively inexpensive and the model 870 neatly fitted the bill. Sales of the 870 have been staggering; by 1973 two million had been sold, seven million by 1996 and a whopping ten million on 13th April 2009! Yes, you read that right; there are now over ten million of these wonderful shotguns in circulation and Remington just keep on building them!

Remington 870s have been, and still are used by numerous military units worldwide and are also extremely popular in Law Enforcement circles. The 870 was used by the SAS as a breaching weapon and was known by the UK Forces as the L74A1, and there’s even an ‘SAS private purchase’ model in the Imperial War Museum! The popularity of the 870 series is down to its simplicity, rugged construction and reliability; available in 12, 16, 20, 28, or .410 bore, they are extremely versatile and the number of aftermarket parts available for them is an industry in itself.

More Bang For Your Buck!

I’ve owned my original 870 over folder, a full metal G&P model, for a while now, and it’s always been a bit of a favourite, as it’s the model that you’ll see in numerous movies and TV shows; mine is the model with the extended tube and metal over folding butt, carried by Linda Hamilton playing ‘Sarah Connor’ in ‘Terminator II: Judgement Day’, but you’ll also see it in home grown shows like ‘Ultimate Force’ and ‘Strike Back’.

Although the G&P 870 is a lovely replica, the fact of the matter is that the ‘classic’ models such as the over folder A- feed from a rather fiddly magazine insert that makes it difficult to ‘show clear’, and B- now go for some serious money even if you can get your hands on one. However, if you’re not willing or able to spend that amount of money on what is essentially a humble springer, then all hope is not lost; I was speaking with the team at iWholesales Ltd when I was at IWA this year, and they’re a fine bunch of folk, so I keep a regular eye on their website, as they do tend to offer some unusual models that we don’t always see in the UK. A couple of months back, I noticed that an ‘870-alike’ model had popped up in the shape of the CYMA CM352, so I sent an email off to them asking if I could get one to test, and within a week or so the package turned up. CYMA have always been good value for money but I have to admit that I’ve never had anything from them for some reason, although I’ve met many players over the years who swear by the brand. What arrived showed solid craftsmanship, attention to detail and proved to have very respectable performance.

In appearance the CM352 is exactly like the more expensive G&P but is polymerbodied, as opposed to full metal; that said, the polymer of the body, pump, pistol grip and outer barrel is very solid indeed, with not a creak or flex. It is very solidly put together. There are numerous ZnAL metal parts used though, including the inner barrel, grip slide, shell ejection port, tactical sling swivels, barrel clasp, and chamber cover. The over folding collapsible stock is made of steel though, just like the real thing.

Controls are simple, with a push through safety and bullet chamber lock button; these are located right next to the trigger, which makes their operation very simple and intuitive. The steel stock folds over onto the top of the body, which allows for fast reduction of the size of the shotgun and is great for CQB or transport.

What I really like about the CYMA ‘870’ though, is the operation, as it has three inner barrels! As you’d expect accuracy is not up there with the G&P but it is by no means a slouch in that respect; in fact, the tri-barrel arrangement allows you to fire three BBs at once, which directly results in a greater chance of a hit. BBs are loaded into a replica shell of thirty BB capacity, which is in turn placed in the chamber of the shotgun; rack the action, pull the trigger and BAM, three .20g BBs fly downrange at a mean velocity of 0.83 Joule/300fps. Repeat nine more times, change out to another shell and off you go all over again! For competition purposes this is ideal, as to ‘show clear’ you simply drop the shell out, pull the trigger to ensure all BBs are expended, and then present to the RO.

What’s also great about the CYMA CM352, is the price, as it will only set you back around £65.00 in the UK. Most retailers shipping costs are very reasonable these days, so you could have your very own ‘870’ delivered to your door for less than 75 quid! The CM 352 is also compatible with thirty shot BB shells from other manufacturers such as NUPROL; you can pick up a pack of four spare NUPROL shells for just £7.99, add a nice sling and a gun sleeve and be fully set up and ready to go for well under a ton. If you want to add a fixed butt or wood furniture rather than the steel over folder and the polymer pump, there are accessories out there to let you do this; you can even ‘Magpul it up’ if your heart desires!

Whatever the size of your wallet, it’s pretty easy to add a shotgun to your armoury and believe me when I tell you that when you do you won’t be sorry, as they’re great fun to own and skirmish with, and in my opinion you just can’t beat the price of the CYMA. Every airsofter worth their salt, whether they be a hard-core Mil-Simmer, a Sunday Skirmisher, or an AIPSC shooter should own a good quality spring powered shotgun model. There’s no battery to contend with, no gas to vent on cold days, just a big old spring that’s cocked by the pump action. Spring guns have very, very little that can go wrong with them and they can be easily upgraded with the minimum of parts; simply change the spring to raise or lower the power and install tightbore barrels to improve the accuracy.

These days, many good sites run ‘spring and gas only’ days, which are tremendous fun, and normally that means you’re going to run with a gas pistol and a spring shotgun. A good ‘springer’ (and bear in mind here that a lot of airsoft sniper rifles are spring powered) can be superbly accurate, especially with a longer barrel. Given the fact that you need to re-cock the spring after each shot it does also means that your teamwork and tactics need to be spot on, and knowing how to shoot of course is very important; I actually prefer this kind of play as it eliminates the ‘spray and pray’ players from the equation.

Many Mil-Sims are played on semi-auto only as a matter of course, so running a shotgun in the scenario doesn’t necessarily put you at a huge disadvantage, especially if it’s accurate. For AIPSC, numerous participants are now looking to a shotgun to bring them into ‘three gun’ territory and I have to say that I find this development hugely exciting, as it just lends just one more avenue to the airsoft experience. Whatever type of airsoft you’re involved in, a good spring shotgun is a great investment and the CYMA CM352 really lets you do this without emptying your bank account!

My thanks also go to iWholesales for supplying the shotgun for review; you’ll find CYMA models stocked by most good airsoft retailers.