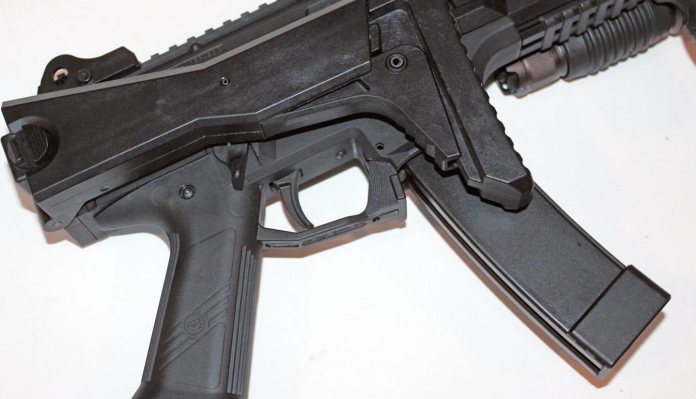 It’s not often that something unique hits the market in relation to airsoft replicas these days, but Action Sport Games (ASG) really does seem to have pulled off a fairly major coup with their latest collaboration with real firearms manufacturer Ceska Zbrojovka (CZ).

CZ are a prolific manufacturer of firearms and have a hard-won and long-standing reputation for excellence worldwide; in fact the CZ 75 pistol was once described to me by a seasoned firearms instructor as “the best combat handgun ever invented”, and this standing has been increased further with the recent introduction of new pistol models like the CZ P-07 and P-09.

CZ is also very well-known for the diminutive Model 61 Skorpion which almost defines the term ‘machine pistol’. Developed for combat vehicle crews it also sits neatly into the somewhat newer family of personal defence weapons; with an overall length of just 271mm/10.65-inches and the wire stock folded across the top of the body the Skorpion could be carried in a special holster, but offers fully automatic fire in an emergency. Offered initially in 7.65mm, the Skorpion was also chambered in 9mm Short, 9mm Soviet, and 9mm Parabellum and could be fired comfortably one handed, although extending the skeleton stock allowed controlled fire from the shoulder.

In 2010 though things were really shaken up when CZ unveiled the ‘Scorpion’ EVO 3 A1. This was a totally new firearm that nominally shared its name with its predecessor, but otherwise was completely different. With a totally new design which followed the submachine gun model rather than that of the machine pistol, initial tests and reports described a weapon that was lightweight, easy to manipulate and operate, and superbly functional yet ergonomically efficient.

The EVO 3 A1 is a thoroughly modern submachine gun chambered in 9mm Parabellum, specifically designed from the ground up for use by the military and security forces. The weapon is characterised by its unique shape and distinctive polymer body. Available in two models (along with a stockless ‘pistol’ for the US market) the A1 variant features select fire modes, giving the user the choice of semi-automatic, three-round burst, or fully automatic fire, while the S1’s selector simply acts as a safety allowing only semi-automatic fire. All controls are also fully ambidextrous. The standard version comes equipped with a folding, adjustable and fully removable stock for ease of storage and transport. The front hand guard has Picatinny Rails at three, six, and nine o’clock for the attachment of tactical flashlights and lasers, whilst the whole length of the body on top has a continuous rail for mounting optics.

CZ offer a large range of factory accessories for the EVO, including fore grips, hand stops, iron sights, optics and lasers, slings, magazine couplers, and even dedicated pouches for the 30 round standard magazine. These genuine accessories are all available and fully compatible with the airsoft replica.

This is indeed where things get interesting with the ASG replica. Working directly alongside CZ, ASG had access to the blueprints and schematics of the real weapon to work from, allowing them to create an EVO replica that was exactly 1:1 in scale. It’s often the case where replicas are not licenced that the scale varies slightly meaning accessories become incompatible. The launch of the EVO 3A1 airsoft replica marks a milestone in the history of ASG, as for the first time they have developed and manufactured a complete AEG, from overseeing the first design drafts to producing and marketing the final product.

Quoting directly from the ‘EVO Story’: “In May of 2009 during a visit with our business partners, the world-renowned arms manufacturer CZ in the Czech Republic, CEO of ActionSportGames, Johnny Petersen, was shown the real steel version of the CZ Scorpion EVO 3, at the time a project in development. Immediately he saw the potential of the EVO 3 as a Proline Airsoft AEG with its futuristic design and lightweight construction.

Agreements between ASG and CZ were reached in 2010, and shortly after CZ presented the EVO 3 to the world at the IWA trade fair in Nuremberg, the 3D drawings were handed over to ASG, and the project of turning the EVO 3 into a proline Airsoft AEG began to take shape. ASG wanted to build the EVO completely in Europe, the first time that this had been done with an AEG replica. Numerous challenges were overcome during the development process as they went right back to the drawing board for every single component, much as CZ had done with the real thing!

ASG actually took the opportunity to redesign the very heart of any AEG: the gearbox. Their goal was to make it as near indestructible as possible, while keeping it affordable, easy to maintain and upgrade. By strengthening well-known weak spots, simplifying the mechanics and incorporating electronics they achieved an end-product that set new standards within the industry.

The EVO 3 A1 gearbox was designed from scratch by ASG; rather than modifying existing gearbox versions to deliver functions they were not intended for in the first place, the EVO 3 A1 internals have been purpose built to deliver advanced functions by using custom electronics, while having the strength necessary to handle powerful springs and high-speed firing upgrades. The aluminium alloy gearbox fully encases the cylinder, and the ventilation hole is rounded at the corners, eliminating typical stress points, and providing better support for the piston which is perfect for upgrading. Not content with the limitations of traditional gearboxes, ASG designed the EVO 3 A1 gearbox with an innovative electronic control unit. This allows reduction in the number of mechanical and electrical parts resulting in increased battery and motor efficiency, while offering an instantaneous and crisp trigger response in semi, three round burst, and fully automatic modes.

The operation of the gearbox is constantly monitored and if any anomalies are detected the gun will stop firing, preventing damage to internal components. The electronics will stop the gun from firing when battery power becomes too low, which helps to protect the LiPo battery necessary for operation of the replica from damage due to over drainage. The choice of aluminium alloy for the gearbox also allows it to act as a heat-sink for the electronic circuit board. If you decide to use an 11.1V battery (more on this later!), a lot of current is being put through the system – this generates heat and by using the entire gearbox as a heat-sink the electronics have ideal working conditions. The use of electronics also eliminates the need for a fuse box, reducing power drain and providing more power for the motor.

ASG really have pulled out all the stops with the design of the EVO, and what this ultimately means is a first-rate airsoft replica for the player that wants just a little bit more from their gun. Not only do the top-notch electronics make the EVO more efficient, they actually protect it from damage as well. It’s all too easy to have an AEG malfunction, but they have gone as far as they possibly can to make this a thing of the past.

In use the EVO is a tremendous replica too; it’s very light at just 2400g, and even with the stock fully extended it’s only 623mm long! A 6.03mm precision inner barrel of 208mm fitted as standard ensures good accuracy given the short length. The battery compartment is accessed by removing the flash hider and a locking nut which allows the whole front end to slide forward and the battery to be inserted. It’s a tight compartment that you’ll struggle to fit anything more than a 7.4V LiPo into, and you need to be careful whilst doing this as the cocking handle is not retained and has a slightly annoying habit of flying out. This is a VERY minor niggle as the overall design is superb.
Even on a 7.4V the trigger response is indeed excellent in each of the three firing modes. Taking things up with an 11.1V battery though changes things immensely, making both trigger and rate of fire truly breathtaking. Personally I would run an external battery box containing an 11.1V pack, which would also make changing batteries in the field more straightforward.

Another feature I love is the ‘last round cut-off’, and again the clever electronics come into play here. In a real firearm, when the last round is fired the bolt is retained in its rearmost position. The empty magazine is removed, replaced with a loaded one, and the bolt release catch activated to put the weapon back into firing mode. Guess what? Yup, you guessed it, the EVO has this exact function which makes it not only more fun as a replica, but means it’s actually a tremendous training tool. The airsoft magazines have a capacity of 75 rounds rather than the 30 of the real thing, but with careful loading that could be easily overcome.

The ergonomics of the EVO really are very good indeed given its short overall length. The pistol grip initially looks oversized, but it fills the hand perfectly and the angle is spot on. The short railed section at 6 o’clock is perfect for the placement of a fore grip or hand stop which allows the muzzle to be perfectly controlled. Fully ambidextrous controls and magazine release make this a perfect AEG for either right or left handers, although the bolt release lever is situated only on the left hand side of the body. As with the real thing the body is of polymer construction, but yet again ASG have spared no expense on this. The entire outer body is made entirely from reinforced polymers. In order to match the look and feel of the original firearm and to ensure maximum strength, each individual component is a mixture of PA6 and either glass pellets or glass fibre in order to achieve the most realistic and solid results.

Once the magazine was loaded up it was off to the range. Through the chronograph the EVO sent NUPROL .20g BBs downrange at a most acceptable and site-friendly 311fps average. The hop up is placed underneath the dust cover of the ejection port and is easily accessed by simply pulling back the cocking handle. It’s a rotary adjustment which can be set either by hand or using an Allen key; once set it stays solidly in place over multiple rounds. Accuracy at 10 metres was simply stunning, and even pushing things out to 30 metres gave excellent results considering the short inner barrel. In my opinion ASG have created pretty much the perfect close to mid-range replica, especially given the excellent three round burst mode, and I’m sure with a little fettling you could push that range out even further!

Overall I have to say that I am very impressed indeed with the new Scorpion. The whole range of CZ licenced replicas is first-rate, and ASG have spared no expense in recreating the EVO with some pretty stunning and unique features; even the trademarks are pretty spot on. I have to admit that given the investment that they’ve obviously made I’d expected the EVO to be expensive, but it’s out at £359.99 with most retailers in the UK – a price that, given what’s going on inside and out, I find entirely reasonable. I certainly hope to see more replicas from Action Sport Games if this is the standard that they work to! www.actionsportgames.com