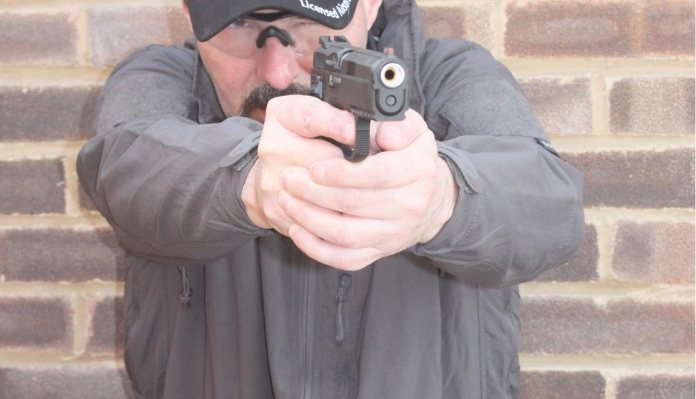 Until recently, my choice of handgun for practical shooting competitions has been a beautiful replica of the original CZ75 from Action Sport Games (ASG), but earlier this year posts began to appear on social media from Paul Wignell, the UK & Ireland Sales Manager for ASG, trumpeting the arrival of the all new CZ SP-01 SHADOW in airsoft guise.

Luckily, I’ve had the great pleasure to shoot with Paul, so I know he is no slouch at running a practical course of fire himself and his confidence in this new model certainly made me sit up and take notice. As the online marketing campaign gathered speed though I had to wonder to myself if the yet unreleased pistol could live up to all the claims being made about it? It certainly looked great in all the images, but we all know that images can be tinkered with, don’t we?

Whilst I waited patiently for the review model to be sent to me for testing, I spent some time looking into the history of its forebears. The CZ75 was introduced in 1975 by one of the largest small arms manufacturers in the world, Ceska zbrojovka Uhersky Brod (CZUB, or simply CZ) from the Czech Republic, a manufacturer prolific in both military and sporting firearms. The CZ75 was one of the original, innovative 9mm pistols featuring a staggered column magazine, all-steel construction, and a hammer forged barrel. It’s a model that amongst shooters worldwide has a fearsome reputation for high-quality, accuracy, and durability. Over the years, though, the original model of 1975 went through numerous changes and upgrades, which resulted in such models as the CZ75 ‘Champion’, the CZ75 ST (Standard) and CZ75 M (Modified).

In 2009, CZ launched a worthy addition to their range of handguns, the polymer P-07, and in 2013, not content with just one polymer model in the range, CZ moved onwards to introduce the P-09 ‘Duty’. In the real world, the P-07 and P-09 have been fully tried and tested in the harshest of conditions, and have proved a more than worthy addition to the range of excellent practical handguns offered by CZ.

The very latest model in the CZ75 though family is the SP-01, and this variant is the first full size handgun from CZ to feature the improved manufacturing technology and ergonomics of the NATO-approved CZ 75 Compact P-01 model. Featuring an integral 1913 accessory rail, rubber grip panels, and CZ’s corrosion resistant black polycoat finish, the SP-01 is the newest production model to join the family of pistols based on the original CZ75 (SA/DA) platform, although the SP-02 had its first showing at IWA this year and is eagerly anticipated.

Borrowing from the improved grip geometry of the compact P-01 pistol, the SP-01 utilises an extended beavertail to protect the shooter’s strong hand, as well as allowing for a deeper and more secure grip. The new grip geometry, chequering in key areas on the front and back straps, and redistribution of mass provided by the accessory rail noticeably decreases perceived recoil from previous models and allows for more rapid target acquisition and transition.

The SP-01 was designed as a military and law enforcement duty sidearm and is currently in use by a number of security forces. Thanks to its exceptional accuracy and superior handling characteristics though, the CZ SP-01 has also found supporters in the fields of sport and target shooting.

You may have noticed in all the reviews I carry out on replica firearm models that I regularly make use of the words ‘Fully Licenced’, and it’s something that is very important to me. There are many ‘replicas’ out there that may on first glance look like the original that they are designed to resemble, but in many cases it is just that, a ‘resemblance’ rather than a true reproduction. Whilst this may seem unimportant, in fact it’s a vital part of how the industry works.

Development of any firearm takes years, and costs many thousands of pounds, and both aftermarket parts and accessories form yet another part of the process. Trademark infringement is a serious matter, and failing to work with real world firearms manufacturers could see them withdrawing their products altogether from the replica market.

In my opinion, Action Sport Games (ASG) from Denmark are one of the best in the business at getting their licensing agreements right, and ensuring that what we as buyers get is 100% correct. Although only established as ASG in 2003, the company heritage goes right back to the 1960s.

In relation to the SP-01 SHADOW, this means that they have worked handin- hand with CZ, even down to using the original design specifications of the ‘real deal’ to provide a replica with a completely authentic look and feel. Each SP-01 comes with authentic CZ markings; on the left of the slide you’ll find the legends ‘CZ SP-01 Shadow 9x19’ with a small CZ logo and on the right a small ASG logo and ‘Cal 6mm BB’. Inset to both sides of the pistol grip is a small CZ logo, meaning that this is a fully tried, tested and properly licenced replica.

The SP-01 arrived neatly packaged in a striking, fully illustrated box which contained the pistol, one magazine, a full-colour instruction manual and a small box of ASG BBs. Externally, this is a large but pleasing handgun; I wear a regular size Large glove, and although slim, the grip of the CZ filled my hand well with some positive chequering, great ergonomics and of course the extended beavertail. The SP-01 is full metal, so it’s also a nice weight in the hand, 1110g as opposed to the 1088g of the real thing, but of course there is a little extra weight in the airsoft gas magazine. It feels substantial and solid throughout. Controls are as per the real thing too; there’s an ambidextrous safety to the rear, a functioning slide release, and the magazine catch is down to the left behind the pistol grip. At the lower front is an integrated rail, which allows standard accessories to be fitted; I tried it with several different handgun lights and all fitted perfectly with no wobble.

The finish of the CZ replicas offered by ASG has always been spot on and the SP-01 is no exception to this, and if anything it’s actually even nicer than its predecessors, finished, as it is in a deep, matte black, which accurately mimics the polycoat finish of the real thing. Like the original CZ75, the breechblock and barrel of the SP-01 are finished in silver, as is the trigger; I’ll come back to the trigger in a bit. The sights as standard are excellent too, with a simple notch to the rear and a very, very tidy red fibre optic at the business end!

In use, the ASG SP-01 is equally flawless. The action is very crisp indeed, the slide easily moved to the rear thanks to some deep serrations on either side of it. When cocked, the safety clicks into place firmly and solidly. The pistol comes with a gas magazine with extended floorplate as standard, which is swift and easy to load, and this snaps into place with a reassuring “clack”.

Loaded up with .20g BBs and gas, the SP-01 sends BBs downrange with astonishing accuracy, giving excellent groupings at 10-metres; I was easily able to group 10 BBs in a tight grouping straight from the box with no adjustment to the hop! The pistol does have an adjustable hop-up though, which is accessed by removing the slide, and adjustment is very well explained in the full-colour instruction manual supplied with the pistol. As mentioned earlier, the SP-01 has a trigger which is every bit as good as the original CZ75, as it breaks smoothly and consistently.

On .20g ammo it chrono’d at a steady and reliable average of 0.78 Joule/290fps. ASG do offer a CO2 magazine as an accessory and this raises the power a little giving an increased average of 1.04 Joule/335fps; I see this as a real positive as the CO2 magazine will give greater consistency in terms of rapid competition shooting and use during the colder months of the year.

Overall, this is a really superb airsoft pistol and is worthy of a place in anyone’s armoury. It looks and feels great, shoots consistently and extremely accurately, and cycles perfectly on both green gas and CO2. ASG pistols are stocked by most good airsoft retailers, and the SP-01 sells for around £120.00, which is excellent value for money considering the quality and the fact that it is fully licenced; you can also buy some fabulous, brightly coloured aluminium pistol grips, along with a competition rail and extended magwell as accessories if your heart desires, the ‘deep blue’ being the winner in my opinion!

If you’re in the market for a new pistol, for either skirmishing or competition, then I would thoroughly recommend that you give the CZ SP-01 SHADOW Gas Blowback from ASG your full attention. My thanks go to ASG for supplying the review sample.