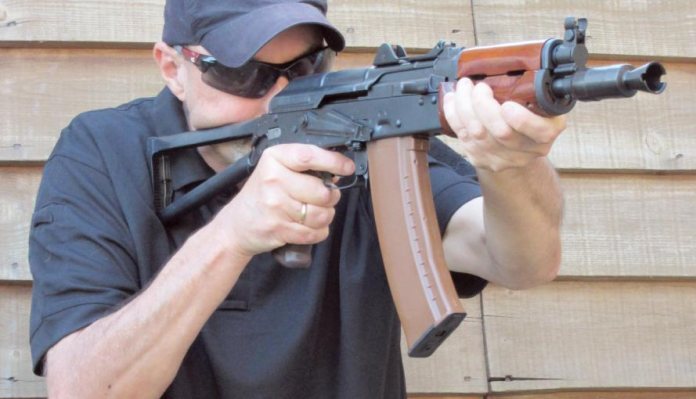 Although I’m a sucker for all the members of the now very extended ‘Kalashnikov’ family, I have to say that my personal favourite, both in real and replica form, is the smallest member, the AKS 74U. I’ve had a couple of chances to shoot the real version of this potent wee beastie, and over the years there has always been one of these in my personal airsoft collection, and I went through a number of electric versions before finally settling on my current gas model. This, to me, is the very pinnacle of my ‘suchka’ collection, and I have to say that it would have to be something very special indeed to persuade me away from it.

However, when my very good friend, Ross from NUPROL, called me to say that they would be taking on the distribution of the E&L Airsoft brand in the UK, in an exclusive agreement, he certainly got my attention; I’ve been following the E&L online user group for some time now and the brand certainly has a very committed following, and the general consensus has been that they are superbly well made airsoft guns with great performance out of the box. Of course, Ross knows me far too well and couldn’t help but tease me that there was an ‘SU’ model in their first delivery. I had to get my hands on this!

E&L are a Chinese company that have quite quietly been making inroads to the UK market with their fabulous looking AK variants. Although they are well known for their real firearms, namely the Type 56, they don’t take parts from real AKs and convert them to airsoft parts, which of course could be massively problematical in the UK, but instead they have modified their plant so the parts they make are only made for airsoft guns and could have no real world application. What they do differently is to make their airsoft guns up to real firearm standards, using real wood and steel, which makes them look and feel incredibly realistic!

The original AK47, designed by Mikhail Kalashnikov in the late 1940s, has been in service since its initial adoption by select units of the Soviet Army in 1948. In 1959, the AKM, Avtomat Kalashnikova Modernizirovanniy, or modernised AK, was introduced and this model is probably the most ubiquitous variant of the entire AK series and it has been adopted by most member states of the former Warsaw Pact and many African and Asian allies as well; it has been widely exported and produced in many other countries, although in Russia the production of these rifles was carried out at both the Tula Arms Plant and Izhmash.

The AK74 was developed in the early 1970s, again by Mikhail Kalashnikov, as the replacement for the earlier AKM. It uses a smaller 5.45x39mm cartridge, replacing the 7.62x39mm chambering of earlier Kalashnikov rifles. The AKS74 (the ‘S’ standing for Skladnoy, or Folding), was developed in tandem with the full-stock version of the AK74 and was equipped with a side-folding metal stock; it was developed primarily for use by airborne infantry. Both variants first saw service with Soviet forces in Afghanistan during the 1980s, and continue to be used by the majority of countries of the former USSR.

In 1973 though, a design competition was initiated in the Soviet Union to find a fully automatic carbine, which was a trend at that time. Like many designers though, Kalashnikov had the idea to make an even shorter carbine variant, almost a submachine gun, that retained the rifle chambering for commonality of use in relation to ammunition and spare parts. Kalashnikov was already quite a long way down the development path with his own design and although a number of other designers put forward competitors, it was the AKS74U (‘U’ for Ukorochenniy, or Shortened) that was adopted. Initially, the carbine was issued to a few very select units, but by 1979 it was far more widespread, being fielded by Special Forces, airborne infantry, rear-echelon support units and vehicle and helicopter crews.

The carbine’s compact size was achieved by using a side-folding stock, exactly the same as that used on the AKS74 and a short 206.5 mm (8.1-inch) barrel with a re-designed gas piston operating rod. Due to this re-design, the cyclic rate of fire rose to a hefty 700 rounds per minute, so in order to stabilise rounds, the barrel’s twist rate was increased to adapt the AKS74U for muzzle velocities in excess of 720m/s (2362fps). A new gas block was installed at the muzzle end of the barrel, with a muzzle booster and conical flash hider, which gave the 74U a very distinctive appearance.

The size reduction as a whole resulted in a very small, relatively lightweight, effective and highly manoeuvrable weapon, but one that needed upmost respect from the user. Such a short carbine, which makes use of the 5.45mm round used in the full-size rifles, is a bit of a handful to say the least, and the extreme muzzle blast and recoil soon earned the AKS74U the nickname of ‘suchka’ or ‘little bitch’!

When the delivery arrived at the office, I was immediately surprised at how heavy it seemed; the real SU weighs in at 2.7kg/6.0lbs and the replica comes in at 3.2kg/7.05lbs, the slight additional weight being down to internal parts that don’t need to be there in the real world. There is also another reason for this weight, and that’s because the E&L replica is 100% full steel and real wood; not only do E&L have ‘real steel’ plant for the metalwork but they also have a complete woodworking shop, where the wood parts are scrupulously finished to the highest standard by a carpenter’s hand. The wood parts are first boiled in oil to dehydrate them, and then subjected to seven different processes before final staining and a hand polish; I’m going to say it, but the wood parts are probably better finished than you’d find on a real AK!

Not only are the E&Ls beautifully finished externally, but inside things are equally precise. First up, you have CNC steel gears and 9mm bearings, a one-piece CNC steel cylinder, a super wear-resistant POM piston with silent piston head, and a high-torque motor; all the wiring throughout is high quality, low resistance silver cord. Basically, everything just oozes quality and that’s not surprising, as allegedly E&L are using very high quality internal parts from the Japanese market; you can expect the internals to be interchangeable with others out on the market, but what you see inside the Type 3 gearboxes is super tensile pistons and tappet plates, and that high torque motor, which will easily support power upgrades.

This SU feels like it’s literally just come out of the Tula factory! With the distinctive conical flash hider and booster at the sharp end, and the folding stock at the other, it almost has that factory-fresh feel about it, and it arrives very lightly oiled, so you even get ‘that smell’; E&L go as far as supplying a green plastic oil bottle as part of the deal, which indicates to me that the externals will need to be kept maintained. In addition to all the usual features, the E&L is neatly finished off with a side-mounted sight rail and a faux- ‘Bakerlite’ pistol grip as standard. What a package!

Given that the internals are of the finest quality, I had no doubt that out-of-the-box performance would be right up with the best of them, and I wasn’t to be disappointed! Using .20g RZR BBs, the SU delivered a massively consistent chrono reading of 1.1-Joule/345fps which is absolutely perfect. Although I like to confirm published power levels myself, I was immensely impressed that the SU also arrived with a certificate of compliance from the factory, and that under the top cover was a sticker confirming that it was fitted with an M100 spring; I personally have never seen this before, so NUPROL were not joking in any way when they told me that every E&L they distribute will be CE Approved and fully UK compliant. Way to go guys!

In my experience, airsoft SUs have bizarrely, given their relatively short inner barrel, been insanely accurate, and it’s one of the reasons why I love them so much. With the 120BB ‘Bakerlite’ mid-cap magazine topped off, it was time to set the hop, and the ‘slide’ adjuster is easily accessed by simply pulling back the charging handle. Like all AKs, the SU has the lever fire selector with up being safe, mid-point being full auto, and fully down being semi; with semi engaged, the E&L went off with a right ‘crack’, sending BBs unerringly to target at 30m. Cranking up to full and this just increased the number of BBs going downrange, without eroding accuracy one iota.

With a retail price of around £300, this is one hell of a performer; okay, I am biased because I love the SU so much as a model, but after owning many I have to tell you that this is genuinely one of the very best I’ve ever come across. The externals are absolutely sublime, the internals are the very best they can be, and the performance is stunning. Would I replace my beloved ‘gasser’ with one of these E&L Airsoft AEGs? Frankly no, but I will certainly be adding one to the collection for the days when the gas doesn’t cut the mustard; this little AEG has honestly been worth the wait!

My thanks got to www.nuprol.com for the loan of the test sample, and once they get the distribution rolling, expect to see E&L Airsoft models in all good airsoft retailers!