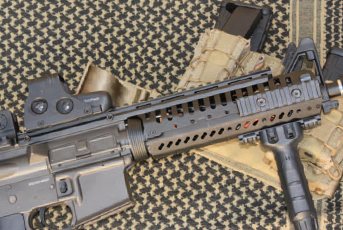 Once upon a time, and not so long ago at that, a full metal airsoft replica was not only hard to find, but if you could lay your hands on one you were going to be laying out a hefty chuck of cash to get it. In the last five years or so though it has been “all change” and pretty much every manufacturer has full metal models in their range, including Evolution Airsoft from Italy.

A short while ago my fellow airsofter Rob Drury put together a great overview on the licenced “Lone Star Tactical” series from Italian company Evolution Airsoft, so I thought that this month for our field test I would put their Ranger SBR (Short Barrelled Rifle) through its paces and see how it worked out as a skirmish rifle under realistic conditions.

Let’s get the basics out of the way first; licensed trademarks and design, with a unique serial number, check. Anodized aluminium body and CNC machined one piece barrel, yup. High torque motor, steel gears in a sturdy V2 gearbox, reinforced piston, 7mm radial bearings, metal Hop Up, again all present and correct. All in all internally a pretty good package; agreed nothing here is going to set the airsoft world alight but it’s all functional and hard wearing, just what you want from a gun to be used week in, week out.

What none of this addresses though is what you really get for your money, as there’s a lot going on here if you look closely. One of the pre-requisites in the licencing agreement between Lone Star Tactical in the USA, who make top notch real firearms for competition level use, and Evolution was that any replica bearing the Lone Star logo should be constructed to the very highest level of quality in their build. Hefting the Ranger SBR you are immediately aware that you’re holding onto something that is built to last!

The upper and lower receivers, finished in a nice dark grey, are extremely solid with no movement or gaps discernible between them. All of the other parts are finished to uniform matt black, which gives the carbine a visually stunning look. All logos and trades are very well achieved. The external parts are where things really start to get interesting though.

First up let’s take a look at the rail system, because what you get here is pretty surprising. Essentially the front rail system is a replica of the CASV-EL system from VLTOR; there are no trademarks on this but the setup is unmistakeable; the CASV system is a freefloat drop in accessory, and the smooth main body allows mounting points to be easily setup in multiple configurations. As with the real deal the replica comes with a set of rail sections that can be simply screwed onto the main body just as you like.

At the back end of the carbine it’s a similar story as there’s a very nice take on the VLTOR ModStock as well. Again this is unbranded but it’s definitely a copy of the AIB-MCB IMod with a QD sling swivel included. This comes with two sets of cheek pieces which are easily changed out to give you a personal fit. There is next to no movement between the stock and the buffer tube, which offers six positions so once again it’s easy to personalise.

The last components which make the Ranger SBR look a little different are the pistol grip, a replica of the ergonomic Tango Down Battle Grip, a Tango Down style foregrip, and on the sharp end a replica of the Noveske KFH Sound Amplifier. Starting to add all of these bespoke external parts up, the Ranger SBR really does appear to give great value, as a real CASV-EL alone will cost you US$239.95 before you even think about shipping and the dreaded import duty!

How Does It Perform?

So, what we have in essence is a solidly built carbine with some workmanlike internals and some eye catching externals, but how does this all come together in relation to your weekend skirmish? In a nutshell, excellently!

The Ranger SBR comes with a 300 round metal HiCap magazine that worked very well out of the box. I tried various other magazines and all of them functioned perfectly, so if you like your mid or Realcaps you’ll have no issues with this AEG. Fitting a 7.4 volt LiPo battery is simplicity itself as the bottom section of the rail system hinges downwards by pinching together a pair of pressure plates at the front; this means that changing batteries during a game is easily achieved with no tools required.

With the stock set at position five the carbine worked well, even when wearing a plate carrier, shouldering easily. The metal rear sight and ‘A’ Post at the front were easily acquired. The Hop Up is easy to access; pulling back the charging handle moves the “bolt cover” to the rear and the hop wheel is exposed. Once set, palming the bolt release sends the cover forward again.

Tested with .20g G&G PSPB bbs resulted in a respectable and site friendly average of 324fps which means this AEG is usable straight out of the box; nothing over 331fps was experienced, but obviously you should chrono your individual model before use.

Once the hop is set this little carbine was ranging accurately out to a good 25-30m, so in my opinion it will be great for CQB where engagement distances are lower. I fitted an EoTECH 511 to the top rail which in my opinion is the perfect “close in” optic, and a Klarus XT11 taclite in an Element mount. All accessories slotted on perfectly. The only change I made to the carbine was a personal one, in that I fitted a singlepoint sling plate; this was easily done in about ten minutes by simply releasing the buffer tube and replacing the stock plate.

Over the course of a days gaming I experienced no issues with the Ranger SBR whatsoever; at no point did it stutter or misfeed, each and every bb leaving the barrel with a satisfying “crack” courtesy of the sound amplifier. If you don’t fancy this, then the outer barrel is threaded 14mm CCW which means that any suppressor or flash hider could be easily substituted. The trigger is crisp with minimal take-up, so getting off swift semi-auto shots was easy, again perfect for CQB work.

All in all, my time with the Lone Star Ranger SBR was a very positive experience, so much so that I may just have to add one of these cracking little carbines to my own collection. I’ve a couple of SBRs already, both of which are pretty heavily upgraded; the Ranger SBR gives both of them a run for the money as a stock gun, so I can’t really say anything negative about this super little AEG. I will say well done to Evolution Airsoft though, as the growing reputation they have for building quality airsoft replicas is very well deserved - certainly if this little cracker is anything to go by!

My thanks to www.G1098supplies.com for the loan of the test model.