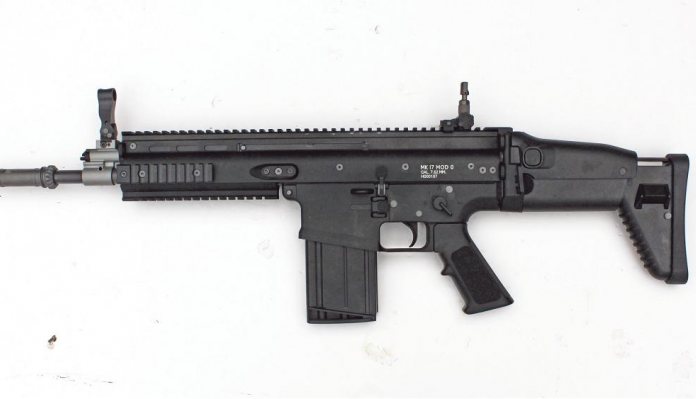 As I’ve often noted in my reviews on rifles that came about in the latter part of the 20th Century, there was a real race to find smaller calibres from virtually every military user in the world; for NATO that was the 5.56x45mm round, and for the might of the Soviet Bloc the 5.45 x 39mm. The rise of conflicts seen in builtup and urban areas, with much diminished engagement distances, as well as the increased adoption of troop deployment from vehicles and helicopters, meant that it was seen as the way forward to ditch the big old ‘7.62s’ in favour of a smaller round, and in most cases a smaller rifle.

However, as we entered the 21st Century, it soon became apparent that many of the forces we were battling against were themselves, in the main, fielding older weapon platforms like ageing AK 47s or AKMs still using the old Soviet 7.62 x 39mm round, and although the rifles themselves were old and the quality of ammunition variable, quite often NATO or Task Force Troops found themselves being outgunned, certainly at middle distance engagements, which could be a life or death struggle, especially for Special Forces personnel with little back-up. You only need look at the movie ‘Black Hawk Down’ to see what I mean.

There were numerous stories of the SAS in the Gulf War returning to the venerable L1A1 SLR, to add to the weight of fire provided by their smaller calibre M16s in the desert, where engagement distances widened out considerably; for the US troops, the model that came into play was an updated M14, but it was really in 2000 with the creation of the Mk 14 Mod 0 Enhanced Battle Rifle (EBR) that things got going. After a request from the United States Navy SEALs for a more compact, larger calibre ‘battle rifle’ in 2001, Mike Rock Rifle Barrels, Inc. was asked by United States Special Operations Command (USSOCOM) to participate in a SOPMOD conference to create what would be the Mk 14 Mod 0 EBR, with features that included a collapsible stock, an aluminium body, and a rail system.

Indeed, it was the United States Navy SEALs that were the first forces to be armed with the EBR in 2004, followed by the U.S. Coast Guard. The U.S. Army was also being armed with the M14EBR-RI, so a whole new era of 7.62mm came about. At the same time though, USSOCOM issued a solicitation for a family of Special Forces Combat Assault Rifles, shortened immediately to SCAR, designed around two different calibres but featuring high commonality of parts and identical ergonomics. FN Herstal took part in the, for once, full and open competition, where nine manufacturers submitted twelve different designs for the new weapon systems, and released prototypes of a brand new family of weapons within the tight time constraints, taking full advantage of their longstanding firearms know-how; from the first pre-selection tests, the FN SCAR system developed by FN Herstal has remained the first and only choice of USSOCOM.

The FN SCAR-H CQC assault rifle is chambered in 7.62x51mm NATO calibre and is fitted with a short 13-inch barrel for close quarter combat. The user however can replace the short barrel with a standard 16-inch barrel in less than five minutes if the mission requires engagement at longer distances. The rifle is then called FN SCAR-H STD. The FN SCAR-H CQC assault rifle can be fitted with an FN40GL-H grenade launcher, mounted on the lower rail of the rifle, for additional firepower.

The SCAR-H is a highly adaptable platform, as it features a foldable buttstock, an adjustable cheekpiece (two positions) and an adjustable length of pull (six positions) to adapt to any user. It also has a reversible charging handle and an ambidextrous safety/firing selector and magazine release, so that both right and left-handed users find it straightforward to operate. It weighs in at no more than 3.590kg (without magazine) and does not exceed 645mm in length with the folded buttstock. The SCAR-H features an upper Picatinny rail for optional day or night optics systems, and lower and side rails are in place for optional accessories such as a tactical light, laser designator, or foregrip. Other accessories are available, such as sling, bipod, carrying bag and blank firing system.

Emerging from the U.S. Military’s FN SCAR program, the current MK 16 (5.56mm SCAR-L) and MK 17 (7.62mm SCAR-H) weapon systems use a common multi-calibre architecture that is highly modular and instantly adaptable to virtually any mission requirements, and is further enhanced by the MK 13 grenade launcher. The FN SCAR is serving on the front lines with America’s Special Forces personnel worldwide and comes full circle to the core principles of the true military marksman.

Stepping On The Gas!

In my opinion, NUPROL are providing some of the best WE gas airsoft replicas available today. I own four myself and each one of them functions superlatively. WE’s gas system has become the ‘one to beat’ in relation to the very best full bolt systems, especially since they’ve progressively tweaked and worked on their open bolt technology to make it best of the bunch.

Like the real thing, the advanced design of the SCAR-H replica gives it magazine release on both sides, a fire selector that is also ambidextrous and a charging handle that can me moved to either side. This modern style has the newer design stock, with multiposition, adjustable length and ability to fold down to the right side; in addition, the cheek rest is adjustable to either a flat or raised position. The front end has rails ‘around the clock’, adding plenty of potential for adding accessories, again just like the ‘real deal’. With their full metal and polymer SCAR replica, WE have created something that feels very solid and robust, a fairly common feature on gas guns, as unlike AEGs, their bodies are built to contain actual mechanical forces and are not just a basket to hold a gearbox. Besides, the realistic action and real cap magazine, it also field-strips like the real thing.

The length, 878mm, and the weight, 3.4kg, along with some superb ergonomics, make this a great replica to manipulate, as it comes into the aim easily and is quick and easy to transition from target to target. The open bolt in this rifle makes it pretty darn realistic and the WE technology really kicks back and forth with a great ‘slam’ with every trigger pull. The replica also has a last-round cut-off feature, which is excellent, although you can switch this off by simply flicking a lever on the top rear of the magazine.

With an inner barrel that runs almost to the end of the outer barrel, running NUPROL 4.0 Ultimate Power Gas through the 31rnd magazines allows you to launch 0.20g 6mm BBs downrange at around 1.79Joule/440fps, which makes it a superb choice for a DMR locked to semi-auto for MilSim. Alternatively, fitting an easy to source NPAS (Negative Pressure Air System) Kit will allow you to dial down the power to a more site-friendly level for full-auto skirmishing.

Although the replica comes with perfectly acceptable, and fully adjustable, flip-up iron sights front and rear, I set up the SCAR-H as I’ve often seen it configured in the ‘real world’ with a 1.1-4x25 MilDot scope on QD mounts, a PEQ 15 laser designator, stubby foregrip and one of the new NUPROL BOCCA series MAMBA suppressor models, so the whole thing looks exactly as it should. With everything on-board, I loaded the magazine up and set to work on some plate targets at 30m; with the rotary hop that’s located just inside the chamber set, within seconds all ten plates were over and it was time to re-set. Using just one magazine of 30rnds I managed to get the hop set and take down two sets of ten plate targets, which is darn good going for a rifle that was nigh-on fresh from the box!

All-in-all this is one cracking replica! Not only is it as true to the real thing as it can be, but it’s beautifully made, and flawless in operation. NUPROL offer two models of the SCAR-H, one in plain black and the other tan, but in terms of operation they are both the same, so it’s purely down to which colour you prefer. The rifle comes in under the magic £350 mark, mainly retailing for around £340, which is a brilliant price for what you’re getting. If you’re considering your first gas blowback rifle, then I have to say that I’d check this one out soonest!

My thanks as usual got to www.nuprol. com for supplying the rifle itself, along with gas and accessories for this review. For more information and dealer listings please just check out their website.