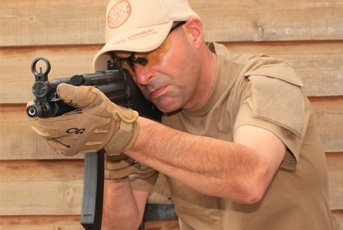 I regularly use the word “iconic” about airsoft replicas I review and it must be said that I do have an eye for something a little different. To me the Heckler & Koch MP5 is indeed an icon; none of us of a certain age will forget the events of 5th May 1980 when a group of black clad figures appeared on the balcony of the Iranian Embassy in London to launch “Operation NIMROD”, or the fact that they were pretty much all armed with a diminutive yet deadly looking machine pistol!

So began my youthful affair with Heckler & Koch. I remember going to school and the talk amongst my friends and I was all about the bravery and professionalism of the soldiers from the SAS, and all about their gear of course! We soon discovered that the firearm in question was the H&K MP5 and for a then 15 year old army cadet more used to a bolt action Lee Enfield it did indeed become an icon.

The MP5, or Maschinenpistole 5, came into being during the 1960’s due to the success of Heckler & Koch rifles and was largely derived from the earlier HK54.

Manufactured largely of stampings with plastic furniture, and chambered for the reliable and effective 9 x 19mm Parabellum cartridge the MP5 has always been a well constructed firearm, and in 1966 was adopted into service by the Bundespolizei and Bundes-Grenz-Schutz (Border Police).

The MP5 though went on from strength to strength, rapidly gaining acceptance by further police and military special operations units; adoption by the German GSG-9 Counter Terrorist Unit obviously brought it to the attention of the SAS, although they’d probably already evaluated it anyway, and so it was that it came to appear on the balcony of the Embassy at Princes Gate in 1980.

The MP5 has gone on to be the favoured machine pistol for professional users worldwide, and a simple search will show it in the hands of Special Forces from tens of nations. The development process for the MP5 has been constant and unrelenting, with variants in different styles, lengths, and calibres cropping up as operational needs have dictated.

If you speak to anyone who has been playing airsoft for any length of time they will probably tell you that they own, have owned, and probably will own another, MP5 variant. When I moved out to the USA in 2006 the international movers were loathe to put my then meagre collection of M4s and handguns into the container for obvious reasons. I ended up selling the lot to friends before I left the UK and putting the money away for when I arrived in Florida. Once there I discovered that airsoft was actually booming and that the choice of replicas was simply mind boggling to someone used to pretty much only Tokyo Marui and the fledgling Classic Army models.

And so it came to be that my first ever airsoft purchase in the USA turned out to be an H&K MP5 with a sliding stock, with a Glock 17 to accompany it, and both replicas in one form or another have been in my armoury ever since. It’s a great replica to kick off your airsoft gaming with, short and light and very easy to use, and these days you don’t need to pay the earth to get a good one either. If the MP5 is good enough for our “Boys in Black”, then it’s certainly good enough for us!

Enough background, let’s get onto the review proper! Guay & Guay (or simply G&G to most of us) have been around for a considerable amount of time. Starting out in 1986 they’ve been consistently involved in the business of building airsoft replicas, and have suffered the trials and tribulations that all manufacturers go through. Luckily for us, and thanks to an increasingly good quality control program, what comes from them in Taiwan these days are increasingly innovative and reliable airsoft guns.

G&G have become a major presence on the airsoft scene, and every trade show has them launching something new year in, year out. They work with numerous models and variants of firearm models (just have a look at their website www.guay2.com to get an idea of the sheer size of their range!) at two levels, “GT Advanced” for their premium models, and “CM Intermediate” ( “CM” standing for Combat Machine”) for their more basic, but no less reliable, entry level models.

The “EGM A4” is from this Combat Machine line, designed, but not exclusively, for those new to the game that want a solid, reliable AEG that’s not going to break the bank; it’s most definitely an MP5, but not called that due to licencing issues. Getting the “techie bit” out of the way for those that need to know, this MP5 replica is made from a combination of aluminium (6061), steel, and fibre glass reinforced plastic. It has an overall length of 714 mm, an inner barrel length of 233mm, and weighs in at 2060g. Internally there is a Version 3 gearbox featuring G&Gs Pneumatic Blow Back System, with 8mm oil-less bearings. The motor is G&Gs reliable 16000rpm Hi-Torque Long Axis model.

Now there’s a bit of a giveaway in the list above that there’s something a little unusual about this replica; the Pneumatic Blow Back System. G&G go to great pains to make their replicas unique and give them features that you’d find on the “real world” firearm. Now “blowback” functions are nothing new and have been around on various models, but normally most airsofters I know have immediately disconnected the mechanical “tow hook” system which historically has led to the early demise of a gearbox! G&G obviously wanted the “blowback” and their innovative solution uses a patented compressed air system which is piston driven rather than mechanical to avoid putting extra stress on the gearbox. This is a neat system that works very well, and gives that little tiny bit more “realism” to the airsoft experience!

So, this little MP5 replica has definitely got some unique features, but as always what’s important is how it performs! The EGM A4 comes with a large battery compartment in the butt which really hearkens back to the days of NiMH batteries; a decent 9.6V which would last you all day was a cumbersome thing as you’ll see from the pictures, and the A4 even comes with a large Tamiya style connector; luckily I had a couple of old batteries lurking as I run LiPo batteries exclusively these days. Personally I’d have the “airsoft tech” change the connector to Deans and run it on a 7.4V LiPo which has less bulk and weight.

That’s my niggle out of the way! Now some might say that having a plastic body makes an AEG somehow “less” in the eyes of the purist, but I’d say at this level it’s more than adequate. Let’s face it, there are real firearms out there in the hands of numerous armies that are of polymer construction these days, and the material that the A4 is made from is good and solid with no creaking or twisting apparent. It feels sturdy and good in the hands. All the important parts, such as trigger, magazine release and muzzle are metal, as is the supplied 40 round magazine. The muzzle comes with a cover threaded 14mm CCW which means if you want to fit a suppressor then you’re good to go. I already own one of G&Gs excellent Rechargeable Tracer Units, which are GREAT for night games, and this fitted perfectly.

The fire selector is also very positive with a nice “click” sounding when you move it from “Safe” to “Semi” to “Full Chat”; like the real MP5 these functions are depicted with pictograms, and the selector switch is fully ambidextrous. Talking of “clicks” the magazine makes a very, very satisfying sound when seated. The sliding Hop-Up lever is found beneath the ejection port cover and is accessed by pulling the cocking handle mounted forward left above the handguard to the rear; this can be pushed up and locked in the open position so getting to the Hop-Up lever is simplicity itself. To adjust you just need to move the lever fore or aft, with the foremost position being “normal”.

With a large NIMH battery finally charged and installed it was time to get on the range, and I have to say this inexpensive little replica was NONE too shabby. The front sight is an easily acquired protected post, with the rear being a fully adjustable drum, so it’s easy to get quickly on target. Semi auto resulted in more than acceptable accuracy out to 30 metres or so, with the .20g PSBP BBs that G&G supply with the AEG as new; you get a little bag of 1,000 rounds which is more than enough to keep you entertained for a while. Chrono on the same BBs gave a very respectable and site friendly mean of 326fps.

It is when you flip things onto fully automatic though that this MP5 starts to “sing”, with the Pneumatic Blow Back System really coming into its own. The trigger is nice and crisp and it’s easy to deliver controlled bursts; I defy anyone not to have a smile on their face as the BBs head off towards the target and the blowback clattering back and forth!

The G&G EGM A4 package comes with a 40 round magazine, 1,000 G&G high grade BBs, a barrel cleaning rod, and a full English colour instruction manual. Priced with an RRP of £130.00 this is a LOT of AEG for the money, and I don’t think that anyone is going to be disappointed with its performance; I certainly wasn’t!

My thanks go to Swindon Airsoft for providing the review sample; please visit them at www.swindonairsoft.co.uk or call them on 01793 435999 for more information on the G&G EGM A4.