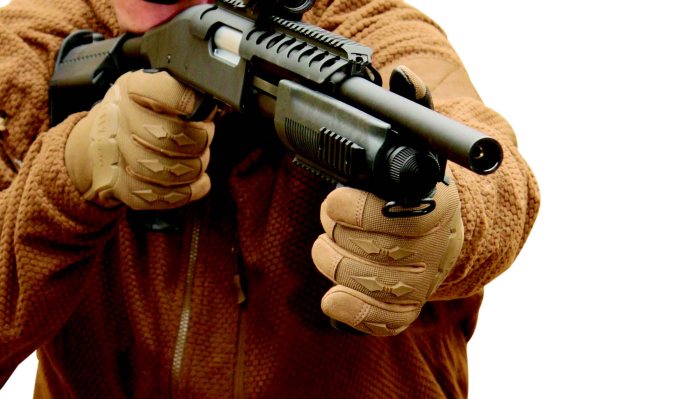 I read with interest when I started to research this month’s review that on the 13th of April 2009 the 10 millionth Remington 870 shotgun was produced; yes, you read that right, there are now over 10 million of these wonderful shotguns in circulation and Remington just keep on building them!

The popularity of the 870 series is down to its simplicity, rugged construction and reliability. Speaking to many friends in the USA, virtually every one of them owns an 870 of one flavour or another, be they sporting shooters or individuals who carry firearms in the line of duty. Available in 12, 16, 20, 28, or .410 bore they are extremely versatile and the number of aftermarket parts available for them is an industry in itself.

In my opinion every airsofter worth their salt should own a good-quality springpowered shotgun model. There’s no battery to contend with, no gas to vent on cold days, just a big old spring that’s cocked by the pump action. Spring guns have very, very little that can go wrong with them and they can be easily upgraded with the minimum of parts; simply change the spring to raise or lower the power and install a tightbore barrel to improve the accuracy.

Whatever type of airsoft you’re involved in, a good spring shotgun is a great investment and the G&P Wingmaster has always been one of my favourites What’s in a name?

The Wingmaster model was developed as a sporting gun, so it’s quite unusual for the G&P series of replicas to bear this nomenclature; in fact if you search on the Remington website for tactical shotguns it’s actually the Model 870 Express which is used for the basis of them rather than the Wingmaster but this can honestly be forgiven as the quality of the replicas is simply stunning.

The basic G&P 870 looks identical to the current Express Tactical model. It’s full metal throughout apart from the parts that in real life are polymer; these are smooth finished in a very good-quality matt black plastic that show minimal moulding lines.

The metal parts are all satin finished to a very dull black and the whole thing feels solid and dependable in your hands. There is a manual ‘push through’ safety on the rear of the trigger guard, coloured red when the gun is in fire mode. The short model magazine holds 22 BBs (spare magazines are available at minimal cost), although longer, higher capacity magazines can be purchased as aftermarket parts; to me though this spoils the attractiveness of the 870 as when inserted the short magazine just looks like the plate of the loading port.

In action the G&P 870 is an absolute beast sending NUPROL .20g BBs downrange at an impressive 382fps (max), and you can send them just as fast as you can pump the silky smooth action. I did some unsupported accuracy testing at 15 meters, probably the maximum for most CQB encounters, and all 22 BBs ended up in tight circle no larger than a £2 coin!

Taking the range out I was easily able to hit a sandbag at a good 50 meters; this thing is absolutely no slouch, and upping to a .30g BB gave a super flat trajectory with minimal loss of range. Impressive, especially considering the G&P has a fixed hop!

The entire G&P Wingmaster range uses the same core ‘guts’, but then takes things in numerous directions, both classic and thoroughly up to date. The Original model is just that, a basic Model 870 with no frills. This was originally available with a short, medium, or long length barrel and either a fixed butt or simple pistol grip. A pistol grip medium barrel variant was also produced with an integrated tactical light. The long barrelled version with the over-folding butt and extended tube gave that real movie look, and for all the pistol grip models you could change that out for a full butt using a dedicated butt stock kit if you so desired.

The final model of the original variants is the M870 ‘Mad Dog’ Shorty which was a favourite breaching weapon for Law Enforcement personnel globally. This little devil is only 515mm long and features a pistol grip on the rear with a pistol grip slide on the business end, as well as a ribbed, reinforced outer barrel. If you fancy yourself as Tubbs or Crockett then this is the one you will want!

Coming bang up-to-date there are three models that feature everything you could possibly want, with the same superb performance as the originals. Two are based on a VLTOR-like sliding stock/buffer tube arrangement that comes with a rubber buttpad and a QD sling swivel. The pistol grip is softer and more advanced than the original models, and you can change out the front and backstraps so it fits perfectly in your hand. A Knights’ style top rail is fitted allowing you to mount all manner of optics, and the slide features a long rail at six o’clock with two shorter sections at three and nine o’clock. The third model still has the top rail but loses the more advanced pistol grip and the slide rails; what it gains though looks to be a fine replica of the telescoping stock developed by Sage International!

If you go to the G&P website you’ll see lots of superb shotgun parts, which, although hard to get hold of, would allow you to transform your own shotgun in numerous ways to make it unique; there’s even a body kit which can transform one of the original short barrels into a thoroughly accurate ‘Masterkey, which, personally, I’d love to have under one of my M4s.

Normally the G&P model 870 series models are going to set you back some serious moolah, and even then they are worth every penny! However, Land Warrior Airsoft have managed to get hold a job-lot of the different models in one go and are currently offering some staggering deals on them. My advice to you is snap up whichever takes your fancy sooner rather than later as at the prices offered they ain’t going to stick around for long. Head on over to www.landwarriorairsoft. com, type ‘SHOTGUN’ into their search box, and treat yourself to some epic G&P goodness at cracking prices!