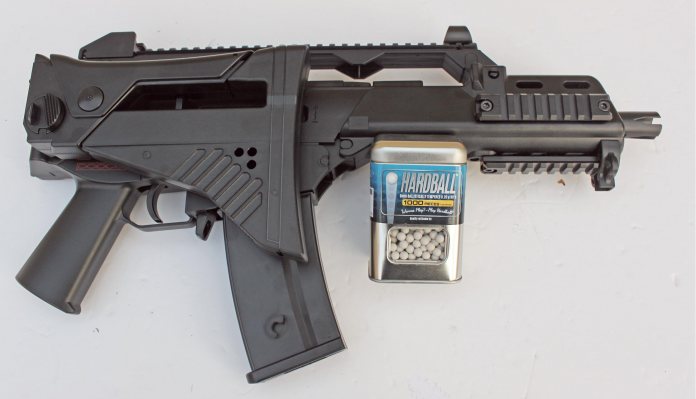 Many of us who have been involved with airsoft for a goodly length of time will no doubt have invested considerable sums of money in our replica carbines, rifles and pistols, but we all started somewhere and for me that was a cheap MP5 electric gun completely made of plastic. That little H&K served me very well indeed, though; okay, it didn’t have the best range or rate of fire but I used it judiciously in skirmishes, understanding its limitations.

Over the years I have learnt about what makes a good airsoft replica, and what makes a great one. Most airsoft replicas are perfectly serviceable out of the box these days, performing as well as the customised and upgraded versions from just a few years ago. I’ll also state that I’ve seen fit, ‘go at it’ youngsters new to the sport dominate the field with cheaper plastic guns, just because they had the vim and vigour to take the fight to their opponents; it’s not about the gun sometimes, but about the skill, determination and enthusiasm of the individual.

Many younger players, unless they have a mother or father who is into airsoft as well, will probably have to start out with a budget airsoft replica, but these days that doesn’t mean that they will be hopelessly outgunned by older players that have more money to throw at their game. There are some great, well-priced replicas out there that will happily let you ‘get your game on’ without breaking the bank and one of these is amongst the latest releases from Umarex, the Heckler & Koch (H&K) G36C IDZ (IdZ), distributed in the UK by ARMEX.

The H&K G36C will probably be instantly recognisable to many of you, as it’s one of the firearms that our armed Police Officers use; I’ve seen them being carried at airports and major train stations, and they stand out due to their modern, almost blocky look.

The G36 is not by any means a new design though, as it was designed in the early 1990s by H&K in Germany as a replacement for the heavier 7.62mm G3 rifle. Increasing interest in Germany for a modern service rifle chambered for the NATO-standard 5.56mm cartridge led H&K to offer the German armed forces the G41 rifle which was rejected. Design then commenced from the ground up on a modern 5.56mm assault rifle designated ‘Project 50’ or HK50. The prototype was then trialled, where it was rated higher than the rival Austrian Steyr AUG system, and the final version of the G36 was completed in 1994. Production of the Gewehr G36 began in 1995 when it was accepted into service with the Bundeswehr.

The real G36 employs a large number of lightweight, corrosion-resistant synthetic materials in its design; the receivers, stock, trigger group, magazine well, handguard and carry handle are all made of a carbon fibre reinforced polyamide. The G36 uses 30 round magazines that are moulded in shock-resistant plastic and are translucent, allowing the user to see the ammunition. On the sides are studs which allow for the magazines to be attached next to each other to help with reloading times. The stock has the ability to fold to the side, which can shorten the overall length; the rifle can still fire with the stock collapsed.
There are a number of variants of the G36, and the G36C (Compact) has a shorter barrel than the G36K (‘Kurz’ or Short), and a four-prong open-type flash hider. The extremely short barrel forced designers to move the gas block closer to the muzzle and reduce the length of the gas piston operating rod. The handguard and stock were also shortened and the fixed carry handle of the longer G36 models was replaced with a carrying handle, which integrates a MIL-STD-1913 Picatinny rail. The optical sight found on the standard G36 and G36K models was replaced with a set of rail-mounted detachable iron sights that consist of a semi-shrouded front post and a flip-up rear sight with two apertures of different diameter. The short handguard has three accessory attachment points, the lower of which is often used to site a vertical grip. The G36C was developed and produced in January 2001.

The G36 family has seen action worldwide and in general has proved to be an efficient weapons system. However, there has been controversy in recent years with reports of G36 rifles used in Afghanistan overheating during extended contacts with the enemy. Overheating affected the accuracy of the G36, making it difficult to hit targets past 100 metres, ineffective past 200 metres, and incapable of effective fire past 300 metres. Although German soldiers gave no negative feedback, the German Defence Minister announced on 22nd April 2015 that the G36 had “no future in the German army in its current state of construction”; she did not however exclude the possibility of the army adopting a new version of the G36 if a solution to the overheating issue could be found.

The G36C replicated by Umarex under licence from H&K is the very latest model you would find in the hands of soldiers, rather than law enforcement personnel, as it is based on the model which is part of Germany’s IdZ (Infanterist der Zukunft) or Future Soldier Systems project. The lightweight, 3.6kg, low-maintenance rifle is currently used by the German and Spanish armed forces and the NATO Rapid Reaction Force. The IdZ system also includes the Heckler & Koch AG36 underslung 40mm grenade launcher.

The G36C IdZ features a new stock has a distinct advantage over the original one. It still folds to the side but the latest version incorporates a cheek-riser and the ability to change the length, which was not a feature of the original. The airsoft G36C replicates this perfectly, and in terms of dimensions it is absolutely 1:1 scale.

The G36C replica is constructed almost entirely from plastic, but as the real thing is pretty much all polyamide, the airsoft version can’t really be faulted for that. The plastic used is of very good quality and there are no visible mould lines or deformities. As it is a fully licenced replica, the H&K trademarks and fire selector pictograms are all crisp and exactly where they should be.

Apart from the distinctive IdZ adjustable stock the G36C also features the top rail/carry handle, which comes fitted with plastic replicas of the irons that you’d find on the real deal; these are fixed but perfectly adequate. Three short sections of metal rail adorn the 3, 6, and 9 o’clock positions at the sharp-end, which means you can easily add a foregrip and other accessories should you wish to. The four-prong flash hider and gas block are neatly replicated, again in plastic.

Internally, the G36C has a fair bit going on too, as the IdZ can be operated in either spring or battery powered mode. This is a pretty unusual feature, one that personally I’ve not come across before, but on reflection it’s no bad thing; all too often, especially in relation to novices, players will let their battery run down and suddenly be in the midst of a firefight not able to shoot! At least with the IdZ you can pull back the ambidextrous top-mounted cocking handle and still be in the game, albeit one BB at a time.

The G36C does benefit from an Electronic Blowback system, which functions very well and gives an extra little bit of realism, and by using a new and improved gearbox Umarex claim that the IdZ is capable of around 1000 rounds a minute, which is pretty darn impressive.

In action the G36 IdZ is really good fun and operates extremely well. Pushing through a retained pin at the front of the carry handle lets you slide the forend forward to reveal the battery compartment. The replica does come with a battery and charger, but as usual I’d say ditch these and buy yourself a nice, small 7.4V LiPo and have it charged and balanced at your local site. The G36C comes with a 400 round high-capacity magazine, which is ideal to start out with; aftermarket midcaps and real-caps for the G36 family are easy to find and relatively cheap.

With the battery fitted and the magazine loaded up with ARMEXs own .20g Hardball BBs, it was time to take this little beauty to the range and give it some beans! First I chrono’d and recorded a mean velocity of 231fps, which is a little low but perfectly acceptable if you are buying this as a fast-firing CQB gun, which it is ideal for. ROF was indeed pretty stunning; whether it was 1000rpm I didn’t qualify, but it certainly spits out BBs at a rate of knots!

The hop-up adjustment wheel is found under the bolt cover on the right-hand side and is accessed by pulling the cocking handle to the rear; a nice little feature here are ‘plusminus’ symbols on the body, which show you which way the wheel adjusts. With the hop-up set accuracy at 10 metres it was spot-on, even with the fixed sights and relatively short barrel, with nice, tight ‘£2 coin’ groupings achievable. At longer distance the slight lack of power saw things dropping off after about 25 metres or so, but as I said at the outset, it’s all about knowing your gun and understanding its limitations.

Overall I am actually quite taken with the little G36C IdZ, as it certainly looks great and has all the features that you need when starting out. It’s a slightly unusual replica, given the dualoperating function, but as I said, this could come in very useful in a sticky situation. Given the lower power this would make a perfect CQB gun, and the very best bit about this little cracker is going to be the price, as ARMEX are telling me that it should be retailing in the UK sub-£100, which makes it awesome value for money and perfect if you need a backup!

The G36C IdZ is currently available in black, but tan versions are in the works.