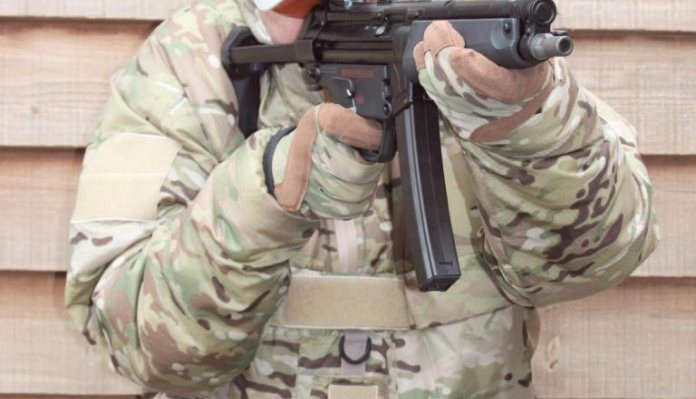 It is often stated that the most iconic and easily recognised firearm in the world today is the venerable AK47, and much as this might be true, in my mind it is very closely followed by the diminutive Maschinenpistole 5 first designed by Heckler & Koch GmBH in 1964.

Pretty much every airsofter I know either owns, or has owned and MP5 replica during their airsofting career and said ownership is somewhat a rite of passage. I have owned early plastic versions, sold them, moved up to full metal versions, and there is still one lurking at the back of the gun room. It rarely comes out to play these days but that little electric MP5 has been with me an awfully long time now, and has been involved in some awesome skirmishes both at home and abroad!

So what makes this little SMG such a must-have for any airsofter? The simple reason is that it has been used by military and police forces worldwide, has appeared in the hands of most screen action heroes and of course was the firearm carried by the SAS on that fateful day on May 5th 1980 when they stormed the Iranian Embassy. It’s been used by the SAS, by the USN SEAL Teams, GSG-9 and virtually every special operations unit in the western world, and even today we see the MP5 in the hands of our firearms trained police officers. Whatever your style of airsoft loadout the MP5 fits it. Nearly 50 years on!

During the early to mid-1960s it became apparent to security forces worldwide that the rise in terrorist atrocities was a trend that they had to counter and for this reason many police and military units started the hunt for a lightweight, accurate, pistol calibre sub-machinegun (SMG). The Germans of course had a bit of a history with SMGs and machine pistols and two companies, Carl Walther Waffenfabrik in Ulm-an-Donau and Heckler and Koch (H&K) GmBH in Obendorf-am-Necker were at the forefront of the development process.

Initially the Walther MPL and MPK (basically a long and short version of the same firearm) seemed to have the edge as the design was already finalised in 1963.
In 1964 though, the first designs of the MP5 from H&K started filtering through, and the rest, as they say, is history.

H&K looked at the successful G3 rifle designs, and then adapted things so make use of the 9x19mm Parabellum pistol cartridge. The MP5 was created within this group of firearms and was initially known as the HK54. First created in 1964, the H&K MP5 was developed as a pistol-calibre, blowback operated roller-locked member of the H&K weapons system, and in 1966 it was officially adopted by the German Federal Police, border guard and army special forces.

The model replicated in airsoft form by VFC under the Umarex brand is the basic 9x19mm NATO (Luger, Parabellum) MP5A3, the workhorse in the extensive family of MP5 submachine guns. Like all H&K firearms the MP5 is a modular design that allows the assembly groups, to include butt stock, trigger group and forearm to be exchanged on a common receiver by the user in the field to reconfigure it for varying mission requirements, mostly without resorting to tools.

The real MP5A3 has an 8.85 inch barrel, is 21 inches in length with the retractable stock closed and weighs only 2.55kg unloaded. It can be fired in some of the variants in semi-automatic, 2- or 3-round burst or fully automatic mode depending on the trigger group mounted and at a cyclic rate of fire of 800 rounds per minute. The Navy variants of the MP5A3 can be fitted with optional suppressors which reduce the sound signature by more than 38 dB and allows it to be fired immediately upon emergence from the water.

In repeated and exhaustive testing the MP5 has proven capable of firing more than 30,000 rounds without a single stoppage or parts failure and it is not uncommon to find MP5s still serving with in excess of 500,000 rounds through the original barrel and receiver!

Still regarded of as one of the most reliable and effective submachine guns in the world after nearly fifty years has seen the MP5 become the choice of the worlds’ most famous elite anti-terrorist, special operations and special law enforcement organisations. While more modern submachine guns have been designed since the introduction of the MP5 it is still the user’s choice when lives are at stake.

As I stated earlier the MP5 is probably one of the most popular airsoft replicas out there, and pretty much every manufacturer offers at least one variant, and some have been fabulous whilst others have most definitely been pretty sour lemons! Developed by Vega Force Company under the H&K licence held by Umarex I am going to come straight out and say that their take on the classic MP5 is probably the best I’ve ever seen!

Vega Force Company (VFC) was founded in 2004, and quickly gained a reputation for a professional approach to creating highly realistic airsoft replicas. The reputation VFC earned was not only from the end users, but also from distributors and license holders around the world. Following OEM experience of a half decade, VFC has a professional team that specialise in project management, inter-cultural communication and quality control. Starting with electric replicas, more recently VFC devoted itself to developing gas blowback (GBB) systems, and attempted to make the replicas highly realistic with fully simulated firearms operation.

Luckily for us a number of their licenced project replicas are based on H&K models. As well as the H&K MP5A2 (with full butt stock) and the MP5A3 (with sliding stock) they are also behind other MP5 variants, G36 variants, and now the H&K 416 and 417. To say that they have made the most of the licencing agreement is surely a massive understatement!

The MP5A3 offered by Umarex shows the result of all the labours put into creating a first rate replica as it is simply stunning. Everything, and I do mean the lot, is truly 1:1 scale and it weighs in at 2.59kg unloaded, just 0.4g heavier than the real thing! Unlike any battery powered electric replica there is no heavy motor and gearbox adding weight to the design but just a cleverly designed bolt which relies purely on the gas in the magazine for operation; if you weren’t told that this is a replica I believe you’d be hard pushed to know the Umarex wasn’t the real deal; in fact you can field strip it for cleaning as you would the original firearm.

The entire upper assembly is of a pressed metal finish just like a real MP5. In addition to the enforced fibre-frame which incorporates the pistol grip and the removable handguard, everything is finished to an extremely high standard. Going right down to the legend Kal.9mmx19 on the left-hand side above the magwell and an individual serial number this replica looks extremely real with just a small 6mm BB notation appearing on the top of the receiver.

In operation the MP5A3 is very straightforward and intuitive. Safe, Semi, and Full Auto modes are clearly indicated by the traditional H&K bullet pictograms on either side of the body, and the safety catch is fully ambidextrous. Sights are simple too with an enclosed post at the sharp end and a fully adjustable dioptre at the rear. The sliding stock is essentially a one position affair, either open or closed but this is true of the real thing as well so you can’t knock the replica in this respect. The magazine release catch sits directly in front of the trigger guard and is easily operated by the thumb of the supporting hand.

As always when you have a superb looking replica you can’t help but mentally wince in case the performance doesn’t live up to the good looks; in the past I’ve seen some truly stunning looking replicas that ultimately spat BBs with all the venom of a lazy worm and the accuracy of a ballista!

Once again, luckily with the MP5A3 its performance is every bit as good as its rakish good looks. A 30 round gas magazine is included in the package (some quote 32 rounds but as the real thing uses 30 I’ll stick with that!) and ARMEX, the UK distributor supplied me with some H&K – branded gas for testing. Loading up is very straightforward, gas in, BBs in and you’re good to go.

One slightly tricky part of getting the replica ready for firing is setting the Hop-Up prior to shooting. Rather than having the traditional wheel, drum or slide of an AEG the MP5 hop is situated beneath the feed ramp inside the chamber so to adjust it you actually have to split the receiver from the body, remove the bolt assembly and use a special tool which comes with the gun to make any adjustment. I did this once when I first set the test gun up and after numerous magazines and hundreds of BBs through the MP5 it has stayed almost set in stone!

With this set it’s simply a case of engage safety, rack back the action and place it held to the rear, insert the magazine and you are ready to rock-n-roll, and this is where the fun really starts. I would always advise anyone with an MP5 electric replica never to engage in the ‘H&K slap’ used to release the working parts in the real thing due to the fragility of the cocking handle; not so with this GBB though as the cocking handle is built like a tank and slams forward with an audible “clack” when you slap it down!

Using .20g BBs the MP5A3 gave a mean chronograph reading of 334fps which was very consistent and obviously perfectly site friendly. As with all gas replicas though the power should be dependent on climatic conditions, but for some reason the H&K seems largely oblivious to either hot or cold (perhaps it’s down to the uber H&K gas?) although I would still chrono it before any games just to be on the safe side; ARMEX also offer a C02 driven magazine as an accessory should you prefer that.

Setting the fire selector to semi-auto and easing the trigger send BBs downrange with an extremely satisfying “crack” and “click-clack” of the cycling working parts. For something with a relatively short inner barrel the MP5 is quite astonishingly accurate, hitting sandbag targets easily at 50 metres. Switching things to full-auto and… oh my goodness me! This thing is a little BB spewing beast; believe me, the first time you use this mode you WILL be shocked by both the rate of fire and the recoil thump you get in the shoulder. Do of course bear in mind that you will blow through gas if you go to full-auto all the time, one charge being just enough to get through the 30 rounds in the mag in this mode.

Overall the VFC designed H&K MP5A3 from Umarex is one heck of a replica, and I can really see it coming into its own in a MilSim or even training situation. It’s not the cheapest replica out there as you can expect to pay iro £330 for one (with spare mags being relatively expensive too) but you are getting an absolutely tremendous amount for you money.

The MP5A3 looks great, is superbly finished and put together and functions flawlessly. It’s honestly as close to the real thing as you’ll find in a replica and this, I believe, will make it attractive not only to airsoft players but also to historical reenactors as a good De-Ac is going to cost a whole lot more. Whichever camp you sit in, as a replica the MP5A3 is nigh on perfect. For further information on licenced Umarex H&K products and for stockist details please visit armex-airsoft.co.uk.