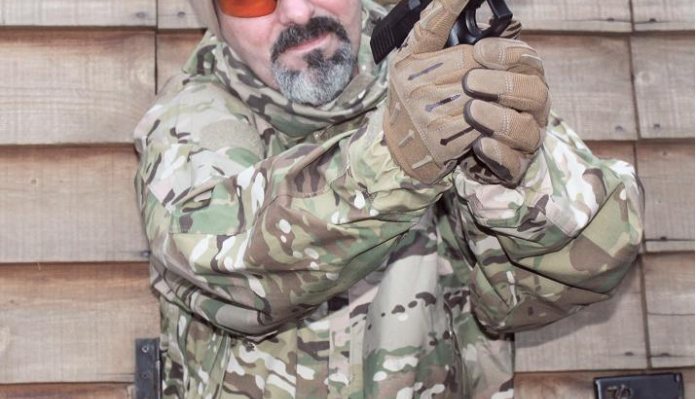 Concealed carry can sometimes be a good thing even in airsoft; some games, especially MilSims, will require you to operate ‘under the radar’ in order to achieve your objectives, so having a small, easily concealed handgun can be a real winner. Most compact, and even sub-compact, pistols are available in airsoft form but the licenced Heckler & Koch (H&K) USP compact has always taken my fancy.

Obviously, H&K are much better known for the rifles such as the HK416, HK417, G36, M27, and of course their iconic MP5 SMG, but they’re no slouch when it comes to handguns. The MK23 SOCOM developed for the US Special Forces was, and still is, a real beast, but the USP line of handguns are quite performers in their own right.

The Universelle Selbstladepistole, or ‘universal self-loading pistol’, is actually a family of pistols developed by Heckler & Koch GmbH in Germany. Design work on the USP began in September 1989 and was initially focused on the US commercial and law enforcement markets. USP prototypes participated in rigorous testing alongside H&K’s entry in the Offensive Handgun Weapon System (OHWS) program solicited by the US Special Operations Command (USSOCOM) which would result in the MK23 Mod 0. The USP prototypes were refined in 1992, based on input from the OHWS trials, and the design was finalised in December of the same year. The USP was formally introduced in January 1993, with the USP40 model chambered for the popular .40 S&W cartridge, followed soon by the USP9, using the 9x19mm Parabellum cartridge, and in May 1995 by the USP45 in .45 ACP.

In addition to a wide selection of trigger/ firing modes, the USP has an ambidextrous magazine release lever that is shielded by the trigger guard from inadvertent activation. The rear of the USP grip is stepped, and works very well with a tapered magazine, making magazine changes faster and more intuitive. On 9mm and .40 calibre USPs, magazines are constructed of polymer reinforced with stainless steel. Magazines on the USP .45 are of all-metal construction. An extended slide release lever is positioned to allow easy operation without changing the grip of the shooting hand.
The USP has been designed and developed especially for military and law enforcement applications, and the results speak for themselves; the USP is extremely reliable in operation, and guarantees high-consistency and precision when firing. As a modular system, it allows individual tailoring of safety and trigger mechanisms to suit any user.

The first USP Compact models appeared in 1994. These are essentially scaled-down USPs, and are available in all of the same calibres as the full-size version, adding .357 SIG to the mix as well. Due to the smaller size of the frame, magazines for the Compact variant may have a handgrip extension to better accommodate the shooter’s hand, although standard flat floorplates are also available for the USP Compact magazines. Despite its small size, the USP Compact is a fully-fledged USP, with the same capabilities. Compared to the USP, the USP Compact provides an additional advantage; it is inconspicuous because it is compact enough to use as an every-day concealed carry firearm, whilst still offering light weight and high-performance.

As Close As It Gets!

One of the things I really love about properly licenced replicas is that you know you’re going to be getting something as close to the real firearm as is possible due to the fact that the airsoft manufacturer will have direct access to the real specifications. Looking at the USP Compact the ‘real deal’ weighs in at 727g and is 173mm long and the airsoft version comes in at 730g/171mm; if that’s not ‘close enough’ I don’t know what is!

Even the trademarks on the Umarex replica are absolutely, 100% spot on, right down to the H&K 9mm x19 on the block and the individual serial number. In terms of finish this is a stunning handgun, with beautifully finished metalwork and seamless polymer; the detailing on the full-metal slide is simply fantastic. In the hand, the weight and balance are superb, and the stippled and grooved grip sits comfortably and securely in your palm. As with the real pistol, the replica comes with both the handgrip extension and the standard flat floorplate, which is a very nice detail; the extension and plate are easily interchangeable.

The airsoft version of the USP Compact also replicates all the features and controls of the real pistol as well. The safety catch sits on the rear left of the USP, is clearly marked ‘S&F’ in red and white in the trademark H&K fashion, and is easily activated using the thumb of the ‘strong’ hand. The oversized slide release sits mid-left above the trigger and once again operates smoothly and positively. The magazine release is semi-shrouded at the lower rear of the wide trigger guard.

Sights are very straightforward and easily acquired with a ‘U’ at the rear and a post at the sharp end; both sights benefit from wellpronounced white dots. To round things out, the replica also benefits from a short accessory rail on the lower front, so that you can fit accessories like tactical lights or lasers should you wish to.

The magazine, correctly of metal and polymer construction, holds 22 BBs, which is a goodly amount and should be enough to get you out of a tight spot! This I charged up with branded H&K green gas and a full complement of UK distributors ARMEX’s own excellent ‘Hardball’ .20g BBs and headed to the range. First off was the chrono test, and the USP performed just as I expected with an extremely consistent mean of 301fps, which means this pistol will be welcome on any UK site straight out of the box. In terms of accuracy, once I had the hop, which is located inside the slide and is adjusted with a special tool provided in the package, properly dialled in, I was easily hitting a small ‘Shoot N C’ target at 10-metres, and still hitting a sandbag consistently at 20-metres; if you’re using a handgun at engagement distances in excess of this then I think you must be ‘living the dream’!

Overall, the USP Compact is a really super little, and I mean ‘litte’, handgun that performs incredibly well, but again, this comes as no shock to me, as the OEM work was carried out by Taiwanese airsoft pistol giants KWA. Whilst not cheap, retailing in the region of £175, the USP is one heck of a handgun and I personally would always pay a little extra for something that is properly licenced. I’m sure, however, that the outright quality and performance of the USP would give you more than enough reason to want one!