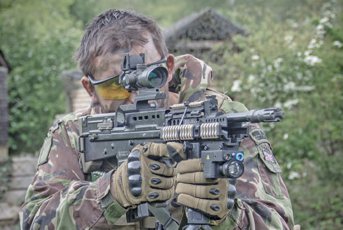 When asked to review the I.C.S. L85A2 I knew that I may just be the right man for the job; as a proud owner and keen advocate of this very model, coupled with the fact that the original British Army issue SA80 remains a firm favourite of mine, I will have to try hard to remain unbiased. This said, I must start with this almost unbelievable but factual statement, that I’ve played 56 consecutive games using this gun with no major issues. Now I’m not talking about standing in the background taking the occasional pot shot - I’m talking full on battles, extreme skirmishes, through every imaginable extreme; howling wind, pouring rain, blazing sunshine and even snow.

This is not to say that the I.C.S L85 is perfect, it’s not, it’s just downright good, so as we move on to the more technical aspects of this replica I will try to go some way as to explain why…

Sometimes known as the SA80, the L85A1/2 individual weapon (IW) has had a somewhat protracted and troublesome service career, mainly due to the transition from development to mass production. It was 1988 before the type was finally accepted for service. Even though production commenced during 1985, from 1988 numerous minor modifications where introduced, none of them making much difference to overall reliability, so in 2001 it was decided that a major rebuild was necessary, resulting in the L85A2.  Most of the modifications where internal, the only external change being the coma-shaped cocking handle; on the L85A1, it was a post.

Made by BAE Systems, the L85A1/2 rifle is a bullpup design, that is the conventional element of butt-stock is removed and the butt plate attached to the rear of the operating parts or action. This design allows for a reduction in overall length while still retaining the traditional length of barrel (circa 500-600 mm). Calibre is 5.56 x 45mm NATO calibre and the gun typically uses 30 round box magazines. It has a cyclic 610-775 RPM rate of fire with a muzzle velocity of 940m/s. Overall length is 785mm and the weight without magazine and optical sight is 3.8kg.

By virtue of its bullpup design it can only be fired right-handed. The upper and lower bodies of the L85A1/L85A2 IW are made from steel sheet-metal stampings, using the modern processes of pressing and welding, CNC and conventional machining. During the manufacturing process each weapon is fully proofed and tested using computer-aided systems. The furniture is plastic, using high-impact nylon. Stripping and assembly are straightforward and can be done without using special tools. The L85A1/L85A2 is a conventional gas-operated rifle locked by a rotating bolt engaging in lugs located in the barrel extension. The bolt and bolt-carrier are fitted with two carrier control rods. A third guide rod located below the carrier control rods is fitted with the return spring. The cocking handle is on the right side and there is a spring-loaded cover over the cocking handle cutout which opens automatically as the cocking handle moves to the rear. The adjustable gas regulator has three positions: a standard setting for most firing, an excess gas setting for use in adverse conditions and a closed position for grenade firing. The trigger group, as is common with bullpup designs is in front of the magazine, and there is a long connecting rod running to the mechanism . On the left side is a selector lever which is set either to semi-automatic or automatic fire.

The L85A1/L85A2 IW can be fitted with a robust high performance optical sight – the SUSAT (Sight Unit Small Arms Trilux) of 4x magnification which enables the weapon to be used operationally under poor light conditions and is also useful for surveillance . The sight is mounted on a bracket that incorporates range adjustment and zeroing. This bracket slides onto a dovetail sight base permanently fitted to the weapon body and which allows sight position adjustment. An emergency open sighting system is also included , being permanently fitted to the body of the primary optical sight. In the British Army the optical sight is only issued to front-line combat troops.

The bullpup L85A2 is now regarded as a thoroughly efficient and reliable weapon.

One of the things that set this replica apart from others on the market is the three stage adjustable spring setting system, although you do have to split the body apart to gain access to the gearbox, this process is surprisingly easy, as you pull out the two N.L (never lost) pins, exactly like the real thing. You then have three positions that the spring guide can be set to, by removing and replacing a single bolt. Using an m110 spring and 0.20g bb’s you can achieve the following (approximately);

The trigger response feels very life like and uses an innovative design that minimizes wiring, thus reducing common wiring issues, batteries can be installed easily using the single button at the front of the hand guard and sliding it forward.  All in all it has excellent build quality and realism.

When removing the gearbox the motor terminals are prone to breaking, as they seem to be very weak, this can be rectified by a technician with a soldering iron and a bit of patience. The hop unit and barrel are quite awkward to gain access to, as you need to remove several small screws, a problem when trying to do a bit of in the field maintenance.

After 10-20 game days arcing on the terminals between the trigger mechanism can cause intermittent failure of trigger response and eventually stop it from working altogether, although this is easy to overcome with simple maintenance and cleaning.  If you don’t know how, it can mean a trip to your local tech guy.

Internally there’s not a great deal more you need to do, other than fitting an m110 spring (as mentioned) for a more user friendly range of adjustment on the three stage settings, and an upgraded hop rubber is never a bad idea.

It’s externally where things get interesting. By removing the carry handle it is easily possible to fit an original SUSAT scope directly to the rail, just like the real rifle in its 1980’s through to late 90’s configuration.

I.C.S manufacture a direct replacement R.I.S rail for this that instantly widens the choice of scopes you could use, but for the ultimate modern day realism, with the acquisition of a tri-rail, riser mount, ACOG (Advanced Combat Optical Gunsight) scope, grip pod, IR unit and a few tan rail covers you could have a near exact replica of the current, British Army, Afghanistan spec, SA80.

It is also important to note that most or the genuine furniture for an L85 fits the I.C.S. version with little or in some cases no modifications.

As you can probably tell, all in all I’ve been extremely impressed with this offering from I.C.S. (I Chih Shivan Enterprise Co Ltd).  The realism and build quality of these classic replicas is hard to fault, and the L85 is impressively standing the test of time. I’m sure we will be seeing them on the skirmishing ground for years to come. My verdict -  9 out of 10

FPS:
Supplied with an m100 spring averaging 300 fps, but this is easily adjustable due to the three position quick change spring system