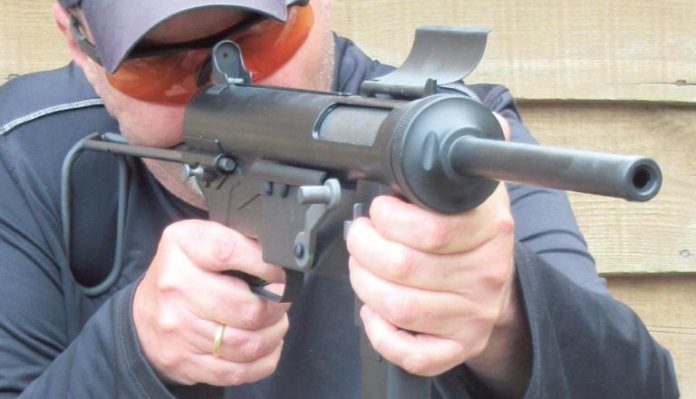 There are several ‘classic’ sub machine guns that will spring to mind; with the MP40, Thompson M1A1 and the STEN undoubtedly coming first and foremost. To ‘gentlemen of a certain age’ (and in this I include both myself and GM Editor Graham!) that were brought up on such comics as ‘Victor’, ‘Warlord’, and the ‘Commando’ series, these military firearms are inexorably etched in the memory, but there’s another one that is in that list and, when it comes to longevity of service, the M3 ‘Grease Gun’ has outlasted them all!

The M3 was intended as a cheap, easily massproduced replacement for the Thompson (much like the STEN) and began to enter front line service in 1944. Disparagingly referred to as the ‘Grease Gun’ or simply ‘the Greaser’, owing to its visual similarity to the workshop tool, it was actually a solid design and worked well, which led to its continued service through Korea, Vietnam, and models were even carried by drivers of the 19th Engineer Battalion attached to the 1st Armoured Division during the Gulf War, as part of their vehicle Basic Issue Items! It is also said that the M3A1 was the initial submachine gun choice for the fledgling Delta Force, who allegedly prized it for its impressively quiet performance when equipped with a suppressor!

What I do know for certain, is that the ‘Grease Gun’ found its way into my heart, and that of many young boys hungering for motion picture adventure on a wet Saturday afternoon in front of the telly, as it featured in the 1967 movie ‘The Dirty Dozen’; when I say ‘featured’, it was in the hands of just about every US character in the movie, and the concept of ‘jungle taping’ magazines together was lodged fully in our minds from then on; come on, if you’re of ‘that age’, tell me that you never did that with your toy guns!

With its stamped, riveted, and welded construction, the M3 was originally designed as a minimum-cost military small arm, one that could be discarded when it malfunctioned and, interestingly, replacement parts, weapon-specific tools, and sub-assemblies were not made available to unit, depot, or ordnance level commands at the time of the M3’s introduction to service; during later 1944, a shortage of new M3 submachine guns forced U.S. Army Ordnance workshops to fabricate parts to keep existing weapons operational!

Following field requests for further improvements to the basic M3 design, in late 1944 an improved, simplified variant of the M3 was introduced, the M3A1. 15,469 M3A1 submachine guns were produced before the end of World War II and 33,200 during the Korean War. It was originally hoped that the M3 could be produced in numbers sufficient to cancel future orders for the Thompson submachine gun, and to allow the army to gradually withdraw the more expensive M1A1 from front-line service. However, production delays and requests for modifications ensued and the M3 was introduced later than expected, and purchases of the Thompson continued until February 1944, but a total of 622,163 M3/ M3A1 submachine guns of all types were assembled by the end of World War II! The M3A1 variant saw little, if any, combat in World War II, but was used in Korea and Vietnam, where it was especially favoured by ARVN and indigenous troops (as well as US ‘advisers’ if the Burt Lancaster ‘Asa Barker’ character in ‘Go Tell the Spartans’ is to be believed!).

The M3 and M3A1 were largely withdrawn from American Forces frontline service in 1959 but continued to be used until the mid-1990s by armoured vehicles crew. Due to the large .45 ACP calibre round, the M3/ M3A1 fired and its simple construction with tamped and pressed steel, it was, and still is, a very reliable, extremely simple to operate and compact firearm, although having had the chance to shoot one belonging to a friend when I lived in the USA, the simple wire stock leaves a little to be desired!

The ‘Grease Gun’ had .45 calibre ‘grunt’, could be well controlled on full auto due to a decreased cyclic rate of fire (450 RPM), was simple to fix and maintain, cheap to manufacture and very easily quietened down using a bespoke Bell Laboratories suppressor, all of which appealed to many in the early special forces and paratrooper communities. The compact size, reliability, and stopping power of this weapon kept it in service with the U.S. for decades and it is still used in some countries, such as the Philippines, to this day!

The ICS M3 submachine gun is a great addition to the WWII family of airsoft guns, and of course covers many years of service, which is of course superb if you only have one airsoft AEG! With the M3, one replica will take you from the Bocage of Normandy, through the jungles and paddies of ‘The Nam’ via the Falklands War (the Argentinians used their homemade version of the M3, the PAM2) to the deserts of Kuwait, and of course it’s no slouch on a skirmish day either!

The M3 was designed by ICS from scratch, with careful attention to detail and quality, and benefits internally from 8mm steel bushings and steel gears, full metal M3 gearbox construction, all moved seamlessly along by the tried and tested ICS turbo 3000 high-torque motor. Their M3 features a steel, adjustable stock that has two settings and the magazine catch and simple sights are manufactured from metal stamping.

The finish on the majority of the alloy-bodied replica is a matt black paint, which is totally in keeping with the ‘cheapness’ of the real thing! The build quality is actually excellent, and everything is metal that would be on the original. The body is aluminium rather than steel, which is actually a plus for weight (3700g), and rusting issues.

Compared to what we’re used to with modern models, the controls are minimalist; there’s the magazine release, which is very positive, and the cocking lever on the right side of the action (this was removed for the M3A1) functions to open the fake bolt and allow access to the M4 style hop adjustment wheel; the lever also acts to decompress the spring and act as the safety in its rearmost position. It’s full auto only (as is the real thing), so it’s the ideal tool for sweeping and clearing, although where sites enforce a ‘no full auto’ in buildings, you may need to resort to your trusty, also .45 ACP, 1911 when things get close! Coming in at 0.89 Joule/311fps on a .20g RZR BB the ICS M3 offers great range and, despite the short 203mm barrel, it’s more than a match for most guns in the woods and definitely good for CQB, where full-auto is allowed, and the supplied 430 BB Hi-Cap magazine will keep you going for a while even if you’re rattling off your shots!

For me, although the wood and metal mix of the Thompson still touches a place in my heart when it comes to WWII vintage airsoft replicas, and the ICS Garand also tempts me greatly thanks to more modern WWII series like the outstanding ‘Band of Brothers’, if you want a single AEG that will let you get involved in WWII, Nam, and even GW1 ‘FilmSim’, games then the M3 ‘Greaser’ is probably the most sensible buy out there and will serve you well straight from the box. Okay, it may not be the prettiest AEG on the field but as Major Reisman says in ‘The Dirty Dozen’, “I never went in for embroidery, just results”!

Thanks, as always, to Fire Support for the loan of this super little ICS AEG; for more information on this model, and the rest of the extensive ICS range please do check out fire-support.co.uk