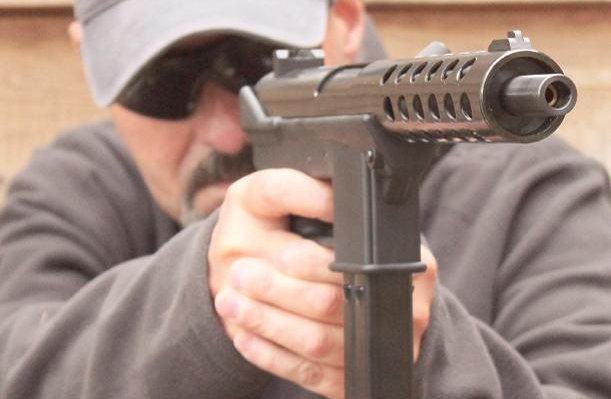 “Just remember what ol’ Jack Burton does when the earth quakes, and the poison arrows fall from the sky, and the pillars of Heaven shake. Yeah, Jack Burton just looks that big ol’ storm right square in the eye and he says: “Give me your best shot, pal. I can take it.” So speaks Kurt Russell in his starring role of the 1986 cult-classic movie Big Trouble in Little China; he went on to prove his point during the movie by showing his knowledge of and skill with firearms by picking up a Tec-9, and although the end result was highly amusing the firearm went down in movie history. It also became part of television history as a model often seen in Miami Vice, a show renowned for its inclusion of unusual and effective firearms, but was cast in not such as positive light as it usually appeared in the hands of the villains!

In real life though the KG-9, the predecessor of the US Tec-9, had a somewhat chequered and troubled history; Swedish company Interdynamic AB of Stockholm designed the MP-9 9mm machine pistol in the early 1980s, with production commencing in 1983. It was intended as an inexpensive, fast-firing firearm based largely on the workings of the older Kulspruta Carl Gustav M/45. Interdynamic, though only ever produced a very small quantity of registered MP-9 submachine guns due to lack of demand. The MP-9 was made in two configurations, one with select fire capability and a collapsible stock and one that was fully automatic only with no stock. Production numbers are believed to be less than 50 in total, perhaps as few as 24 in select-fire with the collapsible stock.

Interdynamic did not find a government buyer, so as with many designs the MP-9 was taken to the US market as the open-bolt semi-automatic KG-9 pistol. Interdynamic set up a US subsidiary intended principally to market a semiautomatic version, named the KG-9 after the two principal partners George Kellgren (who went on to form Kel-Tec) & Carlos Garcia. However, controversy plagued the design as it was quickly found that the open bolt design was too easy to convert to full-automatic fire and because of this the ATF forced Interdynamic to redesign it into a closed-bolt system, which was harder to convert to full-auto. This variant was called the KG-99. This was actually the model that made frequent appearances on Miami Vice (The KG-99 was actually manufactured in Florida for a time), where it was legally converted to full-auto by Title II Manufacturers.

In 1985 the TEC-9 appeared; this was essentially the MP/KG-9 under another name, as it was designed by Intratec, an American offshoot of Interdynamic AB. The TEC-9 was made of inexpensive moulded polymers and a mixture of stamped and milled steel parts. The TEC-9 was produced from 1985 to 1994. Following the 1989 Cleveland School massacre in California, further controversy ensued as the TEC-9 was placed in that state’s list of banned weapons. To circumvent this, Intratec rebranded a variant of the TEC-9 as the TEC-DC9 from 1990 to 1994 (DC standing for ‘Designed for California’) with purely cosmetic changes!

The TEC-9 and, eventually, TEC-DC9 variants were listed among the 19 firearms banned by name in the USA by the now expired 1994 Federal Assault Weapons Ban (AWB). This ban caused manufacturer of this model to stop and forced Intratec to introduce a newer model called the AB-10, a TEC-9 Mini without a threaded muzzle/ barrel shroud and limited to a 10-round magazine instead of a 20- or 32-round magazine. However, it accepted the standard capacity magazines of the pre-ban models, 10-, 20-, 32-, 50-round box magazine and even a 72-round drum magazine!

In 2001, following ‘by name’ bans in not only California but also in New York, New Jersey, and Maryland, and mentions in many well-publicised shooting incidents, Intratec went out of business and production of the AB-10 model ceased. Although still found on the used firearms market, the TEC-9 and similar variants are still banned, often by name, in several states.

I have to admit that actually getting the history behind the KG-9 down was one of the most intriguing bits of shooting-related detective work I’ve ever performed, as the story of the ill-fated machine pistol takes twists and turns and ducks and dives with changes of design, name and nomenclature during its relatively short production life no doubt in some part to the legal wranglings surrounding it!

In my mind Redwolf Airsoft (RWA) have made a thoroughly bold move in replicating the KG-9 for their own production AEG, as it really is a unique firearm, and given the attention to detail it’s an absolute gem! What makes me say this so straightforwardly? A whole heap of things is the answer. The RWA KG-9 AEG is a replica of the real steel, Swedish-made Interdynamic KG-9 Open Bolt machine pistol, the one that first hit the USA back in the 1980s. The KG-9 is the real deal, not to be mistaken from some of the ‘Frankenguns’ that followed it.

Now RWA are not the first company in the world to make an airsoft KG-9, but thus far they’ve all been a little ‘meh’ when it came to build quality and performance. RWA of course would never settle for ‘might have been’, instead they’ve gone right back to the drawing board to create a replica that is both visually stunning right down to the trademarks on the magwell and runs like an express train!

The overall construction is a combination of nylon fibre and polymer, just like the real thing, with the steel body, barrel and magazine adding a nice heft; not only does it look spoton, but it feels great in the hand too, although the pistol grip might feel a little large for those with smaller hands as the motor obviously sits inside. Above that is a fusion gearbox with a lower which is compatible with Tokyo Marui V2 AEG gears and the upper part has a PTW style piston, hop up, chamber and inner barrel. How RWA have managed to cram all this high-end gubbins into such a trim package is somewhat beyond me, and the KG-9 is FAR from being the Automatic Electric Pistol (AEP) that some have erroneously described it as; this a full-on airsoft machine pistol, with performance to match the aesthetics!

The attractive boxed package bearing Redwolf’s tagline ‘High Quality Replicas That Trigger Your Imagination’ contains the KG-9 itself, two steel 90 round magazines, and a special 7.4v LiPo battery with a mini-Deans connector designed specifically to fit neatly and snugly into the slim-line handguard; to get to the battery compartment within the handguard, you will need to remove the thread cover (front outer barrel section) which reveals a 14mm CCW thread, then the cap behind it. When you remove the cap you can easily slide the battery into the compartment and it all but disappears, a very neat and well thought out solution to getting a great power plant into a very restricted space. Thanks to the CCW threading you can also fit a suppressor, elongating the length of the AEG overall, meaning you can increase the length of the inner barrel for even greater accuracy. If you’d like to fit a tracer unit for night games this is equally as simple.

Controls on the KG-9 are very simple too, as basically all you have is a magazine release at the rear of the magwell and a slideacross safety catch positioned immediately in front of the trigger, giving quick operation to switch from safe to full-auto very quickly indeed; the KG-9 will actually only shoot in full-auto mode, but this isn’t a faulty design as the real steel version was a full-auto only machine pistol. Some might look at this a little askance, as the KG-9 screams out CQB; as many CQB sites enforce a semi-only rule due to the short engagement distances involved in that type of game it is indeed a shame, and if the KG-9 didn’t perform just so well outdoors this could be a problem.

Not so! Once again when you get this tiny little AEG onto the range you’re going to be in for a proper shock! If you visit YouTube you’ll find one of the excellent RWA videos featuring Tim ‘Redwolf’ Selby who takes the KG-9 to a range and manages to hit a human-sized target (Jimbob!) from 80 metres away, which is great performance for any AEG straight out of the box! I won’t say that I managed this astonishing feat myself but I will tell you that using a .30g BB I did manage to hit my sandbag target at 50 metres unerringly. Of course virtually every UK site will chrono your replica using a .20g BB, so it was back to my NUPROL testers to check this out. The KG-9 once again did not disappoint, delivering a 10 round string at a mean of 328fps, absolutely right on the money!

With an overall length of 398mm and an unloaded weight of just 1470g, the RWA KG-9 is one tidy little package which you could happily skirmish with all day long; it’s almost light enough to fire like a pistol, so if you fancy channelling your inner ‘gangsta’ then this is most definitely a replica for you, especially as Redwolf offer limited edition models where the upper metalwork is finished in gold or silver! With an RRP of £394.50 this is not going to be an impulse buy, but given the quality of the finish, the standard of the internal parts, and the sheer performance, it’s a price very well justified. Having had hands-on with the KG-9 I’m intrigued to see what RWA bring to the market next, but I believe that we can all rest assured that whatever it may be it will be every bit as good as their Interdynamic KG-9! For more information on the KG-9 and a whole host of other great airsoft replicas from all the leading brands please visit uk.redwolfairsoft.com.