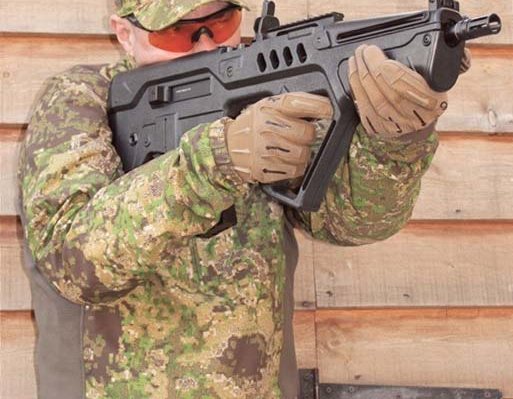 I have to admit that I am a fan of bullpup designs; I love a relatively long barrel, for good accuracy in a short compact package which is great for CQB. A bullpup really is a superb compromise gun.

These days more and more armies of the world are operating regularly from vehicles and helicopters, so having a short weapon is a sensible way forward, with the SA80 being the bullpup used by UK Forces for some considerable time. Other countries worldwide were taking interest in the design as well; in 1982, with the experience of many conflicts, mostly mechanised in nature, Israel Military Industries (now Israel Weapon Industries) began a long, direct collaboration with the Israel Defense Forces (IDF) Research & Development teams in order to develop a new standard issue weapon for the IDF. By September 2003, the IDF trials concluded and the TAVOR MTAR 21 rifle was chosen as the standard issue weapon for their infantry troops. So the TAVOR is a rifle design that is right up-to-date and will be fully issued to all Israeli forces by 2018. Many designs, including the SA80, have already ceased production and are due to be phased out just after the TAVOR issue has been completed, so if you want something for a thoroughly modern loadout then the TAVOR is certainly worthy of your consideration!

What makes the IWI TAVOR 21 I received for testing even better though is that it’s not the infantry MTAR variant but rather the short-barrelled CTAR 21 which was designed for use by IDF Special Forces and Commandos! This makes it an incredibly compact package at just 700mm overall whilst the inner barrel is still 420mm!

Externally the TAVOR is certainly ergonomic with a large, well-angled pistol grip which has an entire handguard around the trigger; if you play during the winter months this could be a real bonus as the rifle is easily operated even with bulkier insulated gloves. Ahead of this is a comfortable ribbed forend which fills the hand very nicely; this forend hinges open when the large button beneath the cocking handle is pressed, revealing a reasonably sized battery compartment. The stock is fixed but even players of smaller stature should find this a comfortable replica to use.

The selector switch is located on the left-hand side of the TAVOR immediately above and behind the trigger and is clearly marked ‘S’ for safe, ‘R’ for repetition (or semi-auto), and ‘A- for full-auto; this works well with an audible click as the modes are engaged. The magwell is located behind the pistol grip and I found that most STANAG or M4-type mags worked well. The magazine release protrudes in front of the magwell and is easy and instinctive to use.

Although the TAVOR is built almost entirely of plastic (remember the real deal is polymer), mould lines are pretty much non- existent and everything feels solid. The TAVOR has a flip up front sight and a flip out rear sight plus a section of rail on top which screams out for an EoTECH, ACOG, or Meprolight optic!

The internals are workmanlike; the gearbox is a unique 8mm bearing custom model that is still fully upgradeable and benefits from an easy spring change design. The internal gears are metal and, all-in-all, everything looks solid. The motor is a short high torque type. The hop unit is the simple wheel design found in many airsoft rifles and is accessed by pulling the cocking handle to the rear; this opens the ejection port cover where you’ll find the hop-up adjustment wheel itself. A nice feature is that the port cover stays to the rear until you depress the bolt release (which you’ll find just behind the magwell), so hop adjustment is simple.

The TAVOR is great fun! It comes with a small 8.4V NiMH battery and a wall charger but I usually dispose of these and work with a decent quality LiPo and in this instance I popped in an 11.1V NUPROL version which gave superb results both in rate of fire and trigger response. Testing on .20g BBs, which fed unerringly from the metal 300 round HiCap mag that comes with the gun, I got an average of 329fps which is absolutely spot- on. Range and accuracy were also very good; once the hop-up was set I was happily hitting ‘Figure 11’ targets out to 50 metres plus.

Overall the IWI TAVOR is a really nice package, and the best bit is the price, as you’ll be able to pick one of these up for under £200. It’s a heck of a lot of gun for the money, is well-made, performs well, and looks great. If I were putting together a modern loadout this would be a replica that would most definitely be high on my list!

For more information on the IWI TAVOR 21 and for stockist details please visit www.armex-airsoft.co.uk