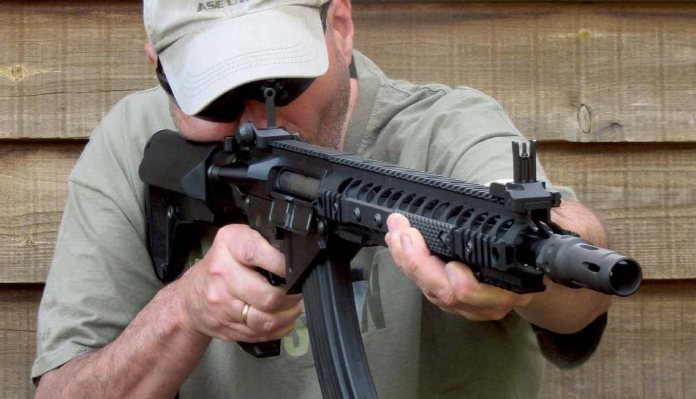 So, are you AR or AK? The world of airsoft is dominated by AR models, and there are so many takes on this that it’s genuinely mind-boggling! If you want an out-and-out MK18 in 6mm form then it can be yours, and if you want something that might grace the hands of John Wick or a Three Gun World competitive shooter style, then with a little judicious searching of parts, pretty much any AR derivative can be in your hands pretty quickly. And the same can now be said of airsoft AKs as there are so many accessory parts available, along with some pretty darn-fine tacticool AKs that are good to go straight from the box if you want something unique, or, indeed, like to keep things completely and utterly classic.

However, you might like the idea of something that was truly one of a kind, and one that melds together the best elements of both platforms, and I’d say if this is the case then you may wish to turn your attention to the Knight’s Armament SR-47.

Back in the early days of The War on Terror USSOCOM units looked for every advantage they could find whilst operating behind the lines and the concept of an AR/M4-style platform that could use the ammunition they would find easily in their AO led to a procurement order for such a weapon. Knight’s Armament Company won the contract for the initial prototype, a run of just six rifles; Knight’s already had a history of modifying the issue M4 carbine into SOPMOD platforms, and to them this was just simply an extension to the self-same program, albeit with a technical curveball thrown in due to both calibre and loading differences. The finished weapon was thought to be the best of both worlds, an AR style rifle that used standard AKM magazines and ammo.

Born from the idea of a soldier being able to resupply behind enemy lines and operators being able to leave a smaller footprint to conceal their presence, the SR-47 combined the familiar AR ergonomics with the legendary 7.62x39mm cartridge used by the AK-47/AKM. The SR-47 was specifically designed to allow operators to utilise munitions acquired from the enemy in situations where resupply was not an option. Additionally the SR- 47 had the added benefit of sounding like a typical AK and not an AR which helped mask an operator’s presence as well as being able to stay covert by not leaving any evidence such as casings from a NATO weapon.

A few years ago I had the chance to get my hands on one of BOLT Airsoft’s first takes on the SR-47 style in the form of the KeyMod Cobra; I loved the idea of an AR/AK hybrid, and at the time managed to unearth a lot about the real world rifle which endeared it even further to me. However, the non-military styling of the Cobra left me with a little feeling that all was not totally right, and lovely rifle that it was, it got sold on after a while; I loved the rifle and the system, but for me the look was wrong. Recently though I discovered the SR-47 URX3.1 version from BOLT Airsoft, and the love affair was immediately rekindled!

The URX 3.1 Rail is a free-floating, fully modular replacement forend for the AR platform, and unlike traditional quad rail designs, the URX 3.1 incorporates short sections of M1913 Picatinny rail at its front and rear ends for mounting tactical accessories, eliminating the commonly unused sections of rail for reduced overall weight and a more comfortable grip. There are also four integral QD sling swivel sockets provided for ambidextrous sling compatibility, and by adding URX 3.1 Rail Panels and additional rail sections you can customise the URX just as you like it. This is beautifully rendered on the BOLT replica, and little extra touches like the use of a Knight’s-style 7.62 QDC muzzle device really pulls the whole look together. Externally everything is solid as a rock and tight, and you get an outer barrel assembly, receiver set, buffer tube and various operating items made from a combination of alloy and steel for a durable finish which also provides a realistic weight; where polymer/plastic has been used on the real thing (pistol grip, rail covers and stock) BOLT use a high density nylon fibre which is a tough material that feels great!

BOLT Airsoft’s rendition of the SR- 47 features their Bolt Recoil Shock System (BRSS) to create simulated recoil for enhanced realism. In addition to the recoil system, BOLT has also greatly reinforced the gearbox and the rest of the internals to withstand the powerful recoil shock and to enhance the rifle’s durability and performance. The BRSS produces kinetic energy from the gearbox and transfers that energy down through the receiver (produced by the piston’s movement, transferred to a recoil weight in stock tube) and into your shoulder through the stock. The development team at BOLT Airsoft have created a powerful recoil system which once was a revolutionary idea but is now one that has been thoroughly tried and tested. BOLT is not hiding any reduced quality parts inside their rifles to bring the manufacturing cost down either; the rear-wired gearbox is a work of art! Forged steel gears seated in low friction 8mm bearings will handle cycling all day long. You’ve even got an aluminium spring guide, one-piece metal hop-up unit, high-torque motor, and precision inner barrel as standard; are you getting the idea?

The BRSS system also has some great advantages other than the obvious felt recoil and these include:

High Durability – BRSS gears are made strong, which makes them stronger to handle the strong recoil shock, which longevity to the AEG’s life.

High Compatibility – BRSS Gearbox system parts offers a high degree of compatibility with other brands’ gearbox parts. Over 90% of BRSS parts are compatible with those available on the market.

These advantages give players lower long-term ownership costs and a wider choice for possible repairs, upgrades, modifications and customisation. That means you can upgrade to your hearts content if you really feel the need to improve on what’s available out of the box.

But what happens on the range, I hear you ask? All this clever stuff is great, but how does the SR-47 actually shoot? The answer is… well, very well! Given that the internals are the latest iteration of the tried and tested BRSS, I had no doubt that out-of-the-box performance would be right up there, and I wasn’t to be disappointed! Using .20g RZR BBs the SR-47 delivered a massively consistent chrono reading of 0.92-joule/315fps which is absolutely perfect for use on all UK sites. I did try the BOLT with a number of different brand AK magazines, and sadly it does seem a little picky in this respect; of all the models I tried other than their own only my old MAG brand AKM/AK-74 bakelites (which frankly fit anything!) seated well. This could be a small downside if you’re buying as a team.

With the 600BB steely hi-cap magazine topped off with .25 RZRs it was time to set the hop and have at it! Like all ARs the SR-47 has the fire selector above and to the left of the pistol grip, and with semi engaged the BOLT went off with a righteous crack and a good jolt in the shoulder, sending BBs straight downrange to target at 30m. Cranking up to full just upped the giggle factor as the thump in the shoulder seemed to increase, but affected accuracy not at all!

As you’ve probably guessed, I’m really excited about this rifle. BOLT Airsoft kick pretty much every other manufacturers’ butt when it comes to this AR/AK hybrid, not only with the awesome recoil system but also through value for money, along with quality of parts and construction. The SR-47 appeals to me as it is based on a real military weapon platform, albeit one that was subsequently mothballed, but it also fits neatly into the wellfinanced contractor loadout bracket which all airsofters love, and as a collector of unusual firearm replicas, this also is a piece of history that I’m finally pleased to have in the armoury.

If you love your AR but want to steer away from the herd then the BOLT SR-47 URX3.1 may well be the rifle you’ve been looking for!

Sincere thanks got to the guys at NUPROL (nuprol.com) who distribute the BOLT brand in the UK as always for providing the test rifle.