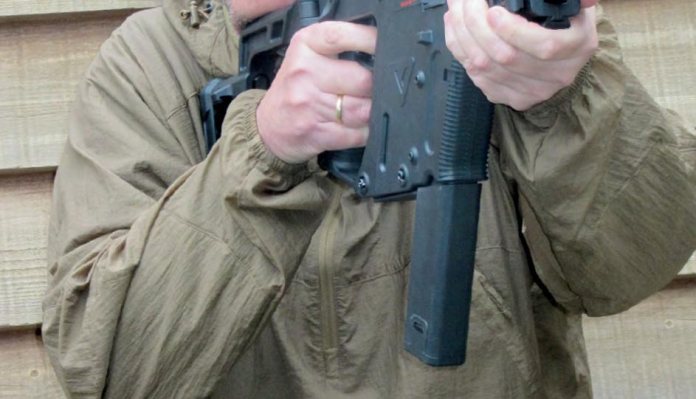 I’ll get this out of the way from the start; if there is any single firearm out there that rightly or wrongly deserves the sobriquet ‘Marmite gun’, then the KRISS Vector is probably it. Although, as a firearms enthusiast, I understand that the Vector is a major step forward in design, operation and indeed recoil management, I’m afraid to say that its angular, boxy appearance rather leaves me cold.

The firearm itself (is it a carbine, an SMG, or what?) is certainly a revelation verging on a phenomenon, and even though I struggle with its strange, otherworldly ergonomics of course, just like anybody else I wanted to have a go to see what all the fuss was about. So, it was at SHOT Show earlier this year that I joined the line at the KRISS stand on Media Range Day to do my duty.

Now, Media Range Day is a wonderful thing that sends most British gun journos into a bit of a frenzied cold sweat; lined up are all the big names in the shooting world, both civilian and military, with their wares laid out ready for you to try. Handgun Sir? Which would you like? And how many magazines would you like with that? M4 with heat mitigating foregrip, please step this way and yes, you can use the full-auto function. It’s enough to make you weep with joy!

But I have to admit that even though on most stands you might have to wait a few minutes for your chance to shoot, with KRISS it was more ‘take a ticket and we’ll let you know your slot, probably an hour or two…’. Although the KRISS Vector is by no means a new firearm now, the buzz that surrounds it is really quite amazing, and this shows no sign of slowing down, given that it has featured in video games such as ‘Call of Duty’ and ‘Ghost Recon; Wildlands’ and movies like ‘Resident Evil: Retribution’; I wanted to fire it to see how it performed but for many of the younger firearms bloggers and vloggers it was a must. They simply had to try out the gun that they use in their games and had seen on the big screen!

The KRISS Vector series is a family of weapons based upon the parent submachine gun design developed by KRISS USA, formerly Transformational Defense Industries (TDI). KRISS USA is the North American extension of the Swiss KRISS Group. Product development, manufacturing, and distribution take place across the USA, from Virginia to California. KRISS USA is an avant-garde company, which is evident in their products. Their diverse world-wide team give them a unique global, perspective, which is the foundation for their distinctive approach. With their sights firmly set on the future, they aim to change the world, one innovative design at a time. At KRISS USA, design is more than what is on the surface, it’s the careful coordination of function and form. Their stated mission is to provide ground-breaking ideas, quality craftsmanship, and distinctive design.

The story begins back in the spring of 2007, when TDI announced the Kriss Super V submachine gun; the name ‘Kriss’ comes from an Indonesian sword or a large knife with flame-like blade. What made the Super V the model that went on to be known as the Vector, so special, was the KRISS Super V Recoil Mitigation System; this is an articulated mechanism, which allowed the bolt and an inertia block to move downward into a recess behind the magazine well. The theory is that at the end of this travel, the energy is transmitted downward rather than rearward, thus reducing the felt recoil.

When fired, the barrel axis is in line with the shoulder as in the AR/M4 family, but also in line with the shooter’s hand. This is intended to reduce muzzle climb when combined with the off-axis bolt travel, though it also greatly raises the sight line in comparison to the bore axis. The initial prototype model by TDI achieved a rate of fire of 1500 rounds per minute (RPM), though this was brought down to around 1200 rounds per minute on the production models.

Evolution of the species

The KRISS Vector family has undergone two generations of modification. The Gen I version is the baseline model of the Vector family. It was later replaced by the improved Gen II version, which features a redesigned pistol grip and trigger, optional factory Cerakote coatings in olive drab or flat dark earth, in addition to the original flat black, and has the swing angle of the safety lever reduced from 120- to 45-degrees. It also eliminates the opening above the barrel for the original weapon’s optional Surefire weapon light, since these are no longer manufactured.

The KRISS Vector submachine gun is only available for military and law enforcement use. It is chambered in either 9x19mm Parabellum or .45 ACP. It features a 5.5-inch barrel (with an option of a 6.5-inch barrel on the Gen II version), a folding stock, a flipup Midwest Industries back-up iron sights (BUIS) (MagPul MBUS on Gen II weapons), a Picatinny rail for mounting various optics/ scopes, and either two mode fire selector (single and full-auto) or a three mode fire selector (single, two-round burst and full-auto).

Semi-automatic versions are produced and available for the US civilian market. There are three main configurations, the Vector CRB, Vector SBR and Vector SDP. They can be chambered in either 9x19mm Parabellum, .45 ACP, .40 S&W (using Glock 22 magazines), 9x21mm, 10mm Auto (using Glock 20 magazines), or .357 SIG (using Glock 31 magazines).

Calibres such as .22 LR, .40 S&W and 9x19mm Parabellum were mentioned when the gun was first released. The Gen II versions with multiple design changes including a new 9 mm variant were confirmed at SHOT Show 2015, and the .22LR version is eagerly anticipated. The original Vector was designed to accept standard Glock 21 pistol magazines; a special ‘MagEx 30’ kit was available to convert a factory 13-round .45 ACP Glock magazine to an extended high-capacity version, though this is now marketed as a ‘25+’ round kit. The newer 9x19mm Parabellum versions instead use standard Glock 17 magazines.

A bit of a beast!

In fairness, when I did finally get a chance to shoot the KRISS Vector in the USA, I have to admit that I was actually very impressed; the 9mm version was incredibly stable, even when fired full-auto, although if I’m honest the .45 ACP military version was still a bit of a handful when on ‘full chat’! Although it didn’t really change my opinion in relation to the ergonomics, I will admit that even with a powerful pistol calibre round it was fairly straightforward to stay on target; imagine if you will saying that about the Thompson prior to the Cutts Compensator…

So, in the real world, the KRISS Vector is pretty much as ‘cutting edge’ as it gets right now, and of course airsofters globally wanted a bit of that action! Back in 2012 (yup, only a few years after the real product launch!) KWA got together with KRISS Arms to produce a rather excellent gas blowback version of the Vector; I have friends who still own them and swear that it’s the best GBB SMG they’ve ever owned!

Sadly, though, and to this day nobody really knows why, KWA and KRISS parted ways, and production ceased entirely. A couple of other airsoft manufacturers have tried to produce a Vector, but in my mind, although one in particular is pretty okay, these companies are running a huge risk as KRISS are notoriously jealous (rightly so!) of their patents and IP.

Regular readers of my reviews will know I have a total bee in my bonnet when it comes to ‘correct and proper Licencing’ in relation to replicas, and KRISS have taken this one step further by creating the new AEG Vector under their own well-respected ‘KRYTAC’ airsoft banner. This means of course that everything about the replica, and I do mean everything is, 100% correct in terms of scale, function, and of course those all-important trademarks. I’ve got to say a hearty “well done” to KRISS for this; although the Vector AEG took its own sweet time to arrive, what has finally hit the stores is as good as it possibly can be, and some other airsoft manufacturers should take note of this!

What I found in the unassuming KRYTAC brown box was a little work of art; as the AEG is based on the current ‘real deal’, it appears as the Gen II model. The build quality is absolutely first rate, with absolutely no creaks or groans anywhere, which is quite incredible given that the whole thing is made of polymer (apart from the bits that should be metal like the real thing), including the 95 BB MidCap magazine (you can nudge in around 100 if you’re careful). The markings are clear, the Fire Selector operates incredibly smoothly, and the Gen II style skeletonised stock is both incredibly easy to use and adjustable for length.

Although the Vector is supplied with perfectly good folding ‘iron sights’ as standard, it also features a full length top RIS rail, allowing users to mount all manner of optics and accessories, and there’s an additional short rail section lower front should you wish to mount a foregrip. Internally, the Vector AEG features all of KRYTACs usual high quality internals, providing excellent performance straight out of the box. The Vector’s real party-trick is its unique MOSFET, which allows the AEG to accurately replicate the real Vectors two-round burst function, in addition to Semi and Fully Automatic.

Taking it to the range, and knowing how the regular KRYTAC ‘M4s’ perform I was quietly hopeful, and expectant, of good things. Using a .20g NUPROL RZR BBs, the Vector chrono’d perfectly at an incredibly consistent 1.06-Joule/339fps, which is a power level that will make you welcome at any airsoft site in the UK. I also hoped that the performance would also carry over to accuracy and again I was not disappointed as the Vector happily spat a .25g RZR bang on target to the furthest extent of the 30m range, and I’m betting that it still had a lot of ‘legs’ when it got there!

With the rock solid externals and the excellent performance I’ve come to expect from KRYTAC internals, I have to say that the long wait for the KRISS Vector has been worth it. As a 1:1 scale, fully licensed and trademarked replica of the Vector this is as good as AEGs get… even if you don’t like the styling!

Thanks to www.shieldpsd.com for the loan of the test sample; please do visit their website for further information on the KRISS Vector, and to take a look at the rest of the KRYTAC range of AEGs. Luckily, now they’ve finally arrived, you find the Vector in stock with most good airsoft retailers nationwide!