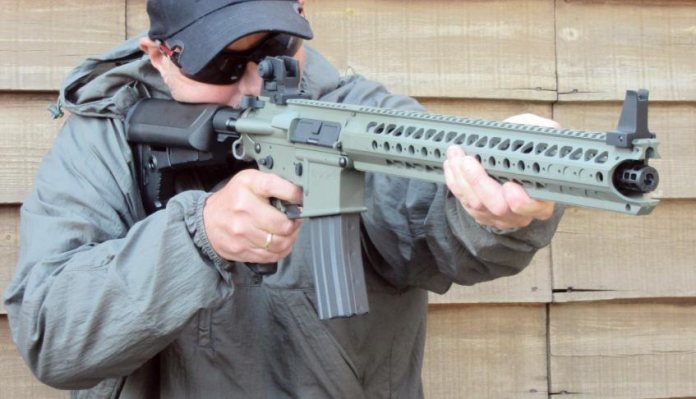 Before I get rolling with the review this month, let’s recap on who Krytac are, and how they entered the airsoft industry. In 2014, it became apparent that Swiss firearms manufacturer KRISS was thinking about getting into the airsoft market in their own right. Initially having partnered up with another airsoft manufacturer, KRISS made it quite clear at SHOT Show that year that they would be forging their own path, and they have done so successfully since then with their KRYTAC range of carbines, rifles and LMGs. KRYTAC, established in Southern California in 2013, came out with a pretty bold, no-nonsense statement:

“The shooting community is expanding every day, with new shooters and new shooting sports rapidly developing. KRYTAC’s focus is to cultivate that community with innovative products that lay the foundation for safety, for building shooting skills, and for these to evolve with the shooter.

The KRISS Group’s worldwide perspective stimulates innovation in KRYTAC designs to achieve new levels of efficiency, power, ergonomics, and aesthetics in every product. Every process of development is aimed at offering the best possible ownership experience, from beginning to end, KRYTAC strives for excellence.

The KRYTAC team is comprised of highly experienced professionals who have come together with one common goal, to elevate your expectation of performance, value, and service.”

Of course, KRYTAC had the might of the KRISS Group behind them; KRISS are no strangers to out of the box thinking and mechanical innovation in that they are the people behind the cutting-edge, “real steel” KRISS Vector. What they achieved with the Vector was something that not only hadn’t been done before, but that hadn’t even been thought about; so, it seems perfectly logical to me that they might apply that same approach to their airsoft range. When it came to KRYTAC replicas, that’s exactly what we saw from the outset, and they’ve continued to innovate and be up with the latest firearm trends since then.

KRYTAC initially brought originality to their product offering; although, with their initial models, we saw just four ‘M4’ style and one LMG variant, KRYTAC really put their own character into things, with clever little touches like distinctive battery stocks and Keymod rails as standard. One thing is for certain, the finish of these airsoft guns has been consistently superlative and they ooze quality, and with solid internals that have now been subject to nearly three year’s ‘wear and tear’, they’ve carved themselves a well-earned niche in the market.

Internally, on all the models, you get a reinforced 8mm bearing gearbox, with an integrated MOSFET to regulate electronic signals and to protect the trigger contacts. The corners of the gearbox that surround the cylinder feature a smooth radius, as opposed to a 90° angle, to prevent fracture; neatly, the gearbox shell features a small ‘window’ on the left side, where lubrication can be applied directly to the gears or piston. This ‘window’ is also convenient for inspecting the angle of engagement with the gearbox without disassembly.

Additional gearbox features include a modular spring guide system that will allow the spring to be changed without completely disassembling the gearbox, although you do still need to remove the gearbox from the receiver to make the change. KRYTAC pistons are made of a durable, lightweight polymer and feature four metal teeth, with the 2nd to last tooth absent. The cylinder head is padded with an enlarged sorbothane buffer to optimise the angle of engagement and to absorb energy from the impact of the piston assembly, extending longevity. The material for the gears has been specially formulated to be very strong, with test figures on the KRYTAC gears being much higher than that offered by many other manufacturers. Turning all of the drive train components, is the KRYTAC high torque ‘20K’motor, capable of 30,000 revolutions per minute unloaded!

There’s commonality of internals across the range of KRYTAC models and they also share some other features. The aluminium lower receiver features a stamped KRYTAC logo and accepts AR/M4 style magazines. Additional features include an ambidextrous fire selector and on the carbine and rifle models a locking ‘bolt’ that provides easy access to the KRYTAC rotary hop-up system. The KRYTAC rotary hop-up has 15 adjustment settings and a numbered adjustment wheel for a quick reference point to determine how much hop is needed.

To summarise, on paper the KRYTAC models certainly tick all the boxes, and their licenced ‘LVOA-C’ certainly keeps up that trend! Now, you may wonder what the LVOA-C is, but it’s a very detailed copy of the real rifle that shone like a beacon in the US shooting press for a while and then quietly disappeared. The truth of the matter is that War Sport and designer Joey Boswell were best known for the LVOA-C rifle, but few people knew about their top-notch manufacturing capabilities. In-house, War Sport could machine just about anything imaginable and was at one time supplying OEM parts to other manufacturers in the firearms industry. After a while though, things started to go suspiciously quiet, with both the website and social media feeds going dormant; in January, this year, it was confirmed by www.recoilweb.com that War Sport had been acquired by ZRODelta, a firearms company with some big American industry names behind it, and we’ve yet to see what this actually means in reality, but I for one am keeping an eye out!

The LVOA-C itself is a direct gasimpingement operated rifle, based on the AR platform. It features a proprietary barrel shroud with an integrated muzzle brake/ flash suppressor, which serves its intended manufacturing purpose to be a close quarter combat weapon with a low visibility operation application (LVOA). The assault rifle features chamber options of 5.56X45mm NATO and .223 Wylde. The LVOA weighs 7-pounds (3.2kg) unloaded, 7.5-pounds (3.4kg) with a 30-round magazine) and measures 35.5-inches (90cm) in length (32.75-inches (83.2cm) with a closed stock. To eliminate the need for a suppressor whilst still offering the lowest possible flash signature, the LVOA system offers a two-part solution: first, the incorporation of a BattleComp 2.0 full muzzle break, pinned and welded to the end of the barrel, and second, a flash suppressor integrated in the rail system that surrounds and manages the gases from each fired round. It has been widely used by private military companies for overseas and domestic operations due to its reliability, low recoil and visual signature.

As far as gaming goes, the LVOA-C has already been used in video games and movies for its unique design and instantly recognisable barrel shroud, and you can find it used in Ubisoft’s ‘Tom Clancy’s The Division’ and ‘Tom Clancy’s Ghost Recon Wildlands’ video games. Of course, due to the allure of both the real firearm and its gaming connections, airsofters wanted one. A number of companies created ‘lookalike’ Wire Cutter rails very quickly, but given their industry connections, it was to be KRYTAC that launched a licenced replica that mimics the ‘real deal’ in every way, even down to the correct trademarks.

Now, this is all well and good, but at the end of the day, it’s not all about looks, is it? All the KRYTAC AEGs work surprisingly well on a 7.4V NUPROL LiPo, giving a trigger response that is far crisper than you would expect; when you crank things up to an 11.1V though, the trigger response is as good as anything I’ve tried, but it is recommended that you run your LVOA-C on nothing more than a 7.4V. Chrono testing was carried out using .20g NUPROL RZR BBs; the hop-up is easily set, thanks to the precise rotary design, and once set, stays where it should. KRYTAC have looked carefully to legal power levels in all the countries they sell to worldwide; so, I was not at all surprised when the LVOA registered a consistent and UK site (and now legal!) limit-friendly 0.95-Joule/320fps; KRYTAC promised that models coming to our shores would be legally compliant, and they’ve obviously lived up to their word! Also, as I suspected, the accuracy is right up there, with the LVOA sending the BBs out a good 30m plus, with impressively tight groupings.

Of course, the feature which sets the LVOA apart from the other Krytac models, is the design of the exterior; the KRYTAC LVOA-C comes pre-fitted with a beautifully branded, alloy War Sport receivers, wire cutter rail system, ‘Top Hat’ flash hider and DEFIANCE pistol grip, a combination that makes this weapon quite a head turner! The War Sport rail has a full length contiguous 20mm rail along its top, whilst its sides and bottom are free of rail to keep the profile as slim as possible, but the included rail section can be attached wherever you like your accessories to sit.

When it comes to KRYTAC, all you need to do is buy your chosen AEG, in this case the rather splendid LVOA-C, add a decent battery and BBs and you’re in the game! All European models are CE Certified and bear all the legally required markings, which will guarantee conformity to all European directives and safety standards. In addition, KRYTAC AEGs will be offered in models/power ranges to meet country specific regulations, which of course now with the PCA in effect, means that you can be assured of staying ‘legal’.

For a ‘skirmishable’ carbine with some absolutely stunning and unique looks, the licensed LVOA-C really does tick all the boxes for me and with a retail price under £400, it’s one hell of a beast! Whilst ZRODelta have indicated that the real LVOA-C will move forward, this is still far from certain at the time of writing; so, if you’d like to own a piece of firearm history in airsoft form, then the KRYTAC LVOA-C is most definitely something to consider long and hard!

KRYTAC offer both the LVOA-C and LVOA-S models in either black of a rather nifty Foliage Green colour, coming in at £389/£399 respectively