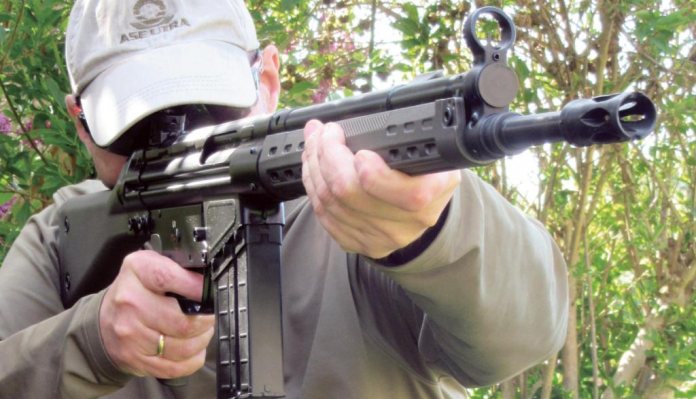 I must admit that as much as I love all the models in my (ever-expanding!) collection of airsoft replicas, there’s one in particular that holds a special place in my affections, and that’s a custom ‘MC51 SBS’ that was built for me by the great team at www.fire-support.co.uk, about 2006 if memory serves me correctly. This is an absolutely corking creation that used the internals from a Tokyo Marui MC51 with the metal externals of a Classic Army ‘Offizier M41’ and MP5SD, and although it is still an absolute ‘tack driver’, it did set me back a pretty penny at the time I had it built!

A similar firearm, the Fleming Arms HK51, was not actually made by H&K at all! The HK51 is usually a cut down and modified G3A3 modified to take MP5 furniture and accessories. The first commercial version was created by Bill Fleming of Fleming Arms in the USA and existed before Heckler & Koch made the HK53; I looked this up before I embarked on this review and found that a ‘Fleming HK51’, if you can find one, is now selling for some pretty HUGE sums, and by this, I mean US$14,000 plus in A1 condition! This is a replica that I long to build, especially with mixed wood furniture, but to date there’s not been a G3 donor that I’ve thought suitable.

Last year, though, LCT Airsoft, who I hold in very high regard for their AK replicas, started to tease us online with pictures and videos of their new G3 prototypes, and subsequently this was released to market with very little fanfare. Fast forward to IWA 2017 though, and on the LCT stand were numerous G3 variants with both different magazines and a whole host of accessories to choose from! This is absolutely superb, and for around £330 you can now have your very own, rock-solid steel G3A3 AEG!

The Automatisches Gewehr G3 is a 7.62x51mm NATO battle rifle developed in 1956 by the German armament manufacturer Heckler & Koch GmbH (H&K) in collaboration with the Spanish state-owned design and development agency CETME (Centro de Estudios Técnicos de Materiales Especiales), but the development of what was to become an absolutely classic ‘battle rifle’ had a somewhat circuitous route to final form!

The origin of the G3 rifle can be traced back to the final years of World War II, when Mauser engineers at the Light Weapon Development Group (Abteilung 37) at Oberndorf am Neckar designed the MKb Gerät 06 prototype assault rifle, chambered for the intermediate 7.92x33mm Kurz cartridge. After some modification, the rifle was given the designation StG 45(M) (Sturmgewehr 45(M) or ‘assault rifle’!) but was not produced in any significant numbers and the war ended before the first production rifles were completed.

The German technicians involved in developing the StG 45(M) were taken to work in France at CEAM (Centre d’Etudes et d’Armement de Mulhouse). The StG 45(M) mechanism was modified by Ludwig Vorgrimler and Theodor Löffler at the Mulhouse facility between 1946 and 1949 but as the French were then engaged in the Indochina War and being the second NATO contributor, the adoption of this new weapon was cancelled for both financial and political reasons.

Online sources tell me that in 1950, Vorgrimler moved to Spain, where he created the LV-50 rifle chambered for the Kurz cartridge and later, the proprietary 7.92x40mm CETME M53 round and at this point, the rifle was renamed the Modelo 2. The Modelo 2 drew the attention of the West German Border Guards (Bundesgrenzschutz. Not willing to accept a cartridge outside of the NATO specification, the Germans asked CETME to develop a 7.62x51mm version of the rifle; the resulting CETME Model A was chambered for the 7.62x51mm CETME cartridge. Further development of the rifle, with input from H&K, produced the CETME Model B, which received several modifications, and, in 1958, this rifle was accepted into service with the Spanish Army, as the Modelo 58, using the 7.62x51mm CETME round.

In 1956, the Bundesgrenzschutz cancelled their planned procurement of the CETME rifles, adopting the Belgian-made FN FAL (G1) instead. However, the newly formed West German Army (Bundeswehr) now showed interest and soon purchased a number of CETME rifles in 7.62x51mm NATO for further testing. The CETME, known as the Automatisches Gewehr G3, according to German classification, competed successfully against the Swiss SIG SG 510 and the American AR-10 to replace the previously favoured G1 rifle. In January 1959, the Bundeswehr officially adopted the CETME proposal. The West German government wanted the G3 rifle to be produced under license in Germany; purchase of the G1 had previously fallen through over FN’s refusal to grant such a license; gotta love politics, eh?

In the case of the G3, the Dutch firm Nederlandse Wapen en Munitiefabriek (NWM) held production and sales rights to the CETME design outside of Spain. To acquire production rights, the West German government offered NWM contracts to supply the German Air Force (Luftwaffe) with 20mm ammunition. Production of the G3 was then assigned to Rheinmetall and H&K. The latter company already had ties to CETME and had worked to further optimise the Spanish rifle for use with the full-power 7.62x51mm NATO cartridge (as opposed to the downgraded CETME variant).

In 1969, Rheinmetall gave up production rights to the G3, in exchange for H&K’s promise not to bid on MG3 production, and eventually in 1977, the West German government ceded ownership of G3 production and sales rights exclusively to H&K. The rifle proved successful in the export market, being adopted by the armed forces of over 40 countries. The G3 was, and in some cases, continues to be produced under license in France (MAS), Greece (Hellenic Arms Industry), Iran (Defense Industries Organization), Luxembourg (Luxemburg Defense Technologie), Mexico, Myanmar, Norway (Kongsberg Våpenfabrikk), Pakistan (Pakistan Ordnance Factories), Portugal (FBP), Saudi Arabia, Sweden (FFV), Thailand, Turkey (MKEK) and the United Kingdom (Royal Ordnance).

In May of this year, I had the honour and privilege to be one of two ‘Brits’ attending ‘WarZone 2018’ in Crete, which was an absolutely cracking 72-hour MilSim run by Rethimno Airsoft. As always, I carried a tried and trusted E&L AK variant, but I was quite surprised to see so many airsoft ‘G3’ models in the hands of Greek players; that was, of course, only until I realised that the G3 is still the service rifle of the Greek Army and that many players who had served in the Hellenic Armed Forces hold this rifle just as dear as we do the SLR! Although, like many others, the Greek SF units tend to gravitate towards the ‘M4’, your average Greek soldier is still likely to be issued a somewhat aging G3! There has been talk of standardising to 5.56mm NATO, with the G36, but for various reasons, political, economic, and allegedly ballistic, this has yet to happen.

Now, the G3 is not a new replica for airsoft players and I’m certain that many of those Greek players were fielding upgraded models from Classic Army, Tokyo Marui, and even JG but I would stress here the word ‘upgraded’, as in my experience, all the existing variants need some degree of work to make them completely ‘field ready’.

Not so with the new LCT! This stunner of an AEG comes ‘skirmish ready’ straight out of the box! The Taiwan-based company has been designing and manufacturing high-quality airsoft products for many years. LCT offer products that are not only cost effective, but also reliable in performance and solid in build quality. Like their other AEGs, the G3A3 features the same high-quality external build expected of LCT products, utilising 9mm bearings, a 25000rpm motor, a brass, chrome-plated cylinder, and both the cylinder and piston heads are CNC Aluminium Alloy. The wiring throughout is high-quality 18AWG, which will give good, reliable long-term performance.

Overall, the features are excellent, as it comes with a full steel upper receiver, lower receiver, flash hider, front sight and cocking handle; the upper can accept any standard claw mount for optics intended for use on a G3 or MP5. The rifle also has a beautifully achieved slim-line forend; the furniture is available is either black or green (the issued colours), and a sliding stock variant is on the way. Enhanced by high-quality externals, scrupulously achieved internals and extreme attention to detail, the G3A3 is a strong, reliable rifle for those interested in something with a definite history, and that is stunningly different from most airsoft rifles out there!

On the range, it was first off to chrono, and as I suspected, the test rifle came in perfectly for the UK market at a mean of 1.04-Joule/336fps using .20g BBs. After correctly setting the hop at 10m CQB range on semi-auto using NUPROL RZR .28BBs, the thing was absolutely devastating straight out of the box; with a 515mm/6.02 inner barrel it was definitely a case of hitting with every BB! Moving out to 25m, I switched the safety lever to its full-auto point (the replica G3 features the now-classic ‘H&K Pictograms’) and I was soon knocking over my plates on controlled three-round bursts. Out to the extent of the range, shooting prone and back on semi, I was still hitting the plates with each and every BB.

With the current ‘Airsoft Trend’ towards close-quarter encounters in ‘urban’ settings, then I could say that LCT have chosen the wrong time to release a full-length, 1026mm/4.5kg ‘battle rifle’ but I think I’d be lying! ‘Sunday Woodland Skirmishes’ are every bit as popular as they have always been, and for this setting, the LCT G3A3 will be absolutely devastating. The rifle comes as standard with a 140 BB steel MidCap magazine, but HiCaps are available if you really want them; for me, this would be an AEG to use in a DMR role though, where picking your shots and accurately achieving them is of paramount importance. That said, I do feel it could finally be time to create that classic Fleming Arms HK51 at long last!