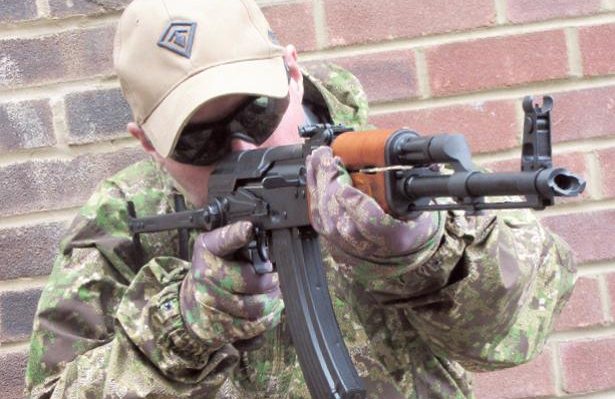 Those of you that know me personally know that I have a ‘thing’ about the works of Comrade Kalashnikov, and my gas AK/SVD OPFOR variants are my ‘go to guns’ for MilSim events, as they function perfectly like the real deal, operating from 30-round magazines, and send BBs downrange with alacrity. In actual fact, if you’re a lover of the AK then there’s never been a better time to own an airsoft version, as currently there are some cracking variants out, both gas and AEG, on offer at great prices.

LCT have really been making some inroads into the ‘AK’ market place with their excellent range of both modern and classic models, and having tested a good few of the variants decided that I would add on one of their battery powered models to my ‘armoury’ to ensure that I would have a reliable ‘Kalashnikov’ to see me through the cold weather months of the year. I have been running my gas models on NUPROL 4.0 Black Gas with exceptional results, and even at sub-zero temperatures they have continued to run well, but having an AEG in the collection would give me ‘belt and braces’.

The two gas AK models I run are both AKMs, so I decided that I’d stick with that model; on one of my visits to Fire Support I took the opportunity to review the LCT range again, and although I do like a full wood butt, I made the decision to run with an under-folding AKMS (LCKMS as described by LCT) just to round things out.

When I brought it home with me, I couldn’t wait to get it out of the box and check it over; the weight was good at 3.5kg (7.7lbs.) and it really felt solid in the hands thanks to its all-steel receiver, and it struck me as a thing of perfection, thanks to the deeply burnished wood front-end furniture (like the real deal, be aware this does weather quite fast!) and the dark brown pistol grip; this latter part is slightly oversized due to the fact that it houses the motor but the colour is excellent. The days of perfectly mated wood and metal have pretty much long gone with new polymer and glass-filled polyamides helping to save those forests, but there’s just something about that woodwork that brings a smile to your face!

In the real world, though, the AKM (‘Avtomat Kalashnikova Modernizirovanniy’ or ‘Kalashnikov modernised automatic rifle’) was the main service rifle in use with the Russian forces for many years; introduced with the Soviet Army in 1959, it was officially replaced in Soviet frontline service by the AK74 in the late 1970s, but remains in use worldwide.

Compared to the AK47, the AKM featured detail improvements and enhancements that optimised the rifle for mass production; some parts and assemblies were conceived using simplified manufacturing methods. Notably, the AK47’s milled steel receiver was replaced by a U-shaped steel stamping. As a result of these modifications, the AKM’s weight was reduced, the accuracy during automatic fire was increased and several reliability issues were addressed. The AK47’s chrome-lined barrel was retained, a common feature of Soviet weapons, which helps to resist wear and corrosion, particularly under harsh field conditions and near-universal Eastern Bloc use of corrosively primed ammunition.

Never get to heaven…

The AKM’s receiver, compared to the AK47, is stamped from a smooth 1.0mm (0.04-inches) sheet of steel. To the U-shaped stamped sheet metal receiver housing a rear stock trunnion and forward barrel trunnion are fastened using rivets. The receiver housing also features a rigid, tubular, cross-section support that adds structural strength. Guide rails that assist the bolt carrier’s movement, which also incorporates the ejector, are installed inside the receiver through spot welding. As a weightsaving measure, the stamped receiver cover is of thinner gauge metal than that of the AK47.

The main variant of the AKM was the AKMS (S for ‘Skladnoy’ or Folding), which was equipped with an under-folding metal shoulder stock in place of the fixed wooden stock. The metal stock of the AKMS is somewhat different from the folding stock of the previous AKS47, model as it has a modified locking mechanism, which locks both support arms of the AKMS stock instead of just one (left arm) as in the AKS47 folding model. It is also made of riveted steel pressings, instead of the milled versions of most AKS47s. The AKMS was designed especially for use by paratroopers, as the folding stock permitted more space for other equipment when jumping from a plane and then landing.

For those not yet conversant with LCT, the Taiwan-based Company has been designing and manufacturing high-quality airsoft products for many years, including 1:1 scale, Mil-Spec, replica products for both the airsoft skirmisher and law enforcement/military training. LCT’s long-standing tradition of craftsmanship and innovation is met with a commitment to deliver superior performance and ultimate reliability.

LCT offer products that are not only cost effective, but also reliable in performance and solid in build quality. The LCT AK variants are ultimately the next evolution of the AEG. The AKMS features the same high-quality external build expected of LCT products, utilising 9mm bearings, a 22000rpm motor, a brass, chromeplated cylinder, and both the cylinder and piston heads are CNC Aluminium Alloy. The wiring throughout is high quality 18AWG, which will give good, reliable long-term performance.

Overall, the features are excellent, as it comes with a full steel receiver and barrel assembly, beautifully achieved wooden fore-end, correctly coloured pistol grip, and a rock-solid folding stock. Enhanced by high quality externals, scrupulously achieved internals and extreme attention to detail, the AKMS is a strong, reliable rifle for those interested in training with the AK platform and that want a viable alternative to gas for the depth of winter.

With all that technical information in hand, I really wanted the AKMS to be a performer, so it was time to grab a battery and some BBs and head to the range. Now, LCT recommend a 11.1v Li-Po as the power source for the AK, and as I didn’t have exactly that battery it was a bit of a fiddle getting one to fit as the compartment is a bit tight; given that, the battery sits neatly under the top cover. As you can imagine, this is quite a narrow, short space, so you really need to get the right battery, and I found that a NUPROL NP Power 1450mah 11.1v 30c LiPo Nunchuck Type could be squeezed in with care. You need to be really careful with LiPos in AKs, due to the fact that you need to slam down the top cover to secure everything, so it’s easy to ‘nip’ the battery, and in fact the only time I ever had a LiPo ‘cook off’ was with an AK47!

With this small issue overcome, it was time to get the beast to chrono, and as I suspected, the test sample did indeed come in perfectly for the UK market at a mean of 1.09 Joule/343fps using .20g BBs as Fire Support state.

With this out of the way, it was time to set up my plates at 10-, 20-, and 30-metres to see what the AKMS was capable of. After correctly setting the hop at 10-metres CQB range on semi-auto using some lovely NUPROL RZR .28BBs, the thing was absolutely devastating straight out of the box; with a 435mm/6.02 inner barrel it was definitely a case of ‘double tap, hit’. Moving out to 20-metres, I switched the safety lever to its full-auto mid-point (the replica AKMS still works just as the real thing does in this respect) and I was soon knocking over those plates on controlled three-round bursts. Out to the extent of the range, shooting prone and back on semi, I was still hitting the plates with only the very, very occasional flyer.

After a thoroughly entertaining couple of hours on the range, it was time to clear, fold the stock under and put the AK back into the guncase, and I was certainly sad when this time came. If you like your Russian gear, are a regular OPFOR player, or just want something different, then the LCT LCKMS could be the right RIF for you; it has all the benefits of a full-stocked variant, with the added versatility of the under-folding stock, along with all the benefits of a top-quality AEG, so you really can’t go wrong with this one!

My sincere thanks go Fire Support, who kindly supplied the test rifle, which has now been purchased by yours truly! They currently have the LCKMS available for sale at an extremely reasonable £230.00 for the rifle with a standard steel 130BB magazine, and £13-15.00 will get you spare Mid or HiCap mags (you can use other AK mags but the LCT offerings are excellent quality, especially the ‘plum’ 130BB model!); do bear in mind that these prices could fluctuate given what’s going on with exchange rates right now. If you’re interested in finding out more, please contact Fire Support via their website www.fire-support. co.uk, or call them on 01733 247 171.